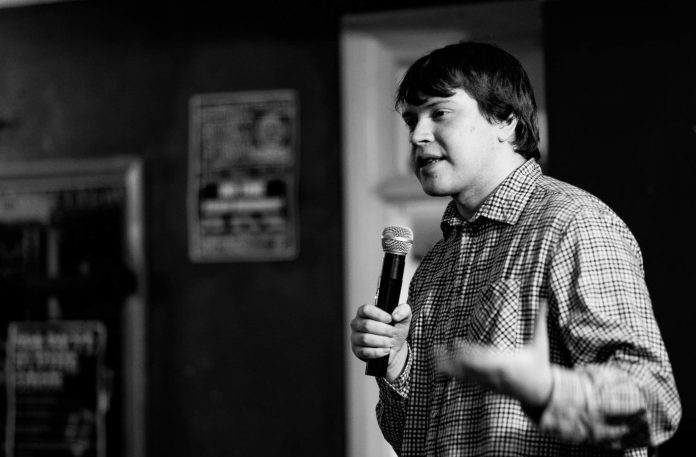 YOU SHOULD HAVE BEEN HERE LAST WEEK: “The best open mic comedy night this side of the Smoke!”

Your heart is pumping harder than after that time you finished an entire Asda Extra Special Cheese Board Selection in one sitting. Your leg is shaking like a dog a few hours after accidentally eating a square of Dairy Milk.

You drain your pint and lose all confidence in the material you’ve prepared, scrawled onto your trembling hand in smudged biro.

Yes, it’s Thursday night at the James Street Tavern and you’re about to get up on stage at the You Should Have Been Here Last Week comedy open-mic night to make a room full of strangers collectively exhale slightly out of their noses.

The cosy dwellings of the gastropub provide an appropriately intimate setting for an evening with some of Oxford’s finest amateur comic talent.

Playing the Tavern is a real treat, the fourth wall between performer and audience is infrequently shattered by hecklers desperate for their own ego trip, and the genuine, unfaltering support of fellow comedians (who, this being free comedy, oftentimes may make up some 80% of the audience themselves) contributes massively to the accessibility and warmth the night exudes.

With a  menagerie of first timers, rising stars and even some relatively big local names, there truly is something for everyone at You Should Have Been Here Last Week.

Each comic offers up their own unique brand of hilarity, from confessions of a milk addict to the best French philosopher Simone de Beauvoir joke you’ll hear this decade, or even an appearance from Samuel Beckett himself, the sheer quantity of quality comedy you get for the price of a condom at your local sexual health clinic is truly staggering.

Make no mistake: this has got to be the best free open-mic comedy night this side of the Smoke!

You run through your opening line again and again in your head as your name echoes through the amplifiers of the PA system. You step up to the plate, tearing the microphone from the stand and instantly forgetting everything you were going to say.

But, no sooner has your 5 minutes of modest local attention begun, it’s over. You bounce off stage and slink over to the bar, head giddy with delusions of your own self-importance.

The next morning, as your stewed teabag is enveloped in the polyethylene embrace of your food caddy,  your flatmate walks into the kitchen. “So how did your comedy thing go last night?” he asks. “Oh”, you smile, “you should’ve been there…”

You Should’ve Been Here Last Week, every Thursday at the James Street Tavern, James Street, Cowley.