Home Do Books “Writing gets me out of bed in the morning”. Crime writer Mick...
Facebook
Twitter
WhatsApp

“Playing the author rather than the writer is enjoyable, but I have to go and lie down in a dark room afterwards,” Mick Herron chuckles.

We are talking about literary festival season, most notably Oxford’s, at which Mick is appearing. “It’s been quite nerve-wracking going back out into the big, wide world because authors are often quite introverted anyway, but the audiences are so switched on and interested. They’ve read my books and want to know more.”

And who can blame them? 15 books, a million copies sold worldwide and Slow Horses, the first in the Slough House series airing on Apple TV on April 1 starring Gary Oldman and Kristin Scott Thomas.

“oxford university was a bit of a culture shock. I was surrounded by people from wealthy backgrounds. But at that age you just adjust”

Remarkably unperturbed by this Hollywood turn of events, Mike Herron’s own life story is as screenworthy.

Born and bred in Newcastle, he loved spy thrillers, went to the local state school, had a great English teacher, and got into Balliol Oxford to read English, not something many pupils managed from his neck of the woods. “It was a bit of a stretch,” he admits with typical Herron modesty.

“Oxford was a bit of a culture shock. It was very much a public school environment so I was surrounded by people from wealthy backgrounds. But at that age you just adjust. I didn’t sit in the corner but I did feel a bit out of place. Put it this way, other people were much more comfortable there. They had all had GAP years.

“But if I hadn’t got in I would have gone somewhere else, without thinking twice about it, and been a writer anyway,” he shrugs.

Why not go the full Ian Fleming and make his spies more glamorous? “Because that’s not what my life is like and I write about what I know”

Not wanting to go back up North because “Thatcher had ensured it was a black spot for employment”, Mick stayed in Oxford, and wrote. “I didn’t have an aptitude for anything else,” he says simply.

Finding a job as a sub-editor and commuting to London, returning home every night to write, Herron achieved moderate success with his Zoë Boehm detective series, but when he began the Slough House thrillers, his publishers failed to sign up the second novel in the series.

And then came along his publishing fairy godmother John Murray who had absolute faith in Mick and his talents. “Yes I always say that authors need luck, and that was mine. After republishing my books a second time you’d understand if they’d given up, but no they kept going because they had absolute faith, so I owe them an enormous amount,” he says.

The public finally caught on, and here we are now, talking about his literary festival appearances around the world, his global audience, the ensuing TV series and the notoriety that involves.

“people’s failures are more interesting and plausible than their successes. You have to write about the bad days as well as the good”

Did it matter that such acclaim took so long? “I’d come to terms with it after my fourth novel Reconstruction didn’t sell. It gave me the freedom to basically write whatever I wanted and that was a great lesson actually, that all my feelings of satisfaction were involved in the writing itself. So when success did come along, it meant I could carry on regardless,” Herron says.

15 books in, veteran agent Jackson Lamb now presides, as played so succinctly by Gary Oldman. So why are Herron’s characters so human, so evidently flawed? Why not go the full Ian Fleming and make his spies more glamorous? “Because that’s not what my life is like and I write about what I know.

“Besides people’s failures are more interesting and plausible to me than their successes. You have to write about the bad days as well as the good.”

“And I’ve seen the first episode of Slow Horses and I’m absolutely thrilled with it. It’s very true to the book. Having been in the writer’s room I feel like I’ve been a part of it, but ultimately it’s their world not mine, and it’s more than eight years ago since I met the producers to talk about this, so I’ve moved onto the next one which is more diverging.”

“writing still totally enthrals me. Ultimately what matters is what I’m working on today. That’s the reason I get out of bed in the morning”

So does Herron visualise the characters as he goes along? “Visualise?” he asks. “No writing for me is much more about paragraphs and sentences, metaphors. I don’t really apply a visual element, more a vague sense of my eye on the page rather than a process in my head. It’s more about the rhythm of the sentences.”

Is he a nightmare to live with then if he’s so immersed in his work (Mick lives with his partner Jo in Summertown)? “I do need a bit of a decompression chamber when I finish my working day, but I am still reasonably civilised,” he laughs.

Always destined to be a writer then? “It feels that way. I’ve always been immersed in other people’s stories which naturally lends itself to creating your own. I couldn’t do anything else. Writing still totally enthrals me.”

“Ultimately what matters to me is what I’m working on today. That’s the reason I get out of bed in the morning.”

Mick Herron will be appearing at Oxford Literary Festival: A Thrilling Life: the Slough House Series and interviewed by Triona Adams at The Weston Library on Saturday March 26. Go to https://oxfordliteraryfestival.org/literature-events/2022/march-26/a-thrilling-life-the-slough-house-series

The 25th Oxford Literary Festival runs from March 25-April 3. Go to https://oxfordliteraryfestival.org to find out more about the hundreds of events. 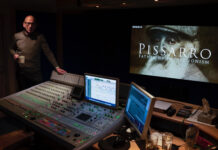 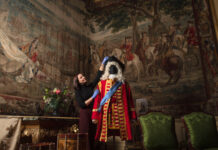 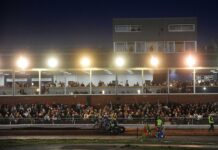