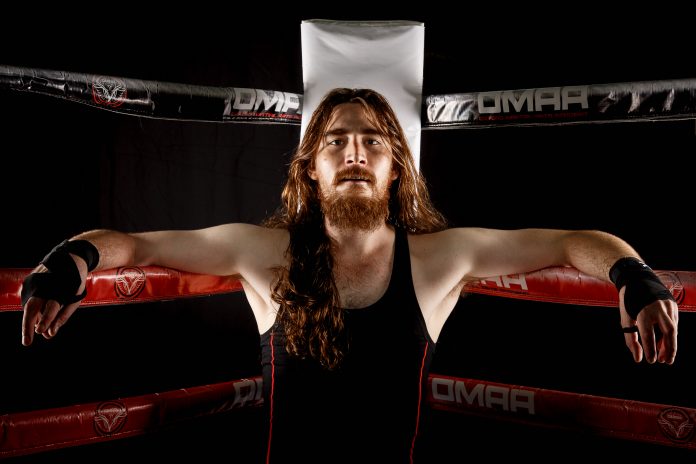 “Do you know someone with a stammer or a stutter?” director Alexandra Coke asks me.
“According to research, it’s very likely that you do. 1 in 100 people will have a stammer at some point in their lifetime, and while many stop by the time the reach adulthood, 3% of people do not.”

Alex, in the play Unspoken by Neil Rathmell, is one such person. He has carried his stammer with him for his whole life. During the course of the play we watch him literally fight with his stammer as he interacts with the shadowy character of The Wrestler.

Unspoken, by local and award-winning theatre company BMH Productions, is a mixture of play and research project. Everyone who watches the show will be asked if they’d like to participate by filling out a short questionnaire before and after the show.

Producer Catherine Woolley explains: “People who stammer are often represented negatively in fiction. Think of Professor Quirrell in Harry Potter, who fakes his stutter to conceal an evil secret.

“As part of this research project, I’ll be gathering data to see if watching a representation of a person with a stammer (in this case the character of Alex) can change people’s minds about a condition which carries a lot of stigma.”

During Unspoken, Alex re-lives his childhood as he tries to work up the courage to propose to his girlfriend. He thinks that he has hidden his stammer from her during their time together, but he’s worried that as soon as he starts to ask the most important question of his life, he will ‘block’ and be unable to say the words.

“It’s such an interesting show,” says director Alexandra Coke. “We’ve all learned so much about stammering – everyone I talk to about it knows someone who is affected, or ‘comes out’ to me as a stammerer themselves. It’s something that so many people hide successfully, by developing coping strategies around words they know are going to cause them problems.”

It was important to the whole company that the show felt authentic. “We found a script written in collaboration with a specialist Speech and Language Therapist,” Coke says, “which adds a layer of authenticity that you just can’t fake.

“The invention of The Wrestler as a manifestation of the stammer, holding Alex back and preventing him from speaking, is brilliant. So many people with speech impediments, or even other things like panic attacks, say that it feels like something is physically tackling them.”

“People who stammer often worry that they come across as stupid,” Woolley adds. “There is so much subconscious prejudice around it. We think people will find Alex’s journey in Unspoken moving, interesting and funny – and we also think they will come away with a different perspective.”

Join the cast of Unspoken for a night of theatre unlike any other.

Unspoken will be performed at the Old Schoolhouse on Hertford Street, 22 – 26 October. Tickets are available at www.oldfirestation.org.uk or 01865 263990.