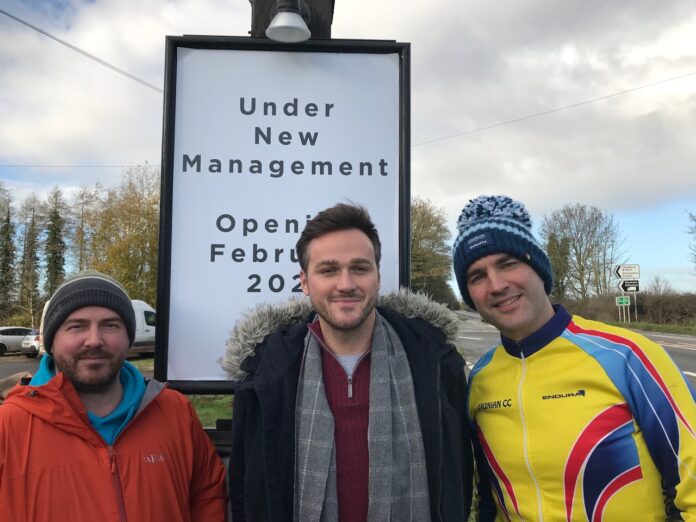 Woodstock is in for a big surprise next year when two of its pubs reopen with a new look, exciting menu, recently appointed executive chef, and a contemporary vibe.

The Duke of Marlborough on the outskirts is being revamped as a fun, family-friendly pub with an all day street-food style menu this Spring, while in the town centre what was The Kings Head hopes to open its doors as 11 Park Lane come April.

Headed up by director Chris Brewster, who has recruited general manager Rich Gibbs and executive chef Mike Wallis, the trio form a dream team who aim to bring the two sites back to life.

They are all on site at the historic coaching inn The Duke Of Marlborough just outside Woodstock when I arrive for a tour.

What was a traditional pub with rooms in need of some TLC and a thorough renovation, is set to reopen in February as a fully transformed family pub selling classic pub grub with a street food vibe. The 13 rooms are also being given a makeover and the huge garden being extensively redesigned.

Plans for an annual street food festival, Oktoberfest, Sunday night piano evenings and an enlarged kitchen are also on the cards, but for now it’s full steam ahead with the revamp.

A tasteful muted paint palette, velvet covered benches and a repurposed bar are all currently being implemented, while the traditional features which include two fireplaces, flagstones and parquet flooring are all being brought back to their former glory.

Planning to reopen in February, the team is ploughing on to complete the epic project in time, and as if that isn’t enough, they also aim to open what was The Kings Head as 11 Park Lane in April, although the name is yet to be finalised.

“We are giving the Duke Of Marlborough a big facelift throughout,” Chris confirms. “We planned to open earlier but there have been some setbacks due to the pandemic so we are now aiming for February,” he says as the builders get to work around him.

“But fundamentally The Duke is going to be a family-friendly pub and we are currently looking into an eco-friendly play area for the kids.

The Kings Head in the backlanes of Woodstock on the other hand, has been empty for over a year now, but Chris and his team plan to bring it back to life as a wine bar and have big plans. These include a tapas style sharing plate menu, wine by the glass, a redesigned island bar and revamped courtyard garden, as well as somewhere for the locals to watch the rugby.

Fundamental to both is the appointment of executive chef Mike Wallis, pictured above in red, who will oversee the new menus in both premises.

“Mike will play a pivotal role, and is fundamental to what we are trying to do here,” Chris says. Chris also runs The Taco Truck, a mobile street food company, hence the street food vibe of both premises.

Hailing from The Lucky Onion Group, namely The Chequers in Churchill, Mike is therefore all geared up with some exciting menus running from breakfast to dinner.

At The Duke Of Marlborough mixed in with the more traditional Duke burger, Hooky battered fish and chips and a great steak, the menu will be peppered with the likes of Korean smoked sticky ribs and slaw, koftas, sweet potato curry, Bratwurst hotdogs, Mac n’ cheese, a vegan burger, American pulled pork tacos and pulled duck bao buns.

For breakfast/brunch you can try everything from a full English to shakshuka (Turkish eggs) and breakfast donuts. Bar snacks include padron peppers, biltong and masala nuts and a well thought out children’s menu includes the likes of home made breaded chicken, grilled fish and sausages, and a choice of veg and extras. And desserts include churros with hot Belgian chocolate sauce, rum baba or a stewed apple and cinnamon taco.

“We hope people will come in for a drink and stay for a meal,” Chris says.

In Woodstock town centre, at what Chris hopes will be renamed 11 Park Lane, the international small sharing plate offerings will be more “high end”, boasting venison tartare, Iberian ham with truffle shavings, ceviche, babaganoush and of course some great cheeses, with wines paired by the glass or bottle.

Chris worked in the wine industry after leaving The Unicorn, so is keen to put his expertise into practice.

Better known for bringing The Unicorn in Deddington back to life with The Mole’s head chef Johnny Parkes, Chris has lived in Woodstock for 11 years, worked in the Kings Arms under David and Sarah Sykes back in the day, and is ecstatic at opening up in the Oxfordshire market town.

The 36 year-old says: ” I adore Woodstock – I feel like I know everybody there. And having grown up in Combe, I don’t know how many times I’ve driven past The Duke Of Marlborough.

“So when Star Pubs and Bars offered me both sites I jumped at the chance and hope to have 15 year leases on them both. They are spending £289,000 on refurbing what will be 11 Park Lane, while my investors in our new company BREWMISH LTD are concentrating on doing up The Duke.”

So why take on both? “I think there is a real gap in the market for them both so I can’t wait. It’s very, very exciting. Opening a pub in Woodstock has always been my dream, but while I’m hugely looking forward to opening up, I’m also enjoying this planning phase.”