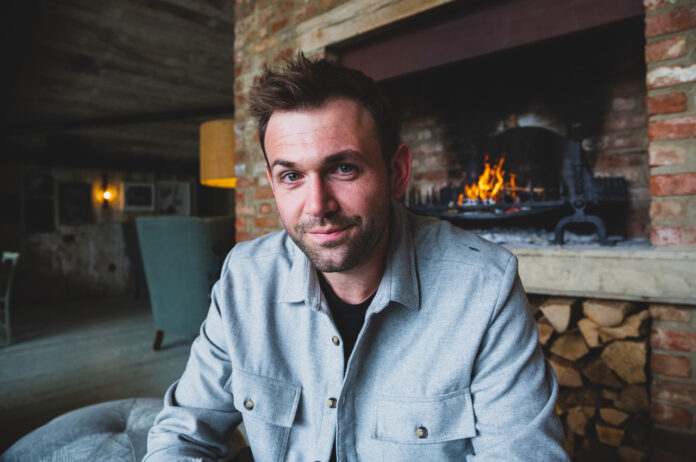 “I was in the cellar of the bar I was working in, when I found out that Cows Can’t Jump had won the Spotlight First Novel Prize,” Bicester’s Philip Bowne remembers.

“I remember reading the email on my phone and jumping around the cellar between the empty kegs. I must have looked mad, celebrating on my own in a pub cellar on a Tuesday afternoon as water sprayed everywhere around me!” he laughs.

Thanks to Billy, a disillusioned young man/gravedigger, who graces the pages of his debut novel Cows Can’t Jump, new author Philip Bowne is now the name on everyone’s lips, and since then made the Longlist for The Guardian’s Not the Booker Prize.

Philip is obviously over the moon that his debut novel has made such a big impact, meaning that all his hard work paid off: “The writing process was so hard. I’m terrible at organising my own life, let alone inventing a whole array of fictional lives and fitting them together into a narrative. So I think figuring out structure was one of the most difficult parts for me,” he says.

Born in Oxfordshire, Phil grew up in Bicester and attended Bicester Community College before going on to study English Literature and Creative Writing at the University of Gloucestershire.

Now 27, Phil played for Bicester Rugby Club as well as Slade Farm Football Club as a youngster and enjoyed travelling around the county to play at different clubs at the weekends.

So why did he write the book? “For fun, initially. I wanted to write a fun story that would entertain people. But then more serious themes surfaced throughout the text: gambling, religion, borders, downward mobility, freedom of movement, faith, and broken relationships.

“On a subconscious level, I think I probably wanted to portray what life is like growing up in the UK in 2016 under the shadow of Brexit, and being overwhelmed by that, while wanting to get on with your life and chase your dreams.

“But I didn’t sit down with that – or any specific intentions in mind. I had a set of characters, and I invented different ways to put those characters under stress and to create conflict in and around their lives. What comes out of that conflict, and how the characters respond to it, becomes what the book is really about.”

Set in 2016, while Britain awaits the vote on the EU referendum, Billy is busy dealing with his dysfunctional family. His grandfather just got engaged to a woman 40 years younger than him, his dad has become obsessed with boxing in the garage, and his mum is almost certainly having an affair.

When Billy meets Eva, a mysterious and exciting Swiss girl, he gambles everything for a chance to forge a relationship with her. His journey to find love takes him out to Central Europe, on an unpredictable road trip involving hitchhiking with truckers, walking with refugees, and a strange encounter with suicidal cows.

“I spent a year writing my first draft on and off, while working and volunteering in various roles and settings from repairing boats on Lake Como in Italy, working at a mountain lodge in Southern California, and volunteering with humanitarian charity Care4Calais in the Calais refugee camp,” Philip explains.

“When I returned to the UK, I moved to London and managed a bar at London Bridge. While working nights at the bar I had my daytimes free for writing, and this was when the bulk of the book took shape.”

Nowadays, Phil works as an in-house writer with classic British entertainment brand The Wombles which he describes as both a “dream job” and “the last thing he would have ever imagined himself doing.”

So can we expect a sequel. “I don’t know,” Philip laughs. “Where would I start?! I can’t imagine Billy settling down, can you?”

“Or as Billy says in the book, ‘I don’t think anyone really knows what they want to do. People pretend!'”

Cows Can’t Jump is published by Neem Tree Press. To find out more info about Philip Bowne or the book, go to: https://philipbowne.com

And all good local bookshops.

St Hilda’s Crime Fiction Weekend promises to be “most exciting and inclusive yet!”