Home See “We wanted it to be something new and exciting. Something bold. Something...
Facebook
Twitter
WhatsApp 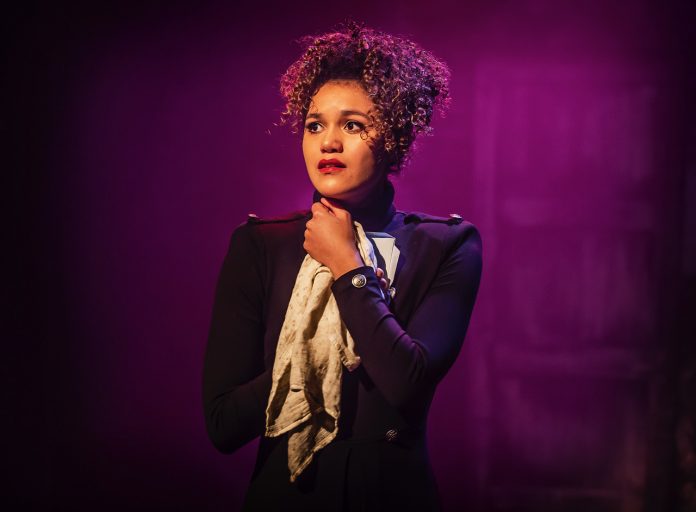 Playing Lady Macbeth is every actresses dream, and yet the famous Scottish queen remains entangled in the cliches and stereotypes which accompany her everywhere.

Emma McDonald’s new depiction of Shakespeare’s most famous female lead comes then as a breath of fresh air, thanks to The Watermill’s current tour.

“When I first got the role everyone showered me with opinions about Lady Macbeth, ‘she’s so evil’, and ‘unnatural’, and I thought ‘that’s not helping’, Emma tells me.

“So we have ensured it’s not just a tragedy, but a romance. As a result Macbeth (played by Billy Postlethwaite, famous actor Pete Postlethwaite’s son) and Lady Macbeth are much more human,” the 26 year-old explains.

“It means it is more of a game between these two central figures, to show what people are capable of, as well as two people in love,” she says.

“Because Lady Macbeth is so complex, and we are trying to get away from her being inherently evil and concentrate instead on the idea that she has lost a child, and offer a more visceral sense of her loss.”

Emma adds that during brain-storming sessions the Watermill Ensemble cast discussed how anyone would feel with a husband away at war, possibly for long periods of time.

“It seems inconceivable that she didn’t go with Macbeth, so maybe she stayed behind because she was having a child.

“That helped me, that she was frustrated and was dying to get into battle.”

And with so many of the central characters being played by women, from Banquo to Malcolm, this is highlighted even more, because Lady Macbeth isn’t the only strong female character.

Is that hard to replicate? “Powerful women don’t phase me. I come from a long line of strong Jamaican women,” Emma smiles.

So where do you start when staging the world’s most famous tragedy?

“We wanted it to be the kind of production we hoped to see at school, and never did. We are all muso-actors, and play instruments, so the score is incredible – there’s some Rolling Stones, Stormzy, Charli XCX, some electronics. It’s really cool. We wanted it to be something new and exciting. Something bold. Something accessible.

“So we drive it with live music to give it a gig theatre vibe,”

And what of those who would say she’s not old enough for the role? “I am playing these immense parts while I’m relatively young, but I have already done a lot of Shakespeare,” she says, “that or period dramas. I’m always in a corset, but I love it.

“And as for taking on this role, I was Lady Capulet aged 23, so I must have an old soul or something, as well as a deep voice,” she laughs. “You will have to come and see it and tell me.”

Part of the Waterperry Ensemble, based at the Newbury theatre, which specialises in Shakespeare, Emma is a enjoying a rep style life.

The ensemble is made up of five men and five women, and Emma has been there for three years now, having grown up in London and done a maths and science degree.

Famous playwright Michael Frayn saw her in a school play and soon she had an agent, and already has numerous TV and film roles on her CV.

She also plays the sax and violin, sings like an angel and has a love of words that holds her in good stead.

Does the glut of Macbeth’s currently flooding the market, worry her, considering it was recently shown by The National, the RSC and Blenheim Palace’s Rose Theatre?

“There will always be Shakespeare on. I’d don’t see that as a reason not to do it. I haven’t seen any of the other productions, but they won’t be as vibrant as this. It’s been so well received already.”

“We are having the best time ever. We just need people to come and see it.”

Having opened at Newbury, the cast is now on tour, starting at Oxford Playhouse from Tuesday- Saturday.