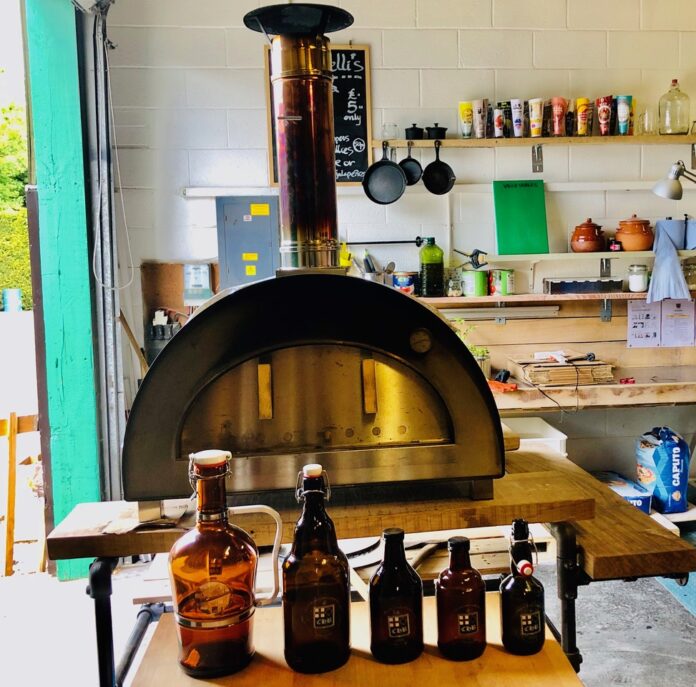 It’s been a mega year for Church HanBrewery with huge ups and downs, but one thing’s for sure – the microbrewery’s owners Christian and Luciana Gyuricza are fighting every inch of the way to survive the current crisis, and the tide is turning.

Six months ago everything was going swimmingly, the microbrewery in New Yatt had opened their first bar, Teardrop, in Oxford’s Covered Market which was doing really well. They also shared the wine bar Market Cellar next door, their summer festival diary was booked, sales were booming, and the future looked bright…..

But then coronavirus shut it all down and the Christian and Luciana were left wondering how to keep their business afloat.

“we specialise in smoked, fruit and wheat beers and brew in small batches so it’s more of a nanobrewery”

Sartorelli’s Pizzeria is the answer and the couple have installed an outdoor wood burning oven at the brewery in New Yatt, which is already proving a great success.

The external oven and kitchen allows customers to pick up their pizzas on site to take away, or sit on picnic tables in the nearby field to eat and drink, while socially distancing.

“We had a small business grant so bought the wood burning pizza oven and have stationed it outside because it’s safer for people to be outside at the moment,” Luciana, or Lu as she likes to be called, says.

Sartorelli’s Pizzeria has a small, simple menu for the handmade wood-burning oven pizzas (so named because Luciana’s maiden name is Luciana Asson Sartorelli) and customers can buy Church Hanbrewery beers alongside their Italian treats.

“We are reaching a whole new audience, so I think we will keep Sartorelli’s Pizzeria going even after the pandemic is over,” Lu adds.

Luciana and Christian came to England from Sao Paolo in Brazil in 2003 while Christian completed his MBA at the London Business School, setting up home in Church Hanborough, between Woodstock, Eynsham and Witney with their three children.

when the Covered Market released some new units, Church Hanbrewery opened the first bar there in the market’s 300 year-old history

Once the kids were a bit older, the couple decided to diversify and decided to open a microbrewery.

“We wanted to do something we loved, and we love cooking and experimenting with food and flavour, and brewing was something a bit different, something we could add to without competing too much with other people,” Lu explains.

“So we don’t brew traditional English ale, but specialise in smoked, fruit and wheat beers and brew in small batches so it’s more of a nanobrewery.”

“I find it really exciting making new flavours that people enjoy and make about 10 different beers at any one time. And if we make raspberry beer we use real raspberries, or for elderflower beer real elderflowers and so on.”

Starting at home in Church Hanborough in 2015, Church Hanbrewery soon expanded and they Gyuriczas moved the brewery to a farm in New Yatt.

So how has the reality been versus the dream? “It’s been great but much harder work than either of us expected. We hand bottle everything and the children help but we’ve all really taken to it,” Lu says.

The only problem was that with so few free houses, selling to pubs was difficult, so when the Covered Market released some new units, Church Hanbrewery opened the first bar there in the market’s 300 year history.

They called the bar Teardrop, which is the shape of their mobile bar, and then took on the unit next door with Eynsham Cellars to serve beer and wine on tap, The Market Cellar.

“Eynsham Cellars were the first people to stock our beer when we first started, so it seemed appropriate to co-run the unit with them, because they’ve been so supportive.

“It was working really well,” Lu said sadly. “We would do special evenings with the fishmongers so that people could eat oysters with our beer or wine. And we sold other local beers, ciders and products.

“Customers would come to try our new flavours and we loved their feedback because they knew they’d be tasting something they hadn’t tried before. We loved that challenge,” Lu adds.

“while we can’t wait to get back to our brewing and reopen our bar in Oxford, we are enjoying meeting new customers, feeding people and introducing them to our beer, at the brewery itself”

“So having to close has been heartbreaking, although we have the potential to reopen again in June 16.

When they closed, Christian and Luciana had to think of something else to do and Christian came up with the pizza idea.

“The locals love it because there isn’t a pub or anything here. There is a picnic area behind the brewery so people can walk, drive or cycle here, and stop for a drink and a pizza from 5pm- 10pm Thurs-Sunday.

“The beer is on draft and people bring their own glasses or receptacles, even though we have takeaway cartons. One guy even brings his blender jug to fill up with beer!”

So are Christian and Luciana enjoying their new metamorphosis?

“The weather has been a dream come true of course, and while we can’t wait to get back to our brewing and reopen our bar in Oxford, we are enjoying meeting new customers, feeding people and introducing them to our beer, at the brewery itself.

“Because what we miss most is seeing our regulars. Mixing in such an international crowd in Oxford is like therapy. So we will be keeping the pizzas going, that’s for sure.”

To order pizza go to https://www.churchhanbrewery.com/sartorellispizza 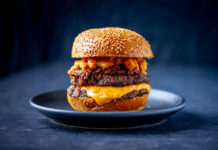 REVIEW: Fill your boots – The Dirty Bones Mac Daddy burger delivered in a box. But is it better than the real thing? 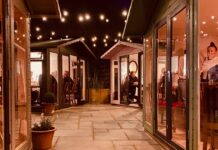