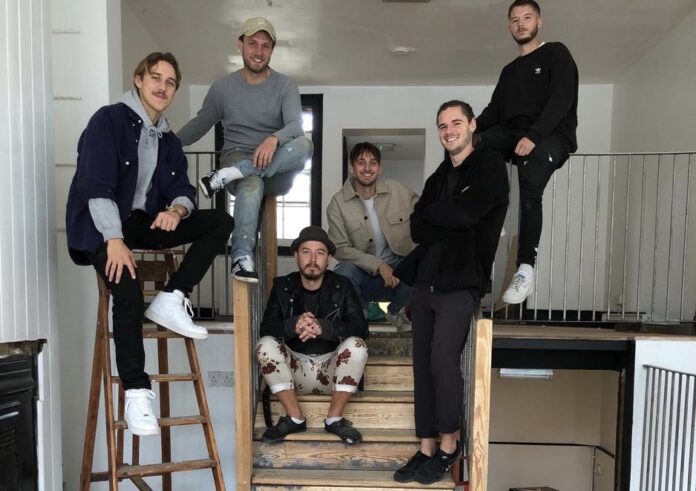 “We genuinely cannot believe how supportive the community in East Oxford has been. The locals here are unbelievably friendly and supportive, and the reception they’ve given us has been amazing. It is an awesome neighbourhood to be part of,” Green Routes Cafe’s Charles Howe tells me.

“We make great food whether you are vegan or not. We are not doing it to follow a trend but it’s our passion”

It means that the new plant-based cafe on Magdalen Road is doing a roaring trade in coffee, Sloppy Joe’s, pastries, breakfast baps, burgers and more; albeit in takeaway form for now.

And despite opening in December during the pandemic, the team is delighted with how things are going.

So who are the six new faces behind the collaborative vegan cafe/bar and restaurant? They actually originate from two different companies – Green Box Food Co and Routes Coffee Roasters, hence the Green Routes Cafe name.

“last year was brutal. suddenly everything was cancelled. WE WENT FROM HERO TO ZERO. UNTIL WE OPENED THE CAFE…..”

Green Box, a vegan catering company, was in huge demand at festivals as well as running plant-based kitchens in East London pubs.

Routes is based in Cowley and another firm festival feature. Often placed next to Green Box, the six soon grew close, and while business was booming they realised they could all bring something new to the table by opening their own cafe.

And then Covid exacerbated their plans, Charles admitting that last year was one of the worst ever. “We went from hero to zero. It was brutal. Green Box had been really gaining some traction but suddenly everything was cancelled.

“So while everyone thought we were crazy opening now, for us it made perfect sense. We needed a permanent base.”

The joint team tested out their theory by running a pop-up cafe at Chelsea Town Hall which went well, and decided to put their money where their mouths are, opening in December three days before the current lockdown.

So why Oxford? “We looked at five cities including Brighton, Reading and Winchester, but Oxford came up trumps, and when we saw the property on Magdalen Road that was it,” Routes’ Will Penfold tells me.

“We called our WhatsApp group ‘the dream’. Now we call it ‘the dream becomes a reality'”

“We’ve signed a ten year lease because this area already has a great foodie reputation with Oli’s Thai, Hamblin Bread, Taste Tibet and Magdalen Arms all right here on our doorstep,” he continues.

“They already have a huge community following, so this is ‘the dream’. That’s what we called out what’s App group. Now we call it ‘the dream becomes a reality'” he laughs.

The new decor, food and coffee speaks for itself, which is why the Green Routes Cafe is already so popular, East Oxford residents flocking, as well as a brief collaboration with social enterprise Tap Social.

We looked at five cities and Oxford came up trumps. when we saw the property on Magdalen Street that was it. We’ve signed a ten year lease.”

​As for being vegan, the team is keen to introduce us all to a more plant based menu and demonstrate how easy it is to make the swap, as well as its environmental advantages, as well as brining us a Pancake Day menu ready for Shrove Tuesday.

So do they worry about the competition? “It’s brilliant how many new places in Oxford are embracing a plant-based ethos and we all bring something new to the table, so no.”

“We serve delicious plant-based food for vegans, veggies and meat-eaters alike. We make great food whether you are vegan or not. We are not doing it to follow a trend but it’s our passion. We love cult classics and British dishes and now we have a permanent space to share it all with everyone,” Charles says before adding: “You’ve got to try our burger. It’s based on Ross’ nan’s nut roast menu recipe and it’s legendary,” Charles beams. “As for the Routes coffee…..”

A fantastic good news story then for the current times? “We just want to bring something really cool to the community,” Charles says. “We know what we’re offering is great and are confident in our product.

“Besides, the fun we’ve had already has been worth it, and it’s going really well so far. There is definitely a demand for it.”