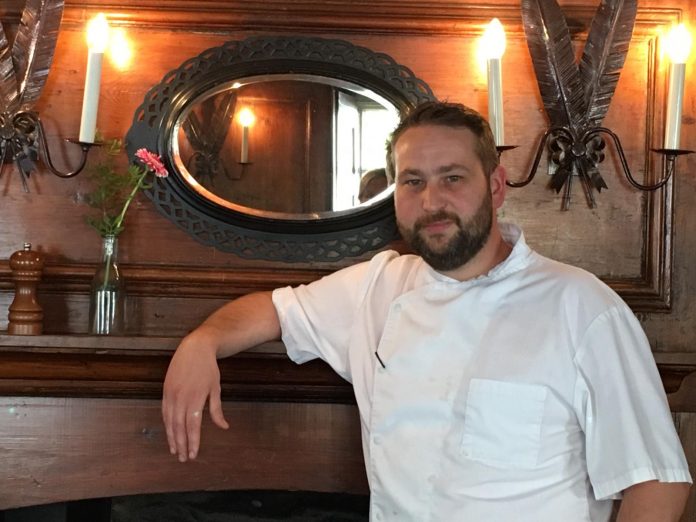 Head chef Ben Bullen is the name on everyone’s lips after news broke that The Feathers had been awarded two AA rosettes.

Having only joined Woodstock’s famous boutique hotel in February, the ambitious young man has already made a significant contribution to its culinary notoriety.

Delighted to be back in the driving seat, the 35 year-old said: “I set out to put The Feathers back on the culinary map and to ensure consistency, so it’s really exciting to be officially recognised.”

Getting a good team together and bringing new suppliers on board was key. Only then did Ben begin working on the new menu to make sure every dish was just right.

“I wanted to make the kitchens here a really happy place to work. Happy staff reflect well on the food, so I want my team to be proud of what we are achieving and to want to come to work.

Determined not to rest on his laurels, he added: ”It has been tough to get this far, but now that the ball is rolling, we need to keep it going. I couldn’t have done it without some amazing support from my team.

“But yes, it’s nice to make a name for yourself. I have worked with some amazing chefs but it’s great to be able to shine in your own right.”

Ben’s career has certainly come full circle, having been a junior sous chef at The Feathers just seven years ago.

The former Masterchef: The Professionals star was unsure what to do with his life, but with a firm love of food passed on from his mother, he enrolled at Banbury College to study catering aged 15.

And yet Ben’s CV speaks for itself, slowly working his way up the ladder, with stints at Gees in Oxford where he learned the value of good quality ingredients, Whately Hall in Banbury, Jesmonds of Highworth near Swindon, The Churchill Arms in Paxford, Mallory Court in Leamington Spa and most recently at Sudbury House under Andrew Scott and Nick Bennett.

“Andrew taught me so much and put me in such a good place to get me to where I am today,” he says. While at Sudbury, Ben entered Masterchef: The Professionals in 2017, getting through to the quarter-finals. “I think I conducted myself with dignity, but it is quite a terrifying experience,” he says.

Remarkably humble and unpretentious about his skills in the kitchen, Ben says he “doesn’t have a style” and “just wants to produce good quality food.’

Bearing in mind his signature dish is saddle of lamb with pea and mint fregola, pickled ewes cheese and chargrilled baby gem, and you begin to gauge just how modest he is.

In terms of ambitions, Ben wants to entice the locals back to The Feathers by creating a restaurant with a really good ethos and atmosphere.

“We had a local couple in recently who had been recommended by other locals and that’s what I want to see. That’s when I feel we are getting there,” he says. “Because you need a local clientele. And I think we are well priced for Woodstock.

“Other than that I just want to keep going and cook at a consistently high level. I want my food to make people happy.”

His new role also enables Ben to spend more time with his wife and young daughter, as they live nearby in Bladon.

“Starting at The Feathers has meant a much better work/life balance, and that is very important to me. It means I can have a family life as well as a career.” 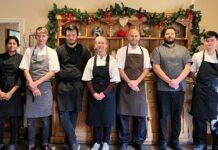 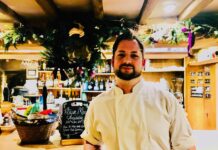 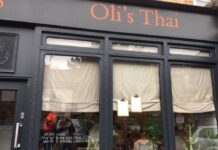