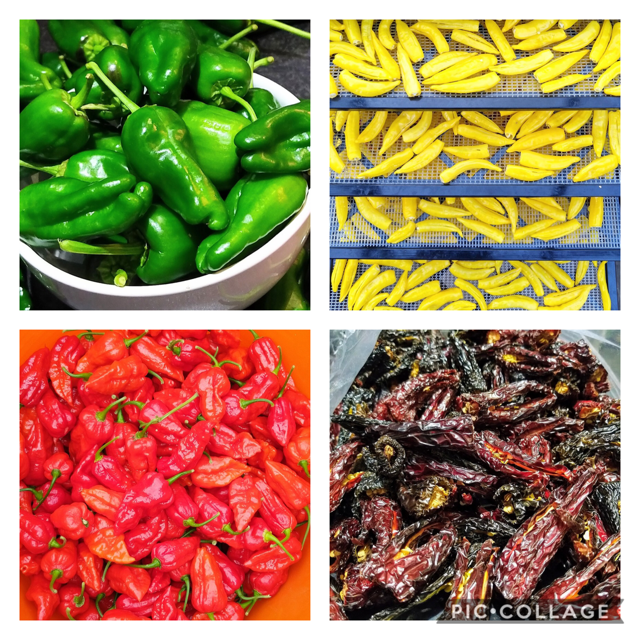 Just over two years ago, Rawdon Wyatt took over a nursery near Witney and began growing chillies.

The Oxfordshire Chilli Garden now provides about 15 varieties of chilli, from mild to excruciatingly hot, to food producers and independent food shops, in and around Oxfordshire.

The hottest chilli is the naga, which weighs in at about one million Scoville Heat Units (that’s about 200 – 250 times hotter than Tabasco sauce).

“Our greenhouse has been adapted to attract and encourage pollinators to visit, along with birds, hedgehogs and other fauna which are beneficial for our operation”

“And yes, you can build up a heat tolerance by eating hot chillies. Mine was developed in the Far East, when I ate lots of spicy food. But for most people, it’s a case of how hot they like their food to be! Everyone’s heat tolerance varies.

“Chillies can also be addictive because of the natural high you get after eating a hot one – a result of your body releasing endorphins to counter the ‘pain’ from the chilli.

Rawdon, who lives in Eynsham, bases the business at the nursery near Witney with a smaller research and development unit in Cassington. “We’re an environmentally-sustainable operation: we don’t use artificial heat or lighting, and we don’t use pesticides or insecticides (relying instead on biological pest control – ladybirds, lacewings, etc.).

“Our greenhouse has been adapted to attract and encourage pollinators to visit, along with birds, hedgehogs and other fauna which are beneficial for our operation,” he adds.

“We have about 450 plants. Depending on the chilli variety, some plants produce a few dozen pods over the course of the season, while others produce hundreds. As a rough guestimate, I’d say that last year we picked about 100,000 chillies with a total weight of about 200kg.

“WE’RE AN ENVIRONMENTALLY-SUSTAINABLE OPERATION: WE DON’T USE ARTIFICIAL HEAT OR LIGHTING, PESTICIDES OR INSECTICIDES, RELYING INSTEAD ON BIOLOGICAL PEST CONTROL – LADYBIRDS, LACEWINGS, ETC“

“I don’t have any employees, but am helped by my partner Claire and by friends and relatives when things get busy (which is actually most of the time!). The picture of the man holding the chilli-filled trug is one of my ‘volunteers’!

So why grow chillies? “I’ve liked spicy food ever since I used to live in Singapore – where everything seems to have a bit of heat in it,” Rawdon explains, “and started growing chillies as a hobby when I returned to the UK.”

“At about that time, people in the UK were becoming more enamoured of spicy food, especially younger people, many of whom had developed a taste for it on their travels.

“People were also becoming aware that chillies weren’t just about heat, but also about taste, as every chilli has its own distinctive flavour. In brief, there was a growing UK market for chillies and spicy food,” Rawdon explains.

With this potential market in mind, he eventually decided to have a go at growing chillies on a larger scale, with an eye to developing a small business. It also meant that he could take a break from his day job as an educational author.

Finding an abandoned nursery near Witney, he began growing specialising in growing hot chillies and sweet peppers (among other things) and things took off from there. And that’s the Oxfordshire Chilli Garden in a nutshell, I guess!

So how can we get hold of his products? “Our dried chillies are currently being sold in the following places: Chadlington Quality Foods, Charlbury Deli and Cafe, Cotswold Cheese Co in Burford, Millets Farm Shop, Eagles Fine Food in Deddington, Added Ingredients in Frilford, near Abingdon, 2 North Parade in Oxford, The Organic Deli and Cafe in Oxford, Fillet & Bone in Chipping Campden, Golsby’s Family Butchers in Eynsham and Patrick Strainge Butchers in Bampton.

“As for using our chillies in their products: the SaltPig Curing Company, the Curiosities Company Ltd, Pot of What, Stainswick Farm Oils, Mr Tack’s, Ross & Ross Foods and the Salsa King all do, and we have a few more in the pipeline, but this very much depends on this pandemic.”

Ah yes the pandemic. Presumably it’s had a massive effect on business?

“It’s had an impact on sales. Fewer people have been out shopping, so there’s less demand on the retail side of things. Plus, some of our food producers sell to pubs and restaurants, so their demand has gone down, which in turn means less demand from them for my produce.

“It’s also become more difficult to get essential things for the nursery (compost, pots, biological pest control, etc.), which has slowed things down on the growing side of things.

“The next few months could be challenging but we are hopeful. These times will pass, as people say, and food producers and food businesses, have been so resilient, resourceful and innovative, that we are reasonably optimistic about the future,” Rawdon concludes.

To support The Oxfordshire Chilli Garden go to https://oxfordshirechilligarden.co.uk