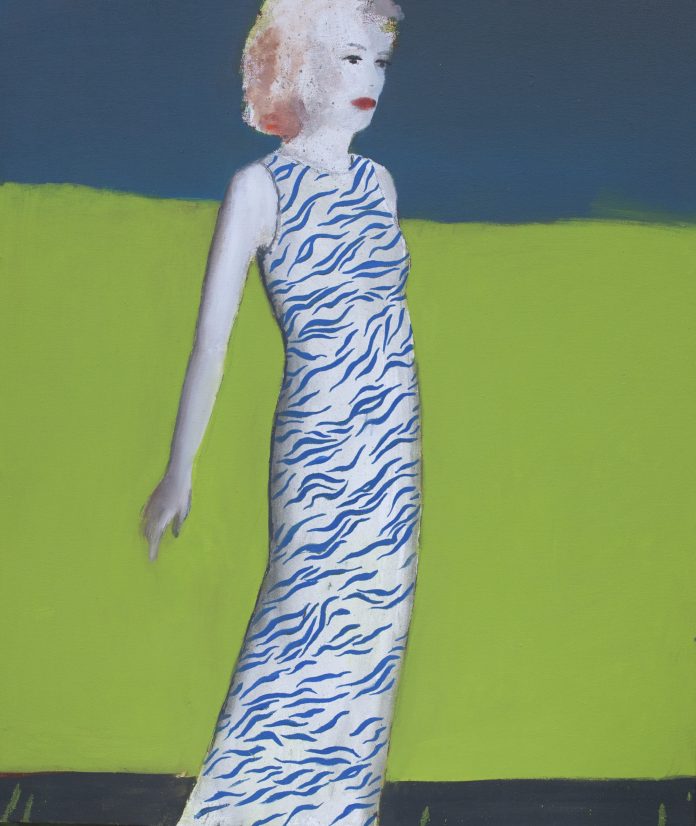 Robin Stewart’s fascination with the language of paint began at a young age, when he was given his first set of paints.

“I must have been no more than three years old, but I can still see the circles of colours inside the tin box, and I remember using the bristle brush that came with the paints and holding the paper so that the colours ran down in lines, mixing as they went. From that moment, I realised that painting was going to be at the centre of my life,” he remembers.

Robin studied at the Belfast College of Art and then won the Boise Scholarship at The Slade, where he studied for a year, followed by a further year at the Camberwell College of Art.

On September 6-19, the North Wall Gallery in Oxford is hosting an exhibition of Robin’s art entitled The Inner Life.  With oil paintings, drawings and collages. It will show Robin’s great diversity and the strength of his distinctive voice in each genre.

In his oil paintings, Robin uses movement with colour and structure to depict the figure caught, as it were, in the act of living.

He seeks to convey the emotions of the subject below the surface, the uncertainties and awkwardnesses of being human. Sometimes these emotions take on a visual form – the frenzied movement, for example, of a nude’s legs.

The colours of Robin’s oils are arresting: “I used to think of colours simply as tones, but with the development of my colour awareness, I came to realise – and work with – the emotional value each colour has,” he says.

The backgrounds of the portraits and nudes contribute to the drama and emotional effect with their bold colours, unusual forms, and patterning, which sometimes brings to mind Matisse.

“I enjoy Matisse’s use of colour and the directness of Hockney’s early drawing, and sometimes reference these in my own work. But while I see myself as within the European tradition, I don’t want to repeat anything,” he adds.

Nudes, in particular of the female form, also play an important part in Robin’s output, both realistic and semi-abstract.

The creation of a nude in oil usually begins with sessions with a life model in which Robin draws pictures that provide ideas for the oil painting he later works on alone in his studio.

It is important to Robin that the models he works with are also interested and engaged in the creative process for the sessions to provide inspiration.

Robin’s drawings often use only a few undulating lines to capture the essence of a figure or object. The lucidity and grace of his drawings, in contrast with the greater drama and turmoil in many of the oils, have a mood of calm and serenity.

In Robin’s studies of plants, there are parallels with the human form and human emotions. His drawing of an artichoke leaf, for example, seems to bristle with anger or aggression.

A distinctive aspect of Robin’s work is his collages. He describes them as being like sculptures which remain in a state of flux until all the elements are exactly where they need to be. The materials for his collages come from papers he has painted himself as well as fragments cut from magazines. It is in his collages in particular where Robin’s whimsy comes into play.

Rarely a day goes by where Robin doesn’t spend some time painting or drawing, or at least looking at the world around him and thinking about his next artistic project.

He views his work as an artist as an ongoing exploration and enrichment of his personal artistic language, in search of the means of creating the images which truly reflect his perceptions about the world or himself. Also of great importance to him is regular physical involvement with paint, paper and canvas, a connection with something deeply primeval.

“Each day I look for some new revelation which will add to my painting vocabulary. Some days are better than others; not all projects work,” he smiles.

“Some seem doomed to failure however hard I struggle. It seems art simply reflects the uneven path of life: some things work, some things don’t.

“So a new project usually begins its life as a half-understood idea, and the process of painting is simply a way of making visible the journey towards some sort of resolution.

“A good day is one where I produce something I could not have anticipated, as though witnessing the work of someone else’s hand.”