Home Eat The story of Pizza Pronto and the quest to bring the best...
Facebook
Twitter
WhatsApp 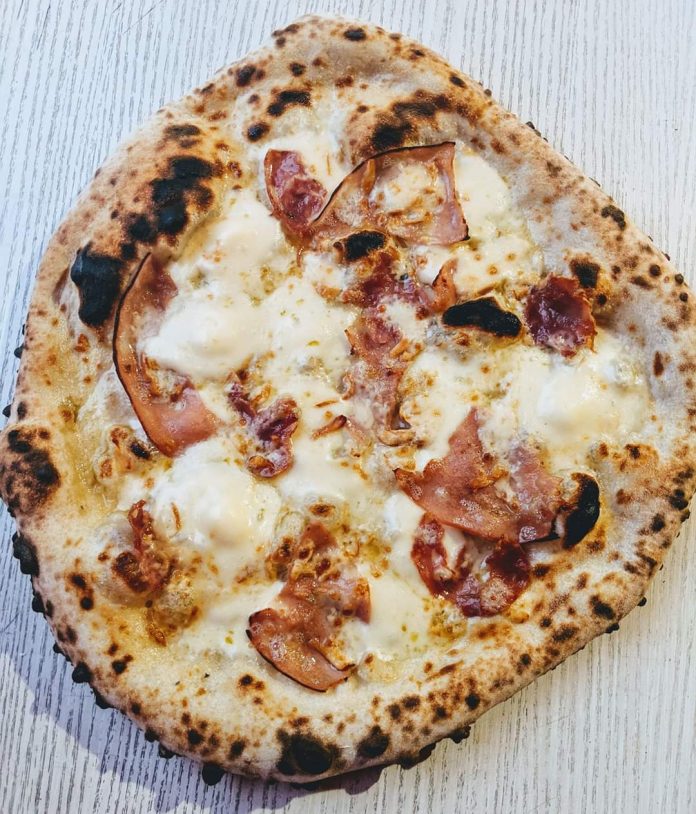 The story of Pizza Pronto goes way back to when Calum Bourne, pizza lover and chef, was walking through London and came across a tiny pizzeria. It could seat about 20 people, only had six pizzas on the menu, which cost half the price of “normal” pizzas, and a big tiled oven sat right in the middle of the restaurant.

“The atmosphere was super relaxed. I grabbed a seat, ordered a pizza and watched the theatre of the kitchen come alive,” Calum remembers.

I quickly began to realize that for the Italians, making pizza was a sacred art

“I watched as the chefs carefully handled the dough, slapped the bases into a wonky round shape, swirled the bright, red tomato sauce on, adding an array of green, red, pink and purple toppings, pulled on to a wooden paddle, then boom, thrown inside an oven, to the flames.

“The dough instantly beginning to rise, the crust turned brown and swelled like a balloon. In with the paddle again, a metal one this time, slicing under the dough spinning a new side of the crust to the flames.

“In less than 90 seconds it was done, on a plate, sliced into four in front of me. A piping hot, fresh, beautiful, Neapolitan pizza. The crust had all these strange spots on it, the mozzarella was bright white and gooey. and I’ve never seen a pizza look so good. I was in awe!

“I knew then what I had known when I was 17, I was going to cook good pizzas and sell them,” Calum Bourne tells me.

And boy has he followed up on his promise, dedicating his life, with a sacrificial zeal, to producing even better pizzas himself, and bringing them to Oxfordshire.

What followed was years of hard graft, research, hard knocks and an ambitious goal to achieve the holy grail of pizza making.

Calum gave up his job and dedicated himself to learning how to make the best Neapolitan pizzas in London’s artisan Italian restaurants to hone his craft.

“Over a few months I worked really hard to get as much knowledge as I could for making authentic pizzas,” he adds.

“I quickly began to realise that for the Italians, making pizza was a sacred art and because it was sacred they weren’t going to hand over the knowledge to me anytime soon, in fact even in Naples young aspiring pizzaiolos aren’t allowed to touch a pizza until they have been rolling dough balls for at least 4 years!! At least, that’s what I was told.

“But six months in and my best efforts began to pay off. I was well on my way.

A few months later and Calum was asked to manage his boss’ six street food sites across London, as well as first time fatherhood.

“It was all hands on deck. I would travel everywhere by bike, I was a new dad running on zero sleep, just sheer will, I was totally exhausted. HAHAHA!! I must really, really, like pizza,” he laughs.

Then in 2018 Calum and his wife decided to move out of London, which was our gain.

“There’s something very special about growing up in the countryside that you can’t get in London. I felt more than ready to give things a go myself, so we moved back home to Bodicote,” Calum explains.

So here he is back in his home town and ready to build his own pizza empire. So what does the future hold? “I want to grow the business and make Pizza Pronto accessible in all towns across the region. I think it’s really important that everyone has a chance to be exposed to great tasting food without having to pay extortionate prices for it.

“For me Pizza Pronto ticks a lot of boxes; it’s fairly priced, it’s a healthier alternative to your standard high street pizza, all the ingredients are premium and of high quality and it’s easily accessible.”

As the business grows he will be be extending the menu to keep the masses happy. Gluten free bases, vegan options, dips, milkshakes, desserts, chicken wings, focaccia sandwiches, salads and more.

In the meantime, stay tuned, order in or get down to Bodicote!! Exciting times ahead.

REVIEW: “This is the real deal” How the White House in Bladon’s food has been transformed by head chef Ben Bullen

There’s a new tapas place in town, and it’s unlike anywhere else. Welcome to El Rincón and its unique and delicious take on Spanish...

REVIEW: Skull Crusher or Bone Marrow cocktails anyone? Why you should visit The Ivy over Halloween