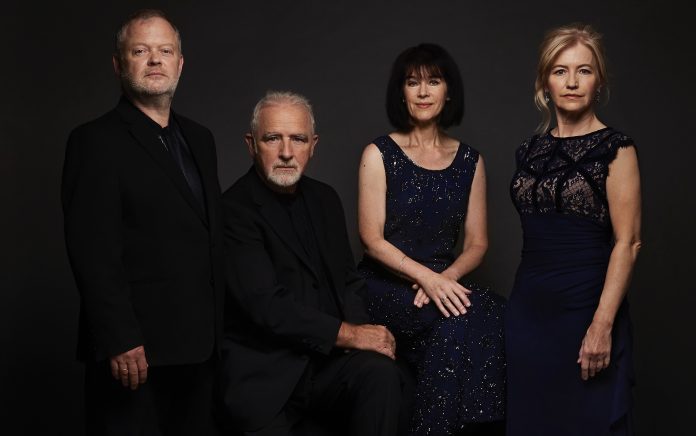 THE PERILS OF LOVE AND ARROGANCE

Opera Anywhere returns to the Thame Arts and Literature Festival with favourite arias and ensembles from operas by Mozart, Handel, Saint-Saëns, Bizet, Puccini and Jonathan Dove. Expect a lively evening of fun and glorious music, in true Opera Anywhere style. Oh, and there’s Prosecco, too. What’s not to love?!

Pianist Jonathan Powell returns to the JDP for a series of three concerts that pay homage to masters of the Russian repertoire. In this first concert he focuses on the early 20thcentury, with Scriabin’s Piano Sonata No.10 and Rachmaninoff’s Piano Sonata No.2 performed alongside works from the same period by Stanchinsky, Conus, Blumenfeld and Catoire.

FAIRY TALES: FROM STANFORD TO SONDHEIM

Be prepared for a thrilling, spine-tingling journey that includes Stanford’s setting of Keats’ La Belle Dame sans Merci, Rebecca Clarke’s setting of Masefield’s The Seal Man, songs by Samuel Barber, excerpts from Steven Sondheim’s Into the Woods, and a new work by American composer Juliana Hall and librettist Caitlin Vincent.

Acclaimed choral ensemble The Sixteen makes a welcome return to Oxford as part of its latest Choral Pilgrimage tour. This year’s programme marks the group’s 40thanniversary with a selection of music by composers who have been part of their choral journey. A new commission by Sir James MacMillan, O virgo prudentissima, is performed alongside works by Tavener, Sheppard, Wylkynson, Fayrfax, Gabriel Jackson and Eric Whitacre. The Sixteen’s founder Harry Christophers conducts. Look out for The Sixteen in Oxford again in December with their special Christmas programme.

Mark Jordan conducts two glorious masterworks of the 20thcentury choral repertoire: Britten’s Rejoice in the Lamband Howells’ Requiem, which was written in 1935 but not performed until 1980. Also included in the concert are Britten’s Festival Te Deum, written for St Mark’s Church in Swindon, Howells’ famous Magnificat Collegium Regale,and two pieces by John Rutter, Cantate Dominoand Hymn to the Creator of Light, written for the dedication of the Howells Memorial  Window at Gloucester Cathedral.

Actor Bruce Alexander (Midsomer Murders, A Touch of Frost, RSC) is the special guest at this concert, in which the audience will be taken on a choral expedition with music by Brahms, Vaughan Williams, John Rutter and Bob Chilcott. Also included is the world premiere of the winning entry in the choir’s recent 20thanniversary choral composition competition. The setting of W.B. Yeats’ The Everlasting Voices by Alison Willis was chosen from 62 entries, and was praised by the judges for its “enjoyable and well written vocal lines, evocative piano part, thoughtful response to the poem and clear structure”. Duncan Aspden conducts.

Baritone Roderick Williams begins his festival residency with one of Schubert’s popular song cycles, Die schöne Müllerin (The Fair Maid of the Mill), in Jeremy Sams’ English translation. Also included in this concert is the world premiere of The Tuning, a setting of Michael Donaghy’s poetry by Scottish composer Martin Suckling, sung by mezzo-soprano Marta Fontanals-Simmons. You can catch Roderick again the next morning at the Ashmolean Museum in conversation with Philip Bullock, followed by performances of Winterreise (The Winter Journey) on Monday and Schwanengesang (Swan Song) on Wednesday, both again sung in English.

Earlier this year, tenor Daniel Norman launched his On Wenlock Edge project, in which Vaughan Williams’ setting of the famous A.E. Houseman poem was performed as a live soundtrack to a new animated shadow puppet film by Jeremy Hamway-Bidgood. Now the project gets another airing at the Oxford Lieder Festival – performed, as before, by Daniel with Sholto Kynoch (piano) and the Brodsky Quartet. The evening also includes songs by Purcell and Finzi.

A NIGHT AT THE MUSEUM

Another very special evening at the Oxford Lieder Festival, in which audiences are taken on a mythology-themed journey in different locations within the Ashmolean Museum. Benjamin Appl (baritone) and Graham Johnson (piano) explore songs of classical mythology amongst the Greco-Roman statues in the Randolph Sculpture Gallery, while Rowan Pierce (soprano) and Nathaniel Mander (harpsichord) perform mythology-inspired songs by Purcell in the Mallett Gallery. There is also a talk, ‘Ancient Myths Now and in the Future’, in the rooftop restaurant by television presenter Michael Scott.