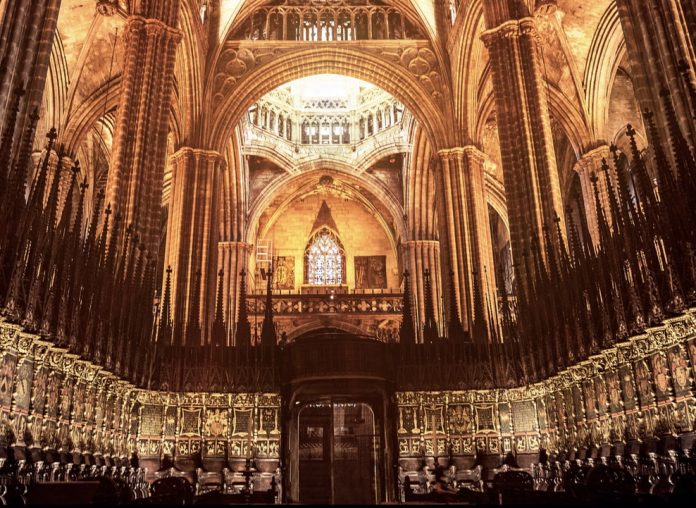 Keble College’s annual celebration of early music is back. Started in 2014 by former Keble organ scholar James Hardie, it brings together world-class musicians to perform in the college’s exquisite 19th century chapel.

At the heart of the festival is the Choir of Keble College. This year, as always, the choir will sing Compline by Candlelight on the Thursday evening before bringing the festival to a grand finale on Saturday with Bach’s momentous St John Passion, accompanied by the Academy of Ancient Music.

This year’s festival is also the perfect opportunity for the choir to unveil its latest recording.

Last year, the choir joined forces with the Academy of Ancient Music to produce the world premiere recording of Francisco Valls’ Missa Regalis (‘Royal Mass’), written in 1740 in memory of King John V of Portugal.

The recording breathes new life into a mass that has been gathering dust for nearly 300 years.

“It’s certainly never been recorded before, and probably not performed since the 1740s,” says Matthew Martin, Keble’s Director of Music.

“It’s an interesting piece because Valls was a contentious figure. He got himself into trouble because he broke all sorts of established musical conventions and people got rather cross with him about it!

“It’s quite a fascinating mix of older styles and newer, more baroque styles all in one mass. It’s very accessible and rather odd at the same time. It’s an interesting piece to do.”

The mass was rediscovered during the 1980s by musicologist, lecturer and broadcaster Dr Simon Heighes, who managed to track down the original score in a library in Barcelona. Keen to introduce the music to the wider public, he approached Matthew and the wheels were set in motion.

So, how much of a challenge was it to rehearse and record the mass?

“It was really good fun to do something that hasn’t been done before,” says Matthew. “It’s quite exposed in a way because it’s not got an orchestral accompaniment – it’s just two bass instruments plus organ continuo.

“When I was looking through it I found it quite difficult to see past elements of the score that were not conventional for the time, but when we put it all together it leapt off the page in an amazing way and in a way none of us were really expecting it to. The choir really enjoyed doing it.”

The mass consists of a Kyrie, Gloria, Credo, Sanctus and Agnus Dei, which on the recording have been interspersed with solo organ pieces by early 17th century Spanish composers Francisco Correa de Arouxo and Juan Bautista José Cabanilles. These solos are performed by Matthew, while Edward Higginbottom provides the organ continuo alongside Joseph Crouch (bass violin) and Inga Klaucke (dulcian – a Renaissance woodwind instrument).

“We recorded the solo pieces at St John’s and we’ve superimposed the Keble Chapel acoustic on that,” explains Matthew.

“The organ at St John’s is a much older instrument, so the Spanish music of that early period sounds pretty well on it in a way that wouldn’t quite work on the Keble organ because it’s much more modern.”

“The discs will be arriving in time for the Keble festival, so it will be interesting to see what people make of it.”

Opening the festival this year is the Gabrieli Consort with Music for Ash Wednesday, which includes Allegri’s Miserere and Sheppard’s Media Vita.

James O’Donnell, Organist and Master of the Choristers at Westminster Abbey, gives an organ recital on Thursday evening, followed on Friday by the first ever complete performance of His Majesty’s Sagbutts and Cornetts in ‘At His Majesty’s Pleasure’, a programme of new music for early instruments.

Composed and conducted by Professor Martyn Harry, the suite of 21 movements is scored for 4 cornetts, 4 sagbutts, harpsichord and organ. Each movement tells a story about the Royal Household as it might have been 500 years ago on the ascendance to the throne by a young child.

At His Majesty’s Pleasure is the first ever commission from a living composer for His Majestys Sagbutts and Cornetts. Established in 1982, founder member Jeremy West declares that playing this full-length work is “the most exciting single project that His Majestys has undertaken”.

There is also a lunchtime concert with student-led historical performance ensemble The Bate Players, a workshop on Gabrieli’s polychoral music led by Benjamin Nicholas, director of music at Merton College, and a baroque string workshop for schools with Oxybaroxy (Oxfordshire Youth Baroque Strings), led by Oxford’s professional baroque orchestra Instruments of Time and Truth.