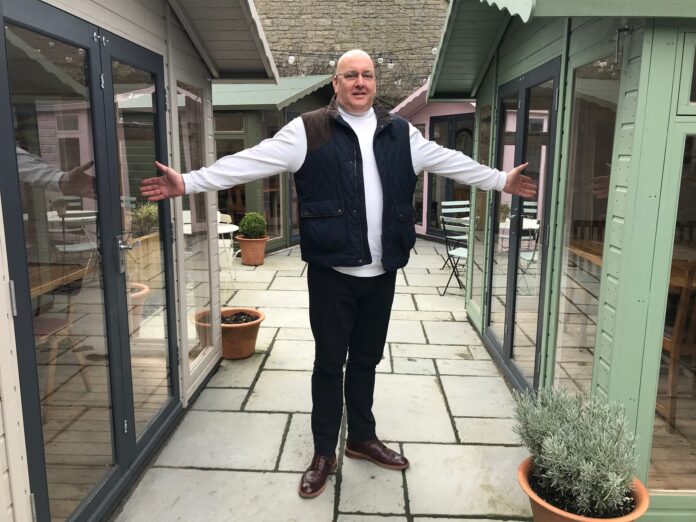 Simon Bradley, is one of our favourite chefs and his food speaks for itself wherever he lays his chefs hat.

From gaining The Randolph’s 3 AA Rosettes back in 2015 to overseeing Eynsham Hall’s revamp in 2016, he has worked at Raymond Blanc’s Le Manoir, John Burton’s L’Ortolan, The Atlantic Bar and Grill, Oliver Peyton’s Coast…. the prestigious list goes on and on.

He was also head chef at Odette’s when a young chef called Tom Kerridge joined as chef de partie working his way up to sous chef within 18 months.

So news that he has taken on the top job at The Hollybush in Witney fills us with joy. That the famous foodie pub is bringing in such a brilliant chef can only mean one thing – that it is refocusing its efforts in the kitchen, and Simon is just the man for the job.

The Hollybush is run by Luke Champion and Alex Vaughan, who recently transformed the pub garden with a series of outdoor eating houses. READ ABOUT IT HERE: https://www.oxinabox.co.uk/review-why-you-must-hotfoot-it-down-to-the-hollybush-in-witney-to-try-out-their-new-garden-room-dining-pods/

“Our game plan hasn’t been a reaction to Covid. We had already planned the outdoor dining houses on the terrace to replace the DJ decks and pub garden, so that was already future proofed,” Luke tells me.

“to find Simon has been a massive relief. Put it this way we are singing from the same hymn sheet”

Next up on their hotlist was re-establishing the Witney pub as a gourmet hotspot, but having interviewed 20 potential chefs Luke was beginning to despair of ever finding the right one. Cue Simon Bradley who’s CV and ethos blew him away.

“We are really passionate abut cooking and food, so to find Simon has been a massive relief. Put it this way we are singing from the same hymn sheet,” Luke says.

“It was serendipity really because we were both looking for the same thing and have the same ethos. As soon as we started talking about the menus, we aligned very quickly – we have the same food vision which is hugely refreshing.

“YOU’VE GOT TO BE PASSIONATE ABOUT WHAT YOU DO“

So why this renewed concentration on food? “We wanted to fill the pub with people eating, so while you can still come and have a drink, we see The Hollybush as more of a restaurant than a pub.”

“We serve modern British food, so while you can still get fish and chips and burgers we really want to push our capabilities and that’s where Simon comes in,” Luke says.

So where has Simon been? Most recently, executive head chef at De Vere Cotswold Water Park Hotel, he fancied a change and a hands-on move back into the kitchens. ” I re-evaluated. I wanted a change from corporate entertaining.

“I really like what they are doing at The Hollybush. We have the same ethos to make the food the best it can be. But I also love Witney, it’s really beautiful and full of independent shops and restaurants.”

With a fantastic young, enthusiastic and passionate team in the kitchen for Simon to encourage, the new head chef aims to make everything from scratch, from the bread to the ice cream using local produce wherever possible.

“we asked ourselves where we wanted to be in 20 years time, and the answer was running a restaurant”

“We’ve missed people coming in for a drink, or for something to eat and a laugh. It’s so important for the soul to see that around you in a pub, it’s something we cherish so we are really excited about reopening,” Luke confirms.

As for the future, Luke and Alex, who also run the excellent Horseshoes over the road https://www.oxinabox.co.uk/review-to-beef-or-not-to-beef-why-the-roast-at-the-three-horseshoes-in-witney-is-a-must/ are really positive: “You’ve got to stay relevant and we want The Hollybush to have longevity so we sat down and asked where we wanted to be in 20 years time, and the answer was running a restaurant. You’ve got to feel really passionate about what you do.”

To find out more about The Hollybush or to book a table from April 12 go to: https://www.hollybushwitney.com