Home Do Books THE BIG INTERVIEW: Raymond Blanc, his apples and the case of the...
Facebook
Twitter
WhatsApp 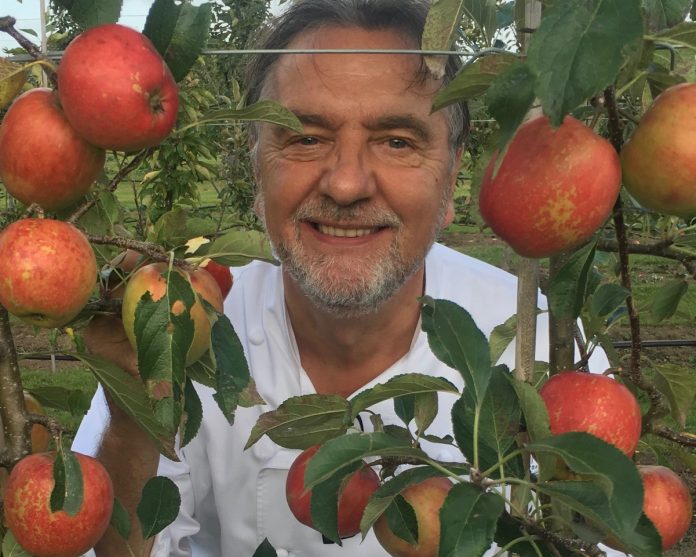 “The first time I tried a Bramley apple I screamed,” Raymond Blanc says, reliving the moment. “My eyes and nose were running…… it was inedible… it was so acidic I felt it in my eyeballs,” he gesticulates in disbelief.

“And as for the Golden Delicious, well it was responsible for the destruction of the British apple industry, not my proudest day as a Frenchman,” the famous chef adds, shaking his head.

We are in his offices at Le Manoir Aux Quat’ Saisons, the home of his two star Michelin restaurant and hotel in Great Milton, where he is discussing his latest book The Lost Orchard, hence the apple chat.

“It was like a still-life painting, because there in the dim light were the outlines of all the food laid out; the potatoes and carrots, the garlic hanging down with the herbs, the apples in rows, the preserves outlined on the shelves, The big barrel of wine”

“I was told in England there is the eating apple and a cooking apple. No, no no,” he says shaking his finger in disbelief. “There are so many varieties in between, and you need them for different things, so it’s about getting to know their individual properties.”

Raymond Blanc should know, putting his money where his mouth is, he has built three new orchards from scratch in the gardens there, which now produce 60 tonnes of fruit for Le Manoir’s kitchens.

They took seven years, cost thousands of pounds and now boast 2,500 trees with 150 varieties of apple.

Why is has taken a Frenchman to highlight the dire loss of so many of our British apples is another matter entirely, but it’s one that RB, as his staff call him fondly, has embraced.

And when Raymond Blanc puts his mind to something, he delivers.

“We need to listen to people like David Attenborough whose message is very clear. He has spent his whole life amongst nature and the earth, and is watching its gradual degradation. He is not a political animal, but he is a moralist so when he tells us we have to change, we have to listen”

The result is not only this extraordinary agricultural undertaking right here in Oxfordshire, but also the resulting book The Lost Orchard, which is being published on Nov 19.

In it he catalogues this creation of the orchards in the grounds of his world famous hotel.

He is as bewildered as anyone that, with such an historic and proud agricultural history, we, as a nation, have let our orchards fall by the way, discarded in favour of cheap, bland, imported supermarket varieties.

“We import 80% of our apples,” he adds before expanding on some harrowing statistics and describing his incredible journey to reverse this trend.

Anyone reading his wonderful book will understand how much this journey has meant to him and how much he has enjoyed it, tinged with a steely determination to highlight the problems and do something about it.

“Plant a tree. Buy one from your garden centre and plant it with your children. Please grow your own tree,” he implores. “You can put it in a pot, you don’t need a big garden”

Because this is about more than just fruit. It is about our responsibility to shop responsibly, to plant and grow our own food, to change the current trend for mass market producers, imports, huge carbon footprints and producing something healthier and better for our planet.

A big task then? “I love tackling the big issues,” he smiles. It’s true, he has been bucking the trend way before everyone else for years, from pesticides, seasonality, using fresh local produce, intensive farming, sustainability, spending more on food, better flavours or quality, he’s always on his soap box long before everyone else.

It has been rewarded though – he is President of the Sustainable Restaurant Association and been awarded an OBE, as much for his for services to the food industry as his immense skills as a chef.

He tells me about how apples are picked and stored too young in South Africa, why they taste so bland, what damage pesticides do, how we need to reconnect with the numerous varieties out there.

So why does he care so much and where does this love of seasonality stem from?

“My childhood,” he says simply. My father grew everything and my mother cooked it.

“We had a terraced garden and really invested in that. It was a predominantly peasant area and until I was 14 that was my playground and we grew everything, so when my mother asked for some potatoes she would ask for the variety, the same with apples, because there were so many to choose from and they all had their different uses.

“And oh the cellar,” he says, his eyes going misty, as he recounts the sights and smells of his family storeroom.

“It was like a still-life painting, because there in the dim light were the outlines of all the food laid out, the potatoes and the carrots, the garlic hanging down with the herbs, the apples in rows, the preserves laid out on the shelves, their outlines. The big barrel of wine kept there.

“Yes my childhood was steeped in food – the food we grew.”

“That’s where I got my hunter-gatherer instinct from. We lived in the forest where there was a micro-climate so it was brilliant for growing.

“So when Maman Blanc asked us to fetch some potatoes, she would request a particular variety for whatever she was cooking, and the same with our apples.

“Which is why I tried and tasted every one of these apples in my book. I cooked them every way I could think of, I juiced them and pupled them and baked them. I made them into tarte tatins and put them in pies. So I know how they work best.”

I don’t doubt it for a second, and a brief look at his new book conforms this – The Lost Orchard being an ode to his childhood, as well as a reflection of what we have lost in this country and what we can do about it.

“Plant a tree. Buy one from your garden centre and plant it with your children. Please grow your own tree,” he implores. “You can put it in a pot, you don’t need a big garden, and the nursery will teach you how to look after it.

“Help Britain regain its identity because I do believe that globalisation is going to take a different direction, and we need to reconnect with our food and our seasons, in terms of food and transport.

“We need to listen to people like David Attenborough whose message is very clear. He has spent his whole life amongst nature and the earth, and is watching its gradual degradation. He’s not a political animal, but he is a moralist so when he tells us we have to change, we have to listen, and yes there is a cost, which means it then becomes a class thing.” Breathe Raymond, breathe.

“We need to teach people to cook again using cheap ingredients, and that’s my next project – it’s going to be so exciting,” and then he stops and collects himself, “but we’ll talk about that next time,” before continuing.

“We have to work with what we have inherited, otherwise we will self destruct and everyone knows it, except Mr Trump, so yes it is worrying, but it’s also exciting.”

As for what’s next, at Le Manoir it’s all about the hens, big fat French hens with grey plumage and an English cockerel. 200 of them, in April. RB is also investing in a Le Manoir vineyard in the UK and a new machine which recycles all the hotel’s waste.

And what of his endless curiosity, will it ever run out? “Never,” he says. “If I lose that I lose everything, and the light would go out of my eyes and I would shrivel up. I will always be curious about everything.

“And yes I’m a Frenchman but for me it’s always been about seasonality. That why Le Manoir is called the Quatre Saisons.”

And with that he returns to his piles of paperwork, his kitchens, his guests, his orchards and the next big project, because one thing is for sure, this Frenchmen will never sit still. It just wouldn’t suit him.

The Lost Orchard by Headline is published on November 19 and priced £25. 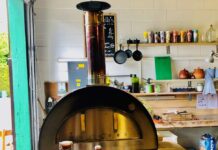