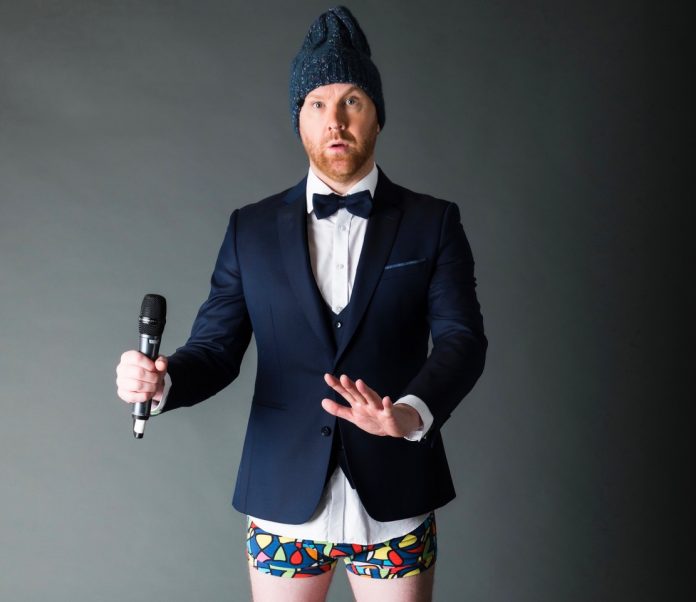 “I love Oxford. It’s properly posh, not nouveau but proper old money, with the kind of people that say ‘I don’t have a bean’ but live in a castle and drink gin and tonic while playing the piano naked.”

I’m talking to Jason Byrne. He is currently in Galway, Ireland taking part in a comedy festival.

It’s almost impossible to get a word in edgeways though because he is constantly being stopped by well-wishers and fans who recognise him and thrust pieces of paper and pens at him for signatures while patting him on the back.

“If you asked Billy Connolly what he did, he’d say stand-up or telling stories. It’s a bit like that.”

He is Irish mind, living in Dublin, so even more well known here than anywhere else.

“Sorry,” he keeps apologising, when I ask him a question, as he tries to extricate himself from another fan.

He’s lovely as well; cheerful, cracking jokes and constantly signing autographs thoroughout our interview, telling you everything you want to know.

“I laugh when I read all those articles about ‘spending more time with your kids’. If I wanted to see my dad I’d have to go to the pub”

Talking to him about his new tour is much harder though. “If you’ve already seen my shows you’ll know what they are like, but it’s hard to explain.

“All I can say is they are different every night,” he shrugs. “I talk about the city I’m in, the audience, tell some funny stories and then see where it goes. It’s quite interactive. I literally don’t know how to explain it any further.

“So someone will come and see me and then tell their friends and they come to see me and that’s how it works. As long as I make them laugh…” he shrugs again.

“If you asked Billy Connolly what he did, he’d say stand-up or telling stories. It’s a bit like that.”

“I could say obersvaetional comedy but I HATE that word, it’s so bland,” he shouts. “But it does mean I just make stuff up as I go along.”

Well known for being surreal, random and unpredictable, his fans relish his red herring style humour.

But at least his latest tour has a theme, Wrecked but Ready, which Jason says is based on the break up of his marriage and everything that involves.

“meditation is as crucial as oxygen for me”

He lives a few minutes from his wife and two sons in Dublin, and says he would never talk about them in a bad way. “My boys are my world,” he says simply. “But it’s like changing a wheel now. I’m in that mode. So I talk about being an overzealous father. I ring them every day and they tell me I never spoke to them this much when they lived with me.”

His sons are with him in Galway, more excited about the gaming conference there than the fact that their father is such an internationally renowned comedian. “They couldn’t care less,” Jason says proudly. “They would never come to a gig. There is zero interest even when I’m on TV.”

“It’s so different though these days isn’t it. I laugh when I read all those articles about ‘spending more time with your kids’. If I wanted to see my dad I’d have to go to the pub,” he laughs.

To combat the constant touring (23 years and counting), the marriage break up and separation from his kids, and the need to appear permanently cheerful on stage, Jason has been vocal about his need for mediation and the more spiritual side of life to combat the negatives.

“I need meditation like I do breathing. It’s amazing,” he says. “Because you need to stay on top of your game. So I don’t drink, that’s a killer when you are on tour, and I do a lot of work on my mental health.

“People expect you to be permanently happy as a comedian so meditation is as crucial as oxygen for me. And it’s easy, 10 minutes here and there, and it means my health is so much better as a result, because I really believe your brain is capable of destroying things in all sorts of ways if you let it,’ he says, batting away another fan.

“Did you see that? he asks incredulously. “I’d love to go to his work, sit on his desk, interrupt him and spill coffee all over the place,” he says.

“Where we we? Oh yes….. why make my stand up so personal? That’s just me. Jimmy Carr is the opposite, he has perfected the art of the one liner which deflects from who he is and there’s nothing wrong with that. But my audience is totally different from his.”

So is Oxford ready? “What for my working-class humour?” he chuckles. “I haven’t been to Oxford for a while actually because it stands out like a sore thumb on my tour schedule – Glasgow, Corby, Belfast, Newcastle…Oxford. I can’t wait.”

Jason Byrne is at Oxford Playhouse on Thursday Oct 31.