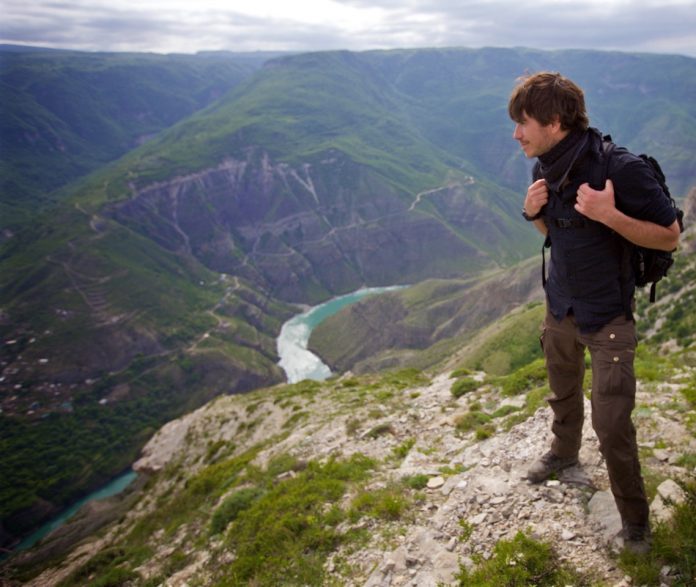 It’s hard to pin down the essence of Simon Reeve because he is such a wonderful mass of contradictions. Having left school with no qualifications, he is now one of our most popular travel presenters, his lust for life and adventure show no sign of abating, yet he is open and honest about his own mental health, his wayward childhood and the fact that he very nearly didn’t make it at all.

“People are not in denial about climate change, whether they are soldiers, farmers or ranchers, they just accept it”

There is a charming, boyish wonder to his TV presenting and yet he’s not afraid to call a spade a spade.

And, despite his fierce work schedule and family commitments, Simon Reeve is lovely to talk to; enthusiastic and candid, rather than cynlical and jaded.

He is unjudgemental in his portrayal of life across the globe, yet indignant about hypocrisy, happy to expose a country’s dark secrets while sympathetic to drug addiction or a cycle of violence.

“When you know there is a different version to the stereotype, that’s when things get interesting, a different reality which is unpalatable, as was the case here with the oil extraction in Canada.”

He’s discussing The Americas. his current BBC double series, as Simon travels from the Arctic to the base of South America, hanging out with drug cartels, indigenous tribes, cowboys, drug addicts and conservationists in his most ambitious project to date.

And while he shows no fear in the face of adversity, Simon cries like a baby about the smaller, human nuances he comes cross on this epic journey.

“I know – I’m a total emotional wreck,” he laughs. “Perhaps I should have hardened up along the way, because I’ve been doing this for 30 years now and been in lots of weird situations – I could have become more emotionally brittle. But I don’t want to be, which means I still get angry, inspired or upset. I want to feel the effects,” he explains.

“We don’t do a recce or talk to the people on film beforehand, so what you see is how things unfold, and that does come with lots of surprises, because we have so many preconceptions.

So what shocked him then? “The number of people living in these remote environments who were aware of the landscape changing around them. People are not in denial about climate change whether they are soldiers, farmers or ranchers, they just accept it.

“And while I don’t confront people, that’s not my style, this series is definitely about projecting our future consequences, because we show the realities – they have the same truth. So I don’t think we take the easy way out.

“What is more complex is getting all of these elements across to the viewers while enabling them to think for themselves and make up their own minds, so I am critical of what I do and say.”

Simon Reeve is is also becoming increasingly popular off screen, thanks to his ‘An Evening With’ style theatre show, now back by popular demand after selling out completely last year.

Coming to The New Theatre on Monday, Simon will be recounting his adventures and talking at length about his own misspent youth.

And it’s obvious he has his own aAchilles heels. There is a poignant moment in The Americas while in a Canadian drug centre, when Simon says to the camera that he could have easily taken a similarly wrong step himself and acknowledged how easy it was ‘to make mistakes’.

“I own up to having a tricky start and a fragile mental health situation when I was younger,” he tells me. “I really sunk and had no confidence. I didn’t know how the audience would react to that at first.

“But I also didn’t want people to assume that I was just another public school boy capitalising on his situation. I wanted to counter and own that and show that with luck and hard work, you can really make something of yourself, wherever ever you are from.

“I’m just trying to be honest and to talk about being fragile – to say its all OK essentially, even if since then I have done some very extreme things.

His is an interesting story, as fascinating as any of his own escapades; Born and bred in Acton West London he was a difficult teenager, flunked school and seemed headed on a path of self destruction. He had depression and considered suicide, had brushes with the law. But having landed a job as a postboy at The Sunday Times, he was soon promoted to investigative reporter, handling large assignments an becoming a terrorist journalist, author and now travel presenter,.

Threatened with violence, guns, malaria-ridden, scared or lost, Simon Reeve has survived, and comes back for more every time.

“yes, this journey is more personal. I’m getting old and I don’t know how much longer they will let me hare around the world. But there is a responsibility in that. I have had the fortune to visit so much of planet earth and how I impart that knowledge is important.”

The Americas was no different: Take the drug wars in Mexico, Simon visited accompanied by Mexican Special Forces because danger-wise it’s on a parr with The Yemen and Libya.

Or El Salvador with its sky high murder rate when Simon went out on a Saturday night with paramedics into the gangland and discovered that his two ambulancemen were 18 and 14.

“I knew there would be strong stories and big characters, but it was a shock how many crazy situations there were,” he acknowledges.

“And in the case of The Americas, I have been surprised by how extreme it actually is, from the cold of the far north to the heat of California, but also the poverty and the environmental issues.”

So does he relate to the war correspondents chasing conflict around the world to get their highs? “I certainly need my buttons tweaked and to have experiences that make my emotions race in some way or another. I want to feel alive while being in a situation that’s interesting and surprising. That doesn’t necessarily mean it needs to be dangerous or adrenaline fuelled, just bloody interesting. My job is to then make sense of it and decide how the stories need to be told. It’s a privilege to do so either way.”

“So yes, this journey is more personal. I’m getting old and I don’t know how much longer they will let me hare around the world. But there is a responsibility in that. I have had the fortune to visit so much of planet earth and how I impart that knowledge is important.”

But the success of his theatre tour is what has taken his breath away: “The tour selling out totally astounded me, so I never take it for granted and try to put my all into it.

“Put it this way, I don’t just get up there and show people a few slides and then get picked up in a limo,” he laughs

“And yes people do tend to want to know the same things – what did I eat, where do I go to the toilet, when I was most scared, but to get out there and meet the people watching my programmes and hear what they think is absolutely amazing.

“Because TV does put people on a pedestal and the theatre show is a way of redressing that balance and showing people the reality.”

With series one underway, series two about to begin filming and a theatre tour to embark on, its hard work all the same? “Honest to God there are a million tougher jobs. I live a totally charmed existence. I couldn’t ask for more,” he says.

But what of his life in Dartmoor with his wife and son? “I try to find a balance between my work and my family. I play a lot of football with my son when I get home.

“But it’s the life I lead and the job I do and it keeps me sane. I get itchy feet after a while and can’t sit still so it suits me, and my family understand that.”

An Evening With Simon Reeve is at Oxford’s New Theatre on Monday.