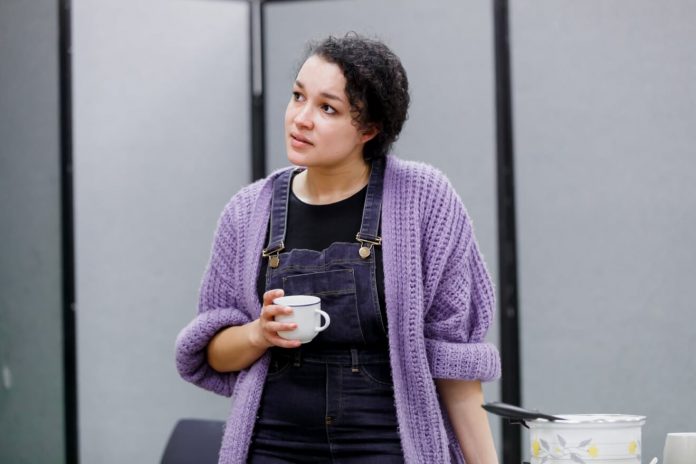 Audiences can expect two hours of intense, witty, caustic, passionate drama and cooking, according to ElevenOne’s director Helen Taylor, who brings Skylight to the OFS next week.

“As the characters verbally spar with one another, they throw back and forth lines dripping with emotion, humour, sarcasm and even, sometimes, love,” she continues, while audiences are treated to the aroma of live cookery during the show.

She is discussing Skylight, written by David Hare, first performed in 1995, and featuring just three actors.

Its action takes place in one room over the course of a night, as Tom (Mike Taylor) arrives at the door of his ex-lover Kyra (Charlie Morgan) following the death of his wife, wanting to rekindle their relationship. Sparks inevitably fly.

So how does the cooking manifest itself? “As Kyra and Tom rehash the past and consider their future, Kyra is busy cooking dinner,” Helen explains.

So important a premise was the cooking, that it was even included in the auditions: “Basic cooking skills were a factor in the audition process,” Helen smiles. “Actresses were confronted with a chopping board, knife, and a pile of onions. They had to chop while reading the lines!” before adding “It’s a delicious sauce by the way. We’ve put the recipe in the programme!”

ElevenOne Theatre is known for bringing entertaining, thought-provoking, contemporary plays to Oxford, including Copenhagen, After Miss Julie, and Blackbird. And Skylight is no different.

Tom and Kyra had a passionate, explosive affair some years ago, which Tom is hoping to rekindle following the death of his wife. He is an older, wealthy, successful restaurateur; she is a principled school teacher in a deprived part of London.

So why pick this specific play? “Skylight was an attempt by renowned ‘lefty’ and social commentator Sir David Hare to write from the point of view of a businessman for the first time,” Helen says.

“He created the character of Tom in the mould of a Thatcherite entrepreneur who has made his money with a string of restaurants and hotels through the 80s and may now be struggling to deal with 90s society shifting to a more caring, inclusive outlook.”

“It means that the cast have got very close to their characters and see certain aspects of themselves in the characters’ foibles, struggles and limitations, as well as adding their own individuality to Hare’s characters.”

How does Helen hope the audience will react? “The audience get a ringside seat as the cast tease, reminisce and fight – all while Kyra cooks them spaghetti for their dinner live on stage! Truly a sensory overload.

“So I hope they feel transported to that cold, threadbare kitchen and into the midst of the fiery, life-changing relationships unfolding in front of them.”

A good play to see over Valentines then? “A standard romantic comedy this is not,” Helen promises.