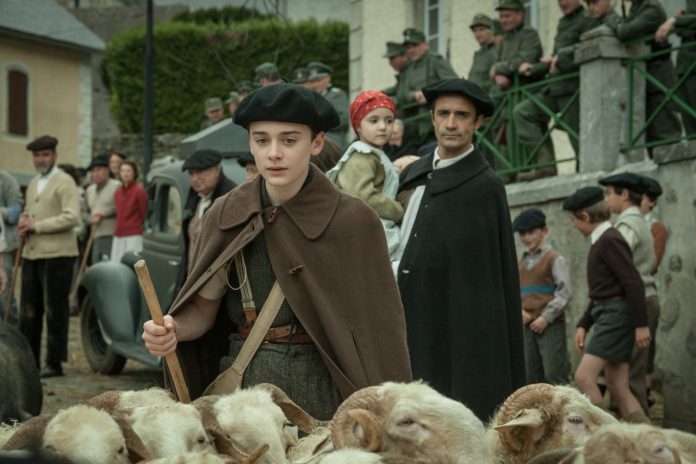 When Noah Schnapp was cast as 13 year-old French shepherd boy Jo Lalande in the new Michael Morpurgo film Waiting for Anya, the film producers already knew he was a big star.

With Netflix’s Stranger Things and movies such as Bridge Of Spies, and Charlie Brown under his belt, his reputation already preceded him.

But it wasn’t until Noah streamed a clip of the new film on his Instagram account, which was then watched almost 2.5 million times in just a few hours, that they realised the extent of Noah’s fanbase.

This is an added bonus now that the film has wrapped and the promotion for Waiting For Anya’s February 14 release has begun, with Oxford hosting the young star at a screening and Q&A session. (Full interview with Noah to follow at oxinabox.co.uk)

Yes, fans of Noah will be able to watch the film and ask him questions right here in Oxford.

Now 15, Noah features in the first Michael Morpurgo book brought to the screen since War Horse, and thanks to its stellar cast, which includes Oscar winner Angelica Houston and Jean Reno (Leon, The Big Blue, Ronin), there is a real buzz around it already.

Waiting For Anya recounts the story of a 13 year-old shepherd boy who guided Jewish children over the Pyrenees mountains from France to Spain, to escape from the Nazis, during WW2.

Exec producer Victor Glynn, who lives in Summertown and works in the film industry as a writer, director, and in this instance exec producer, had no idea how famous Noah was until the young actor arrived in the French Pyrenees.

“The security was quite something,” he says, “because lots of French girls had heard Noah was filming there and flocked to see him. On top of that filming was a real challenge. There were lots of blizzards and bad weather because we were in the mountains, but the special effects are something else.”

Noah Schnapp comes from a New York Jewish family, which ties the actor to the part even further.

Based on a true story, Michael Morpurgo stumbled across the tale when walking in the Pyrenees several years ago. He was recognised by a young girl who thrust a copy of Cheval De Guerre (War Horse in French) into his hand for signing.

Her grandfather was the Mayor of Lescun and wanted to meet Michael to tell the famous children’s author the story of the shepherd boy, who had lived in their very village during the days of German occupied France.

“Michael thought ‘well that’s a good story’, and that’s how the book came to be written,” Victor explains.

“As for the film,” Victor continues, “how it came about is another unbelievable story concerning a boy called Toby Torlesse who didn’t like reading.

“His parents took him to see War Horse aged 12 at the National Theatre and he was mesmerised by it. So he went to a bookshop and bought all of Michael Morpurgo’s books and read them one by one.

“Toby then wrote to Michael asking if he could write the screen play to Waiting For Anya,” Victor tells me. “Michael, believing that all children should be encouraged, said yes and thought nothing more of it.”

“A year later Michael opened his post to find the screenplay sent to him as promised by Toby which turned out to be rather good,” he chuckles.

Toby’s dad Adam Latham took it upon himself to raise the money needed to make this film and raised the $10 million required: “and that’s how the film came about, all thanks to the screenplay of this inspired teenager,” Victor adds, whose son Finn is the producer.

So what can we expect from Waiting For Anya? “It’s a gentle, charming, emotional, touching, redemptive story of hope and it’s very moving thanks to the brave young boy Jo Lalande that Noah plays.

“It’s a very heroic story about a teenager’s strength and determination, so we are quietly confident of its success,” Victor tells me.

Former Children’s Laureate Sir Michael Morpurgo, said: “I saw my story of Waiting for Anya in my mind’s eye as I was writing it. Now all these years later, I have seen it on the screen. What a film they have made! Astonishingly beautiful and moving, it is a tribute to all those who have made it, who have given my story new life, and to Kaleidoscope who will be bringing it to so many.”

Victor’s next film is called The Belle, a comic caper about locals on the Isle of Wight sneaking over to France to steal back the church bell apprehended by French pirates in 1544.

In the meantime, with Waiting For Anya to get off the ground, he’s got a lot on his plate.

“Everyone who has seen it so far adores it. I’ve got a good feeling about this one.”

The film screening of Waiting for Anya will be held in Oxford on Feb 14. Further screenings are being held in London and York. The film will also open in the US and Australia.

Premiere details to follow and full interview with Noah Schnapp at oxinabox.co.uk