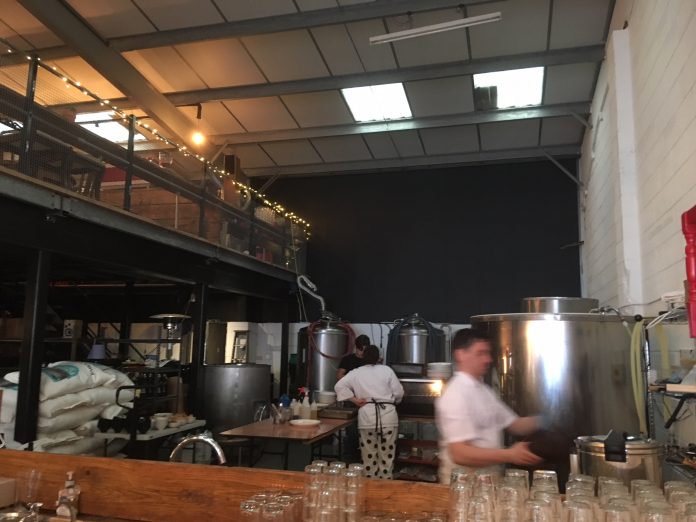 When the White House on Abingdon Road reopens it will be utterly transformed. Expect a retro, shabby chic, family-friendly, accessible sort of vibe and some fantastic food.

It all comes courtesy of Tap Social who opened up their giant brewery/bar/pop up restaurant/event space on the Botley Industrial Estate, as a social enterprise, three years ago, staffed by prisoners from Springhill Prison (between Bicester and Aylesbury).

“You don’t get the opportunity to open a pub everyday”

After great success there, the Tap Social team is now keen to expand their repertoire and include somewhere people can gather and eat, a pub or cafe, and having looked for the right location for years, have taken on The White House, aiming to open early next year.

“The White House is exciting and new at the same time. we are proud and confident of what we are taking on.  It’s something Oxford didn’t have before and will provide a different experience for people”

“We are just looking to expand the hospitality, and offer more ambitious training, so that our staff don’t just learn about brewing but can expand into the food industry, because we know we can do so much more”, Tess Taylor, Tap’s co-founder and director says.

“The White House is an amazing building in a residential area, and close to town so it has great potential as a mixed use space on different floors. You don’t get the opportunity to open a pub everyday,” she adds grinning.

“In the three years since we have been running Tap we haven’t had any problems at all, which for us is confirmation that this programme works”

“Obviously we are running on a shoestring, but it will have a Tap Social vibe.

So what can we expect? “There is a lot of work to be done because we want to make it our own with a very similar feel to this place,” she says, gesturing around her at the cosy Botley space where we’re talking, “full of mismatched tables, chairs and crockery and some lovely bargains, set up in a beautiful listed building.

“It will also have a function room for yoga and music alongside the cafe and restaurant.”

So when it came to staffing, Tess knew she needed a real pro to take on the project, and got in touch with her mate Heather O’Conner, who hails from Toronto in Canada.

“We have known each other 12/13 years now and I came over to visit,” Heather told me. “I half joked with Tess that I could come and help her get The White House up and running, and here I am.”

“We need someone very experienced to create an incredible team who is dedicated to the Tap Social ethos, and Hannah is such an important part of that,” Tess adds.

Training is going to be a major part of setting up The White House, many of the staff/prisoners will be reacquainting themselves with the catering industry and getting back into the kitchen.

“There are positions available at every level. Some will come in at the beginning without any skills, while others will have quite extensive experience, providing them with valid, valuable, necessary jobs and skills,” Heather adds.

“Now more than ever there is a massive need for employees in the catering industry, especially in the wake of Brexit, and we have people here ready to go to work,” Heather continues.

“Their sentences are coming to an end and they are being prepared for life on the outside. Having work and prospects makes a massive difference to their chances of not reoffending,” Tess explains.

“It not only gives them work and prospects, but teaches them how to socialise on the outside, things they haven’t done for years.”

The prisoners are released to Tap on a temporary licence after a risk assessment – the same premise will work at The White House.

“We will obviously interview the guys (it’s an all male prison) before we take them,” Heather explains, “but it’s a popular option and seen as a great opportunity. People want to come and work here. The wages they earn are then taxed by the prison.”

“We help all of them and do not differentiate between them. We can’t be prejudiced, They have done their time and paid their dues to society. We done want to punish them again. Its not productive or fair”

“We also work with marginalised groups referred to us by Aspire and Clean Sheet with an ex offending background,” Tess continues. “Some are in hostels or intermediary houses trying to find work. Many stay on afterwards, although others aren’t from the area so it’s harder. Others commute.”

And what of the naysayers who don’t want this sort of social enterprise on their doorstep? “What are the alternatives? What are their chances with no CV, training or employment prospects. That’s so short-sighted,” Tess sighs as if she’s repeated the argument hundreds of times before.

“Essentially you are just delaying the inevitable if you don’t rehabilitate them. It’s short sighted not to support them pre and post release because otherwise the chances of reoffending are sky high.”

“And when you meet some of the guys, they are such a wonderful team of people, both front and back of house. They are just grateful that we have put our faith in them.

“In the three years since we have been running Tap we haven’t had any problems at all, which for us is confirmation that this programme works.”

“Instead working with us increases their confidence. We help all of them and do not differentiate between them. We can’t be prejudiced. They have done their time and paid their dues to society. We done want to punish them again. It’s not productive or fair.

“As for The White House, it’s exciting and new at the same time. And we are proud and confident of what we are taking on. It’s something Oxford didn’t have before and will provide a different experience for people.”

Due to open their doors in spring (the dates have been put back because of building issues) the team are keen to get into The White House and make their stamp.

As for the food – sustainable, affordable and accessible are words all thrown around. “We are already looking for nearby allotments where we can grow our own produce,” Heather tells me.

“We will be open 7 days a week and serve brunch right through to the evening meal and Sunday lunch. We are thinking of ourselves more as a community kitchen serving modern day pub food with good beer – for 60-80 seats downstairs, which we can increase depending on demand as time goes on.

Going forward Heather says: “What motivates me is evolving the White House. And while we have lots of ideas we won’t run before we can walk.

“We are engaging with local or relevant suppliers from Redemption Roasters or New Ground in Oxford to a new enterprising juice company, helping each other to further the ethos.

“Everything is new so I am like a sponge,” she laughs. “But this company’s social enterprise viewpoint makes everything we do more purposeful.”