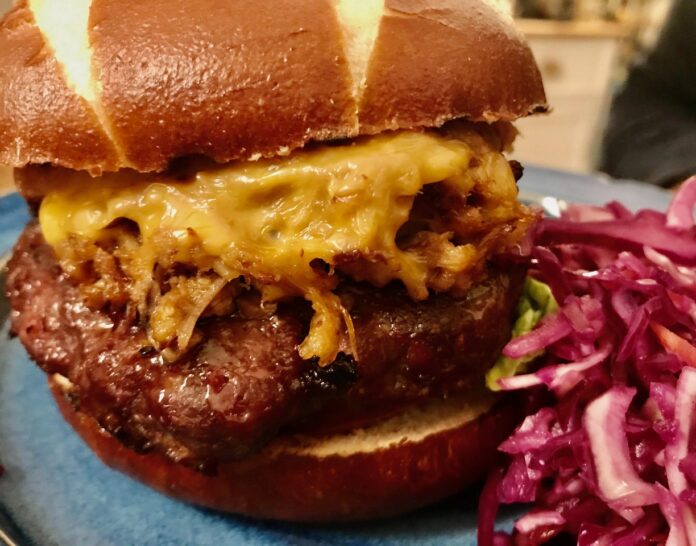 Slipping off to wait in a dark car park outside Woodstock was about as exciting as it gets in lockdown, the illicit rendez-vous perfectly planned and timed.

And yes I was meeting someone to exchange packages at a preordained destination for money.

Sitting in my car in the dark watching the clock reach 6.30pm I headed to The Duke Of Marlborough for my designated assignation.

No disrespect to Rich Gibbs of course, the new general manager at The Duke Of Marlborough, for there he was, ready and waiting as arranged, complete with several bags of goodies for me to take home and devour, on this, the Duke’s inaugural takeaway night.

And while hardly an indecent liaison, it was made even more unique by the fact that the pub hasn’t even opened its doors to the public yet.

Understanding that we are a fickle bunch who need constant variety, Rich and executive chef Mike Wallis decided from the start to change the takeaway menu every week.

Currently only running on Saturday nights, there are plans afoot to introduce breakfast and brunch before April 12, when we can gallop down en masse and take up residence in the huge pub garden permanently.

In the meantime, it’s takeaway or nothing, so we ordered in advance, knowing The Duke would sell out, which it did. Americana was the order of the day, (think dirty fast food), and we really went to town.

For the five of us then: Two Duke burgers, one Mighty Duke, one veggie Jack burger, one New York dog, two side boxes and two cheesecakes.

There was the option of the Billy Big Balls Burger (basically double everything) which we deliberated over, but after over-consuming on a vast scale were pleased to have abstained. Billy must be quite a man.

It’s the attention to detail that’s so touching. The Hershey Bars, the lollipops for the kids, both of which were free. The side boxes came complete with corn bread, sweetcorn and chips, and the puds were Reese’s cheesecakes – a novel touch.

The wonderful chewy, yeasty, dark Pretzel buns almost stole the show, but the generosity of the portions, the well seasoned, huge burgers and the sheer messy joy of their consumption was more than enough

But the main event was certainly the dogs and burgers in all their messy, gloopy glory. Perhaps not first date material, but we waded in. This is a two hand job believe me.

The Duke burger was an 8oz beef patty, gem lettuce, tomato, bacon, cheese, bun and a side of slaw. (£8), the Mighty Duke was the same but with pulled pork £10. The veggies were spoiled with both a dog and a burger on the menu. We tried the jack burger – 2 veggie patties, pulled jerk jackfruit, gem lettuce, tomato, veggie cheese, a Pretzel bun and a side of slaw.(£10)

Any criticisms? The slaw needed either a dressing or mayo, and the chips were a tad cold. but then what takeaway chips aren’t? Other than that it really was a feast of overindulgence. Eating them was the challenge because the burgers slithered all over the place with so many moreish, juicy fillings.

The wonderful chewy, yeasty, dark Pretzel buns almost stole the show, but the generosity of the portions, the well seasoned, huge burgers and the sheer messy joy of their consumption was more than enough to persuade us we were onto a good thing.

The kids demolished the Reese’s Cheesecake and the Hershey’s Cookies n Cream bars while we sat back in awe.

This week’s it’s Mexican – proper tacos – from Pork Carnitas to Baja Cod and El Grande Navegar “The Big Surf”. I’ll be back, waiting in the car park surreptitiously for the fun to begin again. See you there.