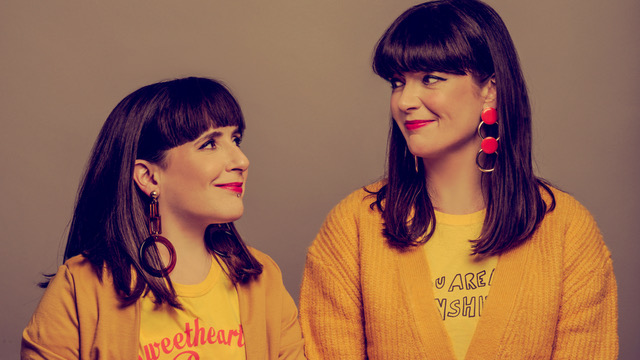 “Luckily running your own company is much more glamorous than we thought. Just yesterday we stayed in the Novotel in Milton Keynes and had to walk up the dual carriageway to buy food from Asda. I mean how much more rock-n-roll can it get? Our room even had its own espresso machine.”

I am chatting to Rachael Spence and Lisa Hammond about their new company Bunny Productions and ensuing show Still No Idea.

They are hilarious, entertaining and self deprecating, but finding out what their new show is about is harder:

It turns out that when they first wanted to make a show they had no idea where to start, so went out onto the streets and asked the public. What story should they tell? What characters should they play?

“Bearing in mind we are not exactly your average comedy duo – I’m a 4ft 1’ cockney in a wheelchair and she’s certainly not normal,” Lisa points at Rachael.

“People kept asking us if we were students and if we’d been on stage before. We kept telling them we were at The Royal Court actually. We are 40 years-old for God’s sake.”

So the duo made a show about it called No Idea, which toured the UK before heading to the Young Vic in London and on to Syria and Egypt.

Now that the world has changed, more disabled people are in the mainstream media and Lisa landed a big part in EastEnders, they wondered if the public had shifted their mentality too.

Still No Idea is therefore the next part of Lisa and Rachael’s quest: a mischievous look at two friends searching for drama, action, and a story to tell. Part-verbatim theatre, part-confession, part-comedy sketch show with a bit of singing and dancing thrown in. Turns out getting the public to write your story is quite an adventure.

“It’s a double act really and some of it is quite improvised, but there is no audience participation, which is a pet hate. We want it to be a relaxed environment,” they explain.

“We play a game like Consequences when the audience offers suggestions for the show, and then roll it up and pass it on to the next person, and then we have to perform each suggestion on stage,” they offer.

“It’s mucky stuff – a mix of styles – but definitely comedy.”

Having performed together for over 10 years, “It feels like 20,” Racheal quips, they have also formed their own theatre company Bunny Productions.

“We hope it will mean we are less restricted in what we do, and have more ownership over their work – you know the freedom to say what you want to say and do what you want to do,” they explain.

It’s hard to imagine anyone stopping Rachael and Lisa from doing that, except that as jobbing actors they worked in a range of genres.

So what took so long? “10 years is quite a short time for us,” Rachael says.

“I’m disabled and Racheel has three children, which is a disability in itself,” Lisa adds, “And because of our social-economic background it took us a lot longer to get here,” she says, before they both burst out laughing at the understatement.

So what have they learned along the way: “There is a lot of admin involved in setting up your own business,” Rachael muses, “and the general public have their hearts in the right place. People are generally very kind.”

Still no idea? You’d better get down to the North Wall on Friday and Saturday night.