Home See Art ‘Something Else’ is going on at Sewell Gallery in Radley in new...
Facebook
Twitter
WhatsApp 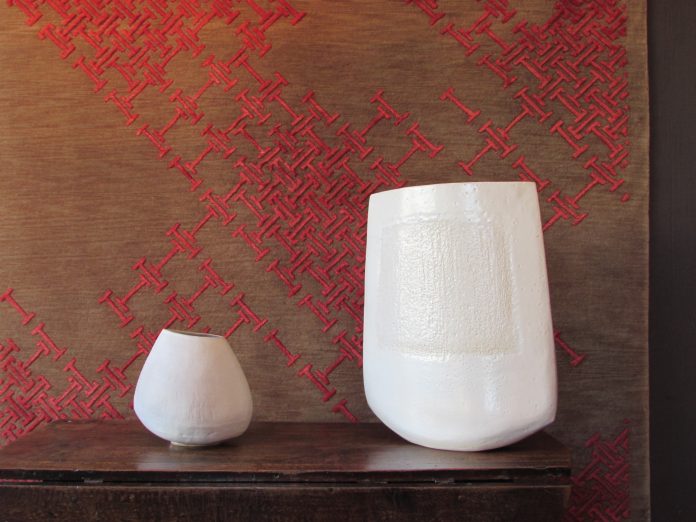 Two distinguished Oxford professionals have come together in the Sewell Centre Gallery’s latest exhibition ‘Something Else’.

After long careers in architecture and the world of antique and contemporary handmade rugs, Alan Berman and Christopher Legge have elected to try something else, and at the same time find their own voices, in a two man show of ceramics and carpets.

Alan Berman is a well known Oxford figure. A founding partner of Berman Guedes Stretton Architects, Alan has been involved in projects at eleven Oxford Colleges, including the whole scheme of the award winning Brewer Street development, the glass bridge for Pembroke College and the Leonard Wolfson Auditorium at Wolfson College.

Author of several books on design including ‘Jim Stirling and the Red Trilogy’, he teaches at the Liverpool School of Architecture and is an Honorary Fellow at Wolfson College.

Alan is an acitve supporter of the Oxford art scene and was Chair of Oxfordshire Art Weeks for many years. He is married to the sculptor Alison Berman, well loved for her quirky, ironic sculptures.

Alan has been making pots for several years and has had a Ceramics Residency in France. Not surprisingly, his architectural training has led to an interest in form rather than decoration. In series of black and white pots, he has experimented with shapes and what makes the ‘right form’.

Inspired by archetypal shapes and forms, he does not strive to be original but seeks to create a form that ‘speaks of the character of that type of pot’.

Built from coils of clay and carefully squeezed, added to and scraped, the forms slowly evolve. Alan is keen that the making process ‘remains visible, probably another legacy of my architectural training.’

With Samuel Beckett’s immortal words ‘Try again. Fail again. Fail better’ always in mind, Alan enjoys the challenge of a working practice that allows him to experiment and learn from mistakes and successes. The process is as valuable as the final piece.

It was Alan’s idea to ask carpet specialist Christopher Legge, owner of Summertown gallery Legge Carpets, to collaborate with him in this exhibition.

Christopher has worked with carpets since the 1970s and, with his wife Angela  Seger-Legge, specialises in antique and contemporary tribal weaving. His travels to Iran over the past 30 years have taken him to remote areas of carpet production and have taught him the art of organic methods of carpet making, involving the use of natural dyes and non-chemical washing.

This coincided with the work in the 1980s of German chemist Harald Boehmer who re-discovered recipes for natural dyes which had been lost after the introduction of chemical dyes in the late nineteenth century. The fashion for ‘minimalism’ in the 1990s led to a down turn in interest in traditional rug designs and saw the rise in popularity of a new style of carpet as was embodied by the designs of German designer Jan Kath.

Exposure to these cutting-edge designs, coupled with Christopher’s long immersion in carpet design, has led to him designing his own carpets which are now produced in Nepal, Iran and India. Drawing on carpet tradition and history, Christopher’s designs are an attempt to ‘find (his) own voice’. This exhibition showcases many examples of this journey.

The design of ‘Broken China’ has its roots in an ancient Chinese pattern found on textiles and porcelain. ‘AD 1’ is heavily influenced by an Art Deco design but with his own ‘personal twist’. The subversion of the pattern and innovative use of nettle and silk transports it into the 21st century. Christopher hopes that ‘this contemporary approach to an ancient art form will appeal not only to older people, but to a younger audience as well.’