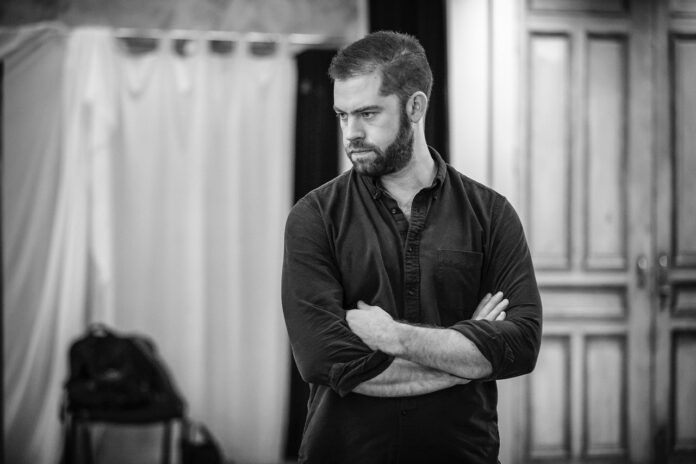 ‘Who is Simon Evans?’ has been the question on everyone’s lips since the huge success of his BBC lockdown comedy Staged, starring Michael Sheen and David Tennant.

The new go-to man of virtual drama and comedy Simon Evans, grew up in Oxford, attending The Dragon School and then Abingdon, alongside Toby Young, Tom Hollander and Radiohead, his parents running a dental practice in Kidlington.

he began writing a TV series called Staged about his predicament – a director about to start on a new West End production, coercing his stars into rehearsing in lockdown

Talking from his home in Noke, near Stanton St John in Oxfordshire, Simon’s career moved in a totally different direction thanks to lockdown, exposing him to a whole new audience.

Which is fortunate, because his next project – Tom Stoppard’s Real Thing – ground to a halt in lockdown, as did his film directorial debut Hunters In The Dark due to be filmed in Cambodia.

Like so many of his colleagues, Simon was out of work for the foreseeable future, and so began writing a TV series called Staged about his predicament, ie a director about to start on a new West End production, coercing his stars into rehearsing in lockdown.

“WE WILL THINK ABOUT FILMING ANOTHER SERIES OF STAGED, BECAUSE THERE IS CERTAINLY THE APPETITE FOR IT”

Once Michael Sheen and David Tennant were on board it was all systems go. Simon whipped up a script, he and Phin Glynn made a pilot episode, sent it to the BBC and were given the green light in May. They then had a month to film the next five episodes.

Not that Simon ever intended to star in it himself. So what happened? “Time was of the essence because we really needed to film and screen Staged in lockdown, so we aimed to edit me out at a later date if needs be. But it worked as it was, so we left it, although I’m not that apologetic in real life I promise,” he laughs.

The nation has since laughed its way through the whole series recognising not only the joyful friendship that exists between Sheen and Tennant and their ability to mock themselves, but that, famous or not, we are all in this together.

“David and Michael were amazing, more than happy to poke fun at themselves and be seen in an unflattering light at times,” Simon recalls. “They were so up for it, considering they were all working from home surrounded by children, babies and partners.

Was Simon surprised by Staged’s success? “Yes, but then I also forgot what household names David and Michael were, because we had such a tight work schedule, until they then appeared on the front page of every national newspaper.”

Thanks to Staged’s repeated airings, Simon has been inundated with collaboration requests, and is currently considering a second series of Staged.

“We are talking about it, we are having those conversations. If we can come up with the right idea we will think about it because there is certainly the appetite for another series. I don’t want to tarnish what we are so proud of but it’s also important to keep making new work and putting it out there.”

Simon is also a firm supporter of Oxford’s theatre, organising a fundraiser at Oxford Playhouse there in 2019 with the likes of Stephen Fry and Marcus Brigstocke. A cause close to Simon’s heart then? “Absolutely. I think my first theatre experience was at the Oxford Playhouse, but I love all of the Oxford theatres – the Burton Taylor and OFS.”

“It’s a very scary time for theatres at the moment, not just when they can reopen but how and what will that be like?” Simon asks.