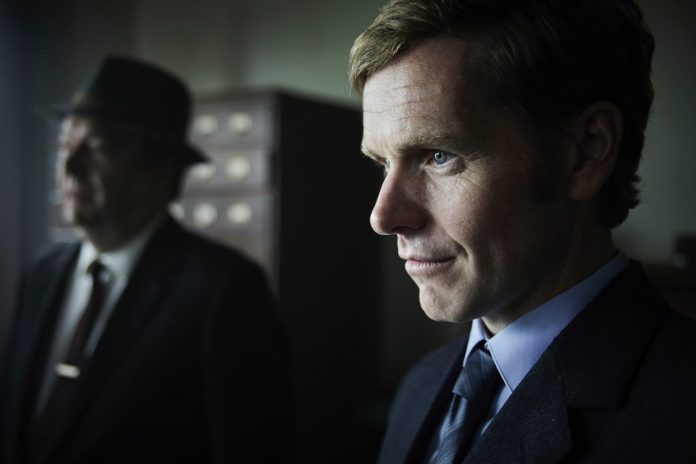 Shaun Evans is in a buoyant mood when we meet to discuss the new series of Endeavour.

Now as synonymous with the Morse stable as any earlier incarnations, he is articulate, measured and amusing.

He considers each question carefully, not wanting to be misconstrued, (his dislike of interviews is well documented), but today he is chatty and effusive, proud perhaps of what the team have achieved in this, the seventh series of Endeavour.

“I’m happy to be honest because I think that MORSE IS an incredibly rich character.”

He cares as much about the part, as the craft, which is why he directed episode one.

“You do not want to become complacent as an actor. And this is is an amazing job in many, many ways. But there is also a danger that you become lazy with your work so I always try to push myself. You have to engage with it.”

Presumably then Morse is too easy to slip back into? “I don’t want it to be easy and I think that’s important. I want to keep learning. And that’s why I enjoy the directing. Sure there is a pressure in taking on the first episode because it sets up the whole season, but I felt ready for the challenge this time. And I’m already dying to do it again because there is so much to learn.”

He does however love spending time in Oxford, adding: ” I am very fond of Oxford. My relationship with it is so wrapped up with my work, but I love it there. It’s a great place.”

I’m not a person who has a public persona, or a profile on social media. I just like to do my job and then go home and  carry on with my life.”

One big new development in the three part series is a new love interest which is exciting. Do tell more. “Violetta occupies a very distinct and unique place in the history of this character, which makes him the person that he becomes, and this series is a very definite stepping stone on the way to that.”

How exciting….so what’s she like? “She is a character we haven’t seen before – completely unobtainable – wealthy, flies around the world, she is incredibly enigmatic on one hand but then very available on the other.” In other words bad news.

What about Thursday’s daughter, the pair’s chemistry is always so tangible? “Not this time around. But would that work out for the best?” he asks. “Would she actually be the one that makes him happy. Do you know what I mean?”

As for Morse himself, Shaun says: “I thank its good that he’s enigmatic – that you will never know him. Successful relationships should be like that, we don’t need to know every part of someone. They are the most interesting people. And your work as an actor should be the same.

READ OUR INTERVIEW WITH ABIGAIL THAW HERE ABOUT STARRING WITH HER OWN DAUGHTER, WHO PLAYS HER MOTHER IN ENDEAVOUR’S FIRST EPISODE: https://www.oxinabox.co.uk/its-a-family-affair-john-thaws-daughter-abigail-stars-in-endeavours-new-series-with-her-own-daughter-playing-her-mother/

“But he has a new flat; in the first episode it still has the old wallpaper, in the second the walls are bare, and the third they are painted. So yes, there is a feeling of putting down roots and a sense of responsibility.

Shaun does however muse on Morse’s terrible taste in women adding “where would the fun be in that?” when asked if he meets someone nice in this series.

“One girl recently asked me what women see in Morse,” he laughs incredulously pretending to be offended. “He is incredibly charming though, don’t you think?”

Still, three rather than six episodes will be a disappointment for the series legions of worldwide fans? “It’s the shortest one we’ve done, and very definitely has a beginning, middle and an end. There’s way more connected tissue between them, so while you can watch them individually they are also a proper series.

“We haven’t done it this way before, and isn’t just a crime of the week scenario but invites people in. You can see more of the characters this way because they unpack a little bit more which makes things quite satisfying and richer.”

As for the plot, Shaun will only say that it’s essentially about “the nucleus of the separation between me and Thursday,” which is awful in itself, the two work mates having settled their differences at the end of the last series.

So does he still like Morse as a person? “Yes, I like him. I think there is something interesting about him. It’s hard to say because I’m playing him. But I’m happy because I think that he’s an incredibly rich character.”

One that’s impacting Shaun’s life off screen? “No, that’s the blessing of this job. It has very little impact on my life which I like because I’m not a person who has a public persona, or a profile on social media. I just like to do my job and then go home and  carry on with my life.”