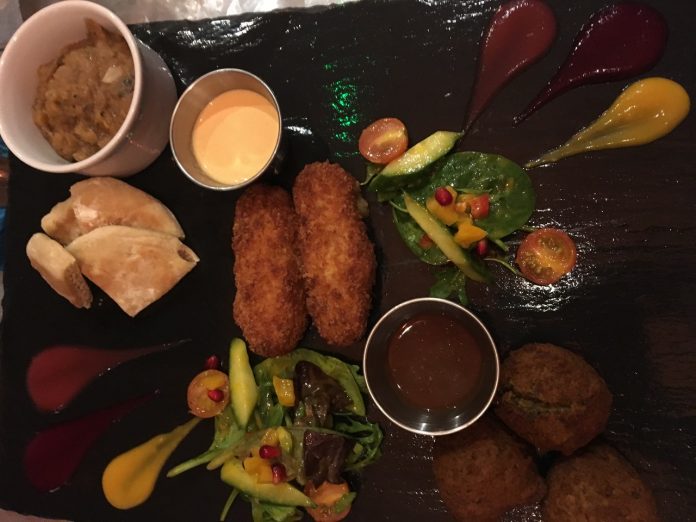 News that Spiced Roots just won Best Caribbean Restaurant in the UK, coming in at No 1 in the Top 25 (Big 7 Travel), shouldn’t come as a surprise to anyone who has eaten there.

Spiced Roots is about to emerge into the limelight. And it’s about time

It might mean those yet to try it will be rushing down the Cowley Road in a frenzy before word gets out, as the world and his wife descends on one of Oxford’s best kept secrets.

Because Spiced Roots is about to emerge into the limelight. And it’s about time.

The Spiced Roots team have been beavering away behind the scenes for years trying to get us to broaden our palates and minds by trying their Caribbean food, desperate to prove that there’s more to Caribbean food than hot chicken wings or pineapple on pizza.

What started off as a fairly simple, if exotic, cuisine in their initial shack-style scenario, has since developed into something much more refined, while losing none of its fun.

And that’s what sets Spiced Roots apart, because while they take the food incredibly seriously there, the atmosphere is much more relaxed.

Which is why over the past few years it has become one of my favourite places to eat – being consistently friendly, brilliant and fun.

More than that, Spiced Roots always surprises me, always throwing unknown fruit and vegetables into the equation, which, for someone who eats for a living, is heaven, the delight on feasting on the unknown.

For example last week I needed to enquire about Buljol ( salt cod), choka (smoked veg or dry cured fish) and saheena (veg fritters) on the starters alone, what is a sada roti, (a flatbread) ackee (a tropical fruit), cassareep (a favoured sauce) provision mash (root veg such as yam)? The list goes on.

So first up, was the saltfish croquette with smoked pepper aioli, the sheena fritters with a tamarind and cumin sauce, the jerk chicken spring rolls, and the smoked aubergine choka with sada roti.

We dived in, revelling in the new tastes and textures, transported somewhere hotter and happier where the food crunches and tastes of sea, salt and tropical winds, with a colour and vibrancy impossible to replicate outside this Cowley Road eatery’s kitchens.

The starters come together on a big wooden square board, this wonderful, communal way of eating positively encouraged, lots of finger nibbles.

When you consider that Spiced Roots also serves more varieties of rum than anywhere I know of in Oxford, and you’ll understand how ones dining experience can become even more of an enjoyable experience.

But more than anything, it’s the Spiced Roots Trinidadian management, and their smiley staff that make the restaurant so special. They are the most convivial, welcoming, happy people on earth and we love them for it.

So yes, we tried the snapper with okra, potato and carrot in a coconut stock (£24), and the oxtail and butterbeans served with mac and cheese and fried plantain, the black rice and ackee with slow roasted tomatoes, avocado, pomegranate and jerk tempah (£17), the Guyanese pepper pot beef with cornmeal dumplings, the tropical salad. The roti of curried goat – we were hungry.

And with each dish we kept drinking Caribbean rum or Carribean beer as the bonhomie and the hospitality and laughter kept on coming.

Did we have dessert? I honestly can’t remember. We over imbibed on every level so probably, before hailing a taxi and staggering home. We did however have a headache the next day, such is its charm.

I’ve been back since, sidling in when space allows it, taking anyone who will go, keen to show them something new, enticing anyone who hasn’t been, spreading the word.

Which means they are now all total converts, clogging up the tables, taking up the space, harnessing all that kitchen gusto.

So get on with it and go, while you can get a table, because Spiced Roots is only going to get more popular.