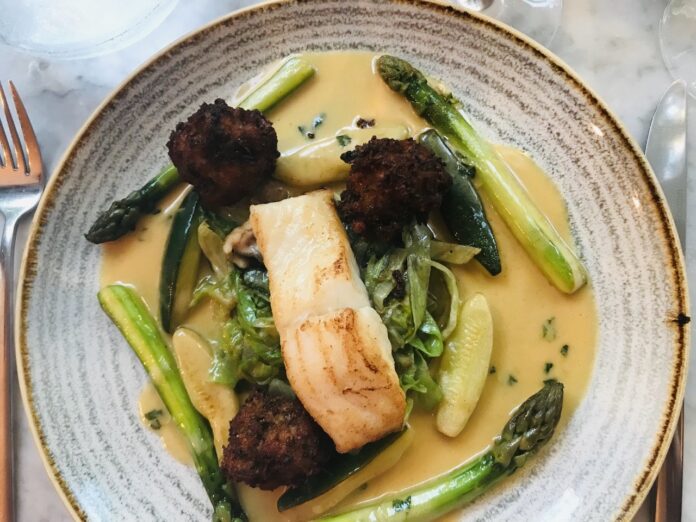 Whistlers in Chipping Norton was taken over by Nathan Phelps and Kerry Foley a few weeks before lockdown last year.

READ ABOUT IT HERE: https://www.oxinabox.co.uk/why-we-opened-a-new-restaurant-during-lockdown-whistlers-in-chipping-norton-is-given-a-new-lease-of-life/

To cut a long story short, since taking over in August they’ve only been open properly since April, (after Nathan broke his leg), so it was with great excitement that we trooped over to Chippy to finally try Whistlers out.

So why the hype? Well, Nathan is known to make all his food from scratch; from the bread, pizza and pasta to the numerous sauces, gels, oils, purees, dressing, chutneys and nages on the menu.

Plus whispers had begun to filter through about the quality of the food there. So while the menu is simple, its also promises to deliver in artisan flavour and technique.

Plus Kerry, a cheerful Kiwi and ex nurse, is a brilliant people-person so the perfect front-of-house, making you feel instantly comfortable.

Nathan and Kerry have kept the theatre bill style decor and revamped the central bar, adding some new tables outside from where you can watch the world go by.

The seared hand dived scallops with celeriac puree, Granny Smith apple gel and truffle oil are infamous, customers raving about them from the rooftops

But what to expect food-wise? An interesting mix as it turned out. After we’d had a delicious gin and tonic with peppercorns, the warm bread with whipped butter and tasty olives set the scene, the attention to detail evident everywhere.

For example although the Wye valley asparagus was a twist on a classic recipe, the parmesan crisp created a lovely textural contrast, as did the oregano flecked Hollandaise sauce which haunts me.

while the menu is simple, its also promises to deliver in artisan flavour and technique

The seared hand dived scallops served with a celeriac puree, Granny Smith apple gel and truffle oil are already infamous, customers raving about them from the rooftops. They lived up to their reputation, as much a sum of their parts as the juicy, perfectly cooked, shellfish.

it wS A deceptively skilled take on a common dish, which is what Nathan does so well

Throw in the line caught stone bass, fennel linguine, braised gem lettuce, crispy spring greens and red wine sauce (£24) and we were having a fish fest, Nathan’s forte coming to the fore.

I had to try the wild mushroom fettuccine with shallot puree, truffle dressed watercress, parmesan and a wild garlic salad, not just because the components sounded intriguing but because I had to try Nathan’s home-made pasta.

the pizzas were juicy and multi-faceted (stilton and apple chutney pizza anyone?)

The puree was placed on the plate first, the pasta and mushrooms on top so as you mixed it you discovered its hidden delights. A deceptively skilled take on a common dish, which is what Nathan does so well.

The only duff note was the side salad and it’s rather uninspired dressing, but it was little cause for concern.

UNCONVENTIONAL BUT FULL OF SURPRISES, WHISTLERS IS COVERING ALL THE BASES IN ITS OWN INIMITABLE STYLE

The more unusual spiced falafel, carrot and caraway puree, roast chickpeas, spinach and rocket with a sweet chilli dressing was another surprise hit, and an original and welcome option for vegans and vegetarians alike.

As for the sticky toffee pudding with caramel sauce and tonka bean ice cream (£7.50), (with three spoons), we’d finished it before we could even take a photo, it was that good.

A plate of the three artisan cheese with apple chutney and oatcakes (£10) was a fait accompli. Carefully chosen, they finished off a really exciting meal.

And with a full stone-baked pizza menu to try as well, we returned to Whistlers soon after to ensure they were as good as they looked – and I can report back that they were as diverse (stilton and apple chutney pizza anyone?), complete with satisfyingly burnt, doughy edges and plenty of toppings.

So as you can see, unconventional but full of surprises, Whistlers is covering all the bases in its own inimitable style, and we enjoyed every quirky minute.