The final day at Truck saw the biggest band of the weekend (in terms of the number of streams) Two Door Cinema Club headline to a packed main stage.

Like Foals the night before, the crowd stretched far away into the arena with a tightly packed sea of fans up front.

Easy Life also attracted a crowd far bigger than the Market Stage was able to accommodate, many fans having to make do with listening from outside the tent.

Sea Girls were well received by the Truck Stage crowd in the early afternoon with their short and upbeat set allowing for a party-like atmosphere in the sun.

You Me At Six played as the sun set with “let’s hear it for the Arctic Monkeys” being met with cheers from the crowd. Sadly though, and unsurprisingly, none of the Monkeys themselves were present to hear it, but I’m sure they would have appreciated the gesture, and the crowd were able to enjoy a few minutes hoping that Alex was about to appear on stage.

Fireworks rounded off the night and what has been a great weekend and surely the finest line up this festival has ever had, with huge names gracing the stage every day and some very exciting up and coming talent, all enjoyed at tiny stages creating a very intimate show that fans of the headliners probably wouldn’t get to experience very often.

To me the last day of Truck felt very much like an after party from the amazing three days that preceded it, although I’m sure the large number of Two Door Cinema Club fans in attendance would wholeheartedly disagree. 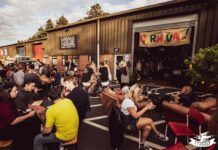 St Hilda’s Crime Fiction Weekend promises to be “most exciting and inclusive yet!”