Home Eat REVIEW: To Beef or not to Beef: Why the roast at The...
Facebook
Twitter
WhatsApp 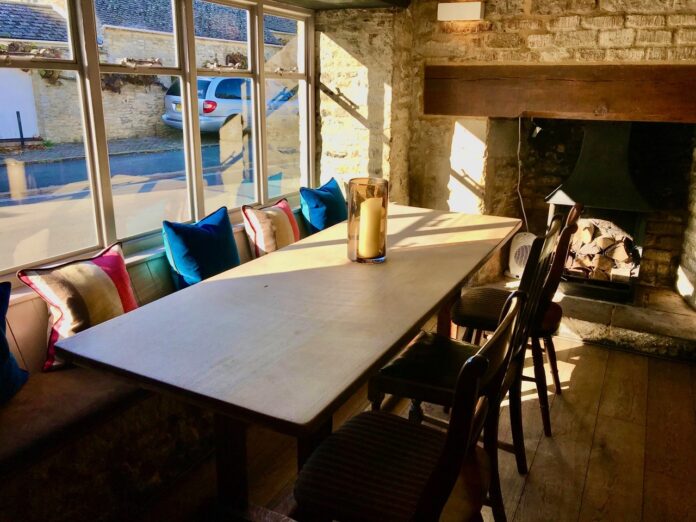 From the moment I heard about The Horseshoes’ roast potato meetings, I was on a mission to get to Witney for their Sunday lunch.

Because every Monday morning the team there assembles with head chef Nathan Bowles to discuss the roast the previous day, in particular whether the crisp and crunch of the roast potatoes met their high standards.

Because when you are running an all day service, serving hundreds of customers from noon to night, your roast potatoes need to be great at any time of day, be it 1pm or 7pm. And it’s a responsibility The Horseshoes takes very seriously.

The stakes were high however, because the one thing we have really improved at home during the pandemic is the family roast. But once in a while, forfeiting the washing up and letting someone else do all the hard work is mightily attractive.

Run by Luke Champion and Alex Vaughan, who also have The Hollybush opposite under their wing, the historic pub couldn’t be more welcoming, regardless of the current restrictions.

Yes, their sister pub The Hollybush over the road is where it’s at at the moment since their brilliantly inventive garden chalets were built (READ ABOUT IT HERE: https://www.oxinabox.co.uk/review-why-you-must-hotfoot-it-down-to-the-hollybush-in-witney-to-try-out-their-new-garden-room-dining-pods/), but the Horseshoes is more serene, rarefied and genteel.

The gang there is also lovely. We were served by manager Az, and as the sunlight streamed through the windows and we settled in an alcove of a room (it’s like a rabbit warren in there), having zapped the QR code, our excitement, anticipation and hunger mounted.

The Horseshoes boasts an extensive roast menu – from lamb, beef and chicken to veggie and veg wellington and fish and chips, as well as a specials menu. We were spoilt for choice.

It’s the simple things head chef Nathan Bowles does so well here, taking English pub classics and snacks and giving them a nostalgic and loving touch. Take the starters for example, sausage rolls and scotch eggs litter the options, both meat and veggie versions, and once again their reputation proceeded them.

The pork and thyme sausage roll with cherry tomato & red onion relish (£6) was huge, seasoned, and dense surrounded by thin, golden, crispy, flaky pastry, and we all fought over it. The warm scotch egg with mushroom ketchup followed suit, none of that bland dryness you get in shop bought versions, but a perfectly cooked egg contained in delicious home-made sausage meat which drew many an admiring and jealous glance.

The croquettes of pork belly mac and cheese croquettes with truffle and a parmesan mayo were crispy and moreish, the veggie Scotch egg of leek, cheddar and spring onion another ingenious twist and the calamari just so with their tartare dip.

So far so good, but all this was just a warm-up for the main event. And as the plates processed in brimming with goodies, followed by bowls of colourful veggies, we sat back in delight.

And boy it was good. The sirloin of roast beef (£18.50 all in) for example comes with an extra blade of meat, and the roast chicken with a bowl of accompanying chicken casserole. There are not only the famed roasties but some delectable mash on each plate and a celeriac puree I could have eaten on its own with a spoon. As for the Yorkshire puddings they towered over the plates begging for gravy.

The Cotswold lamb and the vegetable wellington (£15) went down equally well, the root vegetable filling of the latter an ingenious mix, beautifully flavoured.

The cauliflower cheese needed a bit more pungency and sauce, but otherwise all of the roasts were an absolute treat.

For the first time that day there was silence as we concentrated on eating such delectable fare, intent on getting to the end, praying not to fill up too soon. It was a truly epic roast dinner.

How we managed dessert I’ll never know but having seen the choux bun with blackberries and praline cream served to the next door table I knew what I was having.

Between us we also managed the sticky toffee pudding and ice cream – mammoth, rich and dark as expected, the chocolate fondant which oozed out with just the right consistency and the warm gingerbread sponge with spiced pumpkin puree, candied pumpkin and creme fraiche, which was a sophisticated and carefully executed addition.

We were done in by then on, almost unable to stand, desperate to get home and lie down in front of a good film.

But as far as Sunday roasts go, The Horseshoes has got it down to a tee.

And the roasties? It will be interesting to see what the verdict was at Monday morning’s meeting, but we had nothing but praise.

The Three Horseshoes is at 78 Corn Street, Witney. OX28 6BS.