Home See Comedy REVIEW: The Good Life is at Oxford Playhouse all week but does...
Facebook
Twitter
WhatsApp 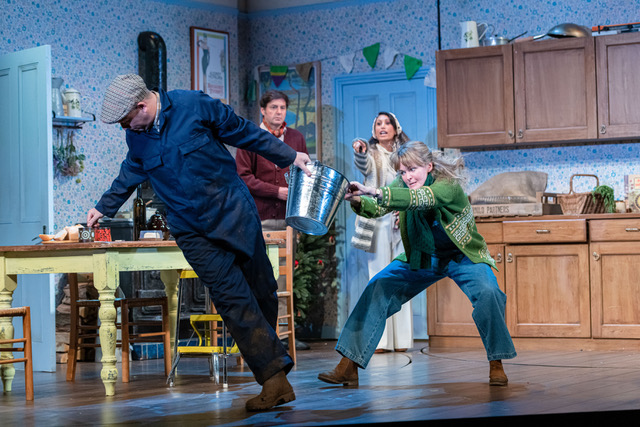 Despite being set in the present day, with programme notes about sourdough, WFH (working from home), the gig economy and allotments to keep us in the now, this production of The Good Life, at Oxford Playhouse all week, remains very firmly anchored in the 1970s world of the hugely beloved original TV sitcom.

For those who didn’t watch it first time around, The Good Life features two sets of neighbours; Tom and Barbara Good, played by Rufus Hound and Sally Tatum, who opt out of the rat race to become self-sufficient in the suburbs, much to the disdain of their aspiring neighbours Margo and Jerry Leadbetter, played by Preeya Kalidas and Dominic Rowan.

All these lovable characters are instantly recognisable to anyone (most of the audience then) who’d seen the original series.

But while Rufus Hound easily finds his inner mojo (along with the pigs, goat, chickens and all things earthy), and holds the increasingly frenetic plot together, Sally Tatum is left to flesh out her charming, put-upon wifely role for the 21st century.

Which is interesting because you’d have thought that with our current focus on a more sustainable, environmental, socially aware, diverse (good) life, it would be easier to modernise.

Had the play have been updated to reflect something of modern Extinction Rebellion and British Bake Off Britain it might have been more relevant and fun to witness.

Either way, Preeya Kalidas throws herself into the iconic diva role, perfectly offset by Dominic Rowan‘s hapless 70’s man, browbeaten by his beautiful wife, while not averse to a little wife-swapping.

But while the original TV series was an affectionate comedy of manners, the play, now unrooted in any social observation, has tipped towards a 1970’s West End farce, with all the improbable slapstick, aided and abetted by the two multi-taskers, Nigel Betts and Tessa Churchard.

The audience gave the players a warm round of applause, and while it was a pleasant and gentle way to ease oneself back into the world of theatre, I couldn’t help feeling that we all re-emerged more appreciative of the original series itself.