When sent to boarding school 200 miles from home aged seven, Stephen Fry told us: “I found very rapidly that I was not good at much that was considered important at school.

“I couldn’t run in a straight line really, catch or hit a ball, I couldn’t swim until I was about 14 as I recall.

“I was just hopeless! I couldn’t sing or dance, I couldn’t draw, but the one thing I had always been passionate about was writing stories, telling stories, talking about and reading stories. So books were my absolute passion; and I particularly loved Greek myths. They were my subject.”

And so the reasoning and impetus behind his current tour ‘Mythos. A Trilogy: Gods. Heroes. Men’, his first one-man show in nearly 40 years, was born.

More recently, after reeling off a Greek tale to friends, he realised that most people only have a basic understanding of one of his favourite subjects – Greek Mythology.

So, he set to work. The result is Stephen Fry in person, at the New theatre for three nights, based on his latest publication: ‘Mythos’ and ‘Heroes’ – a lively, fun and accessible retelling of the Greek myths interspersed with gems, questions and general foolmongery.

Great PR, or true entertainment? We cared little, because seeing the great comedian and thinker waxing lyrical about one of his favourite subjects, with his intoxicatingly passionate manner, was a privilege.

Split into three separate shows, one on each evening and finishing on Saturday, each is a standalone, so the well prepared have managed to bag seats for all three.

Last night focused on the Gods, while the second and third evenings are about ‘Heroes’ and ‘Men’ .

Written by, and starring Fry, he sits alone in a comfortable studded leather chair, only the screens behind him accentuating the individual stories he weaves into the central narrative. His soothing voice does the rest.

He begins with an empty universe, taking us on a vivid journey through the births of the Gods and all the mischief and misery they found themselves in.

He gives the Gods different voices to fit their personalities, providing us with animated characters to conjure them up in our minds eye.

At one point he creates the slightly too realistic sound of vomiting during a particularly graphic adventure. “Don’t worry there’s only one more” – he reassures us.

Grimacing and laughing in quick succession, we were encouraged to email questions and thoughts during the interval about the show so far, to oracle…….

In the second half he teases that “only if we were in Cambridge” would he get more intelligent questions – earning groans.

Even Fry couldn’t give us an answer to Brexit, which received one of the biggest laughs of the night. “There are certain things that the oracle can never answer, because they’re too deep, too profound, too unanswerable. So to all of those who wailed at the oracle and begged him to find some answers, I’m sorry.”

The narrative is nicely broken up by two rounds of ‘Mythical Pursuit’ – where an audience member is picked to choose from one of the related Greek categories on screen, giving Fry the opportunity to go off into another enthralling tangent.

It is during these games that we learn how his love of Greek myth came about. “There was something about the juice and the completeness of Greek myth that I loved.”

His mother told him the stories when getting him to “wash up or do something” or when he went to bed at night. “Then I started reading books about it,” he tells us.

It meant that he was very keen on Latin – “I loved it. It was like a code to me.” His Latin master asked him if he wanted to learn Greek, and so, the rest as they say, is history.

Constantly providing us with the etymology of our words, he thus demonstrates how embedded ancient Greek is in our language and culture, to this day.

He also explains to us that Pandora had a jar, not a box, as it is more commonly known; the mistake down to a simple mistranslation.

We also learn how phrases such as ‘the Midas touch’ came in to being.

Infused with warmth, comedy and his particular brand of erudite wit, his delivery and knowledge, delivered with such apparent ease, is more than impressive, as he steers us smoothly through the Greek’s immortal lives.

Undoubtably one of the greatest narrators of our time, it’s like lovingly listening to your favourite teacher as a child, only better.

“I’m sorry about all the incest,” he jokes – the edifying stories full of adultery, violence and the vast powers of the Gods, providing fascinating subject matter.

A brilliant combination then of fascinating tales from the king of story-telling.

‘Mythos. A Trilogy: Gods. Heroes. Men’ is educational, interesting and entertaining. Much like Stephen Fry himself then, Gods or no Gods.

Stephen Fry’s ‘Mythos. A Trilogy: Gods. Heroes. Men’ runs at the New Theatre until Saturday. If you’re quick a few last-minute tickets might just be available at atgtickets.com 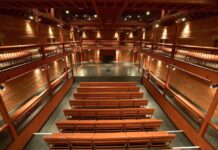