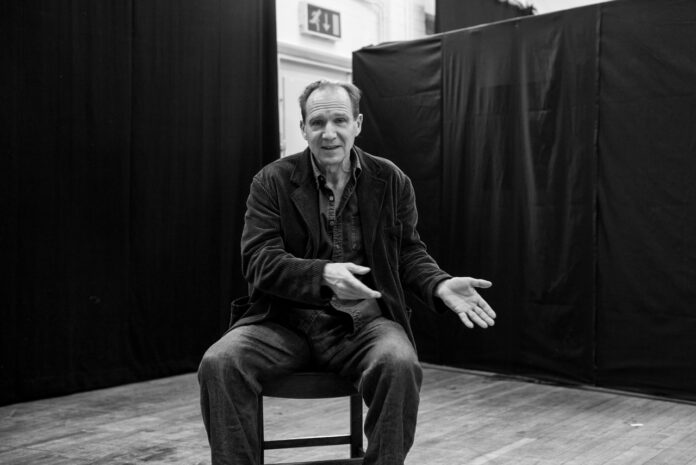 There was a wonderful moment at the start of Four Quartets, where Ralph Fiennes appears on stage at Oxford Playhouse, terribly unceremoniously, and sits down ready to embark on the Herculean task, even for someone of his calibre, of relaying T.S Eliot’s series of poems.

And while he prepared to embark on 80 minutes of soliloquies, we had the chance to admire this elegant global star dressed simply in a grey shirt and trousers, barefoot, ready to enlighten us.

For there before us was Lord Voldemort from Harry Potter, M in the James Bond films, Count Almásy in The English Patient, Hamlet on Broadway… the list goes on, his film credits including Quiz Show, The End of the Affair, Maid in Manhattan, The Constant Gardener, In Bruges, The Reader, The Grand Budapest Hotel, The Dig and Schindler’s List.

How many of us were there there to see him, just to be at the theatre again or because they loved TS Eliot’s poetry is anyone’s guess. But enlighten us he did.

For those inexperienced in TS Eliot’s verse, Four Quartets consists of four poems (‘Burnt Norton’, ‘Little Gidding’, ‘East Coker’ and ‘The Dry Salvages’) that include meditations on the nature of time, faith and the quest for spiritual enlightenment. Each poem is also associated with the four classical elements – earth, air, fire and water.

Written over a period of years, Four Quartets was finished during WWII and contains some incredibly relevant and ironic reflections on surviving periods of national crisis.

Narrating them however over 80 minutes without an interval was an art in itself, as Fiennes launched into the softly evoked collection of Eliot’s thoughts, ideas and musings, the narrative taking second place to the poems’ form and crescendoes, the peaks, the timing, the theme and the relevance.

But regardless of the prose it was a masterclass on how to do it.. Give or take apt lighting changes, the two large tombstones framing the stage and the minimal props, it was just Fiennes and the verse he had to impart, that kept us mesmerised.

Almost hypnotic, the words poured forth unchecked. Fiennes didn’t stumble, but his pronunciation and delivery was calmative and inspiring, like a monk reciting his prayers.

Of course no one-man show can survive without a stellar team behind them, and although Fiennes also directed Four Quartets himself, he was joined by designer Hildegard Bechtler, Tim Lutkin  on lighting, Christopher Shutt in charge of sound, Assistant Director Eva Sampson and Movement Director Fin Walker.

Enlightened, thoughtful and prescient, Fiennes’ world premiere unsurprisingly got a standing ovation, but his and TS Eliot’s prophetic words will stay with me for a long time.

Certainly a novel way to help reopen Oxford Playhouse and a highlight of its Together Again season, it was an enormous privilege to be there at all.