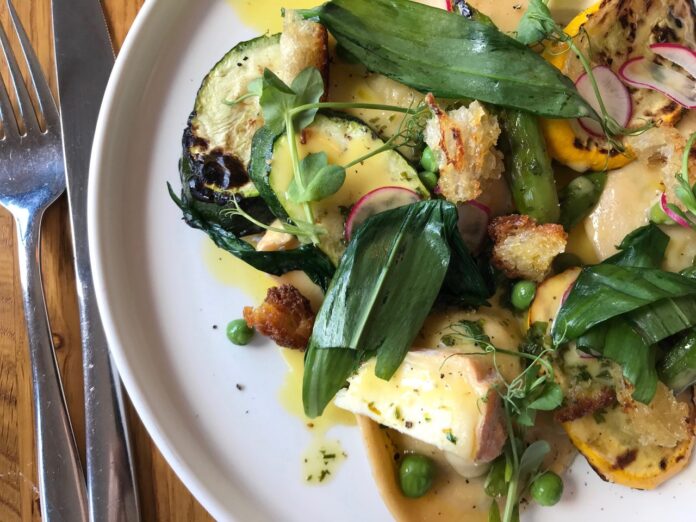 The pressure was on. Having been released for the first time in months, the prospect of eating out again has loomed large in all of our lives. Where though is another matter. So many pretty pictures on Instagram, so many gardens, tents, pods, awnings, observatories and orangeries to choose from. (SEE OUR GUIDE HERE https://www.oxinabox.co.uk/top-60-where-to-eat-outside-from-april-12-in-oxfordshires-pubs-cafes-and-restaurants-get-booking/)

Like a starter out of the traps, I knew where I was heading, sprinting over to The Hollybush in Witney to try out new head chef Simon Bradley’s food.

Simon has just been appointed head chef there. He’s a local chap with an impeccable CV who once taught a young Tom Kerridge, and has worked in top restaurants all over the country. But now he’s come home and I, for one, am delighted. https://www.oxinabox.co.uk/the-hollybush-in-witney-nabs-top-chef-simon-bradley-to-give-the-pub-a-new-direction-in-the-kitchen/

My family is now also delighted. They have been talking of little else since, gazing into the distance days later saying things like “I just can’t get over that pie” or “I didn’t know you could make ravioli with potatoes.” Suffice to say it was a suitably memorable meal for a pivotal occasion, and one we will never forget.

If you haven’t been since landlords Luke and Alex converted the garden you may have missed the colourful dining houses in the garden, the new covered dining area or the pastel coloured tables scattered throughout the outdoor space. There is plenty of room and scope for all eventualities now come rain, wind or scorching sun (here’s hoping).

It’s the flavours that talk to you, combined with a reassuring attention to detail and an artistic, almost whimsical approach to presentation

As a family unit we were happy in the dining houses complete with their own dining table and glass fronted doors which we kept open, through which emerged the most wonderful and cohesive series of dishes.

From start to finish, Simon and his kitchen team did not put a foot wrong, his distinctive, refined taste evident in very dish.

It’s the flavours that talk to you, combined with a reassuring attention to detail and an artistic, almost whimsical approach to presentation, which perfectly matches the seasonal produce..

Take my asparagus dish – it came one of two ways – with a confit egg and wild garlic or with a wild garlic pesto and Jersey Royals. The taste and bite of the latter has stayed with me since. Not only were the asparagus huge with just the right al dente crunch but the wild garlic pesto was absolutely divine, without being overpowering. The alternative version was being consumed in an equally enthusiastic manner on the other side of the table, as was the stylish pressed confit rabbit & ham hock terrine with celeriac remoulade, a picture on the plate (£8).

As for the white onion soup with wild garlic & almond pesto and hot buttered toasted cheese bread (£7), the subtle light depth of flavour dotted with the more pungent pesto was another gift of a dish.

The homemade bread being munched by the children disappeared in seconds, as did the Scotch egg from the nibbles menu and the Cheese & Ham Croquettes with Wild Garlic Mayo which were a must (£6.50).

the recipients announced it was the best pie they’d ever eaten!

There were two stars of the show for mains – the pie of the day – in our case guinea fowl, ham hock and leek, with greens, clotted cream mash or chips and gravy. (£17)

The clotted cream mash that I’d glimpsed on Instagram sounded and tasted wonderfully indulgent and creamy, but it was the pie itself which swept us away – its succulent, dense, earthy filling stunning its two recipients who announced it was certainly the best pie they’d ever eaten! Quite a claim!

The sea trout with Jersey Royals, a herb emulsion & scurvy grass (a first for me) was another success, the generous portion of fish perfectly seasonal.

The burgers were enormous and hedonistic (£15.50), the chips hand cut and carefully guarded, but it was the potato ravioli that stole the show and demonstrated most avidly what Simon is bringing to the kitchen.

Simple sounding, the creamed potato ravioli with Evenlode cheese, charred spring vegetables & fried breadcrumb (see main pic) as a starter or main (£8/£15), was original, clever, seasonal and unpretentious. Every mouthful was different and exciting – the perfect definition of spring.

Unsurprisingly, there were only a few takers for puds, despite Simon’s tempting offerings. But the warm Bakewell tart with custard, raspberries & vanilla ice cream (£7) had to be done and was much admired.

As first meals go The Hollybush is setting the bar sky high, so if I were you I’d book as soon as you can. Simon Bradley is a huge talent and one I plan to enjoy over and over again.