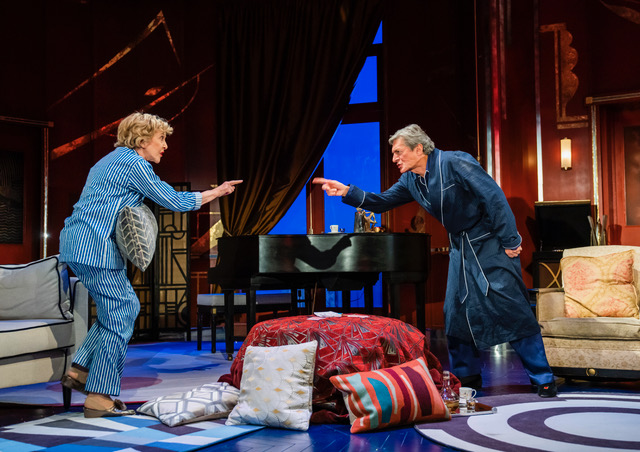 From the moment Nigel Havers stepped out onto his terrace in Deauville, there was a visible shift in the audience, and we were swept away on Noel Coward’s quick witted and fanciful journey Private Lives – a tale of three marriages.

Patricia Hodge created a similar frisson from her matching balcony, her dry sense of humour, quick tongue and laissez-faire attitude, more than a match for Haver’s rakish charm.

Little surprise then to find the pair had actually been married before, magnetically and irresistibly attracted to each other, and as quickly repelled.

“Coward is not meant to be taken seriously. It a romp, a ride, a cathartic escape with two dazzling leads and much hilarity”

That were both on honeymoon, to other people, is only a minor source of irritation, quickly brushed under the Art Deco carpet, after bumping into each other in neighbouring hotel suites.

“Honeymooning is a very overrated amusement,” Amanda drawls as they quickly exit and retire to her flat in gay Paris where she sings beautifully, and Elyot plays the piano, leaving poor Victor (Dugald Bruce-Lockhart) behind, already hopelessly out of his depth, alongside the long suffering Sibyl (Natalie Walter).

And so a delightful, farcical, amusing and hair-brained caper unrolled before us, its fast-paced tempo, whisking us off to witness the sheer idiocy of love as we pondered the validity of uncontrollable passion versus something more comfortable and reliable.

Of course even Coward knew the fallacies involved in true love, happy to portray all four as hugely entertaining, vacuous and shallow individuals.

Whether he had envisaged Havers and Hodge playing the parts he had in his 30s, is anyone’s guess, but why not? Elyot and Amanda are both on their second marriages, so it was certainly feasible, although their age rather cramped their passionate sofa antics as Amanda’s stomach pains and Elyot’s creaky bones hilariously dampened their ardour.

Their declining years did however ensure that the two leads appeared more futile and petulant than a couple say half their age, but as they were all as bad as each other, we cared less.

There were a few uncomfortable moments however, even though the script was apparently tweaked to take out Elyot’s (Havers) penchant for giving Hodge the odd clip, because one slap is still one too many.

His comment that it’s “a woman’s job is to allure the man” then drew stern gasps of disapproval more akin to a pantomime baddie, but as the tussling and arguing continued, we did too.

And besides, Coward is not meant to be taken seriously. It a romp, a ride, a cathartic escape with two dazzling leads and much hilarity.

“Theatre should be entertaining, and that certainly was,” the lady behind us at Oxford Playhouse commented as we left our seats.

Which would explain why it was sold out on Tuesday night, so get in quick for some Coward-esque light relief. God knows we deserve it.

Private Lives is at Oxford Playhouse until Saturday March 5 with very limited availability. Book at https://www.oxfordplayhouse.com/events/private-lives