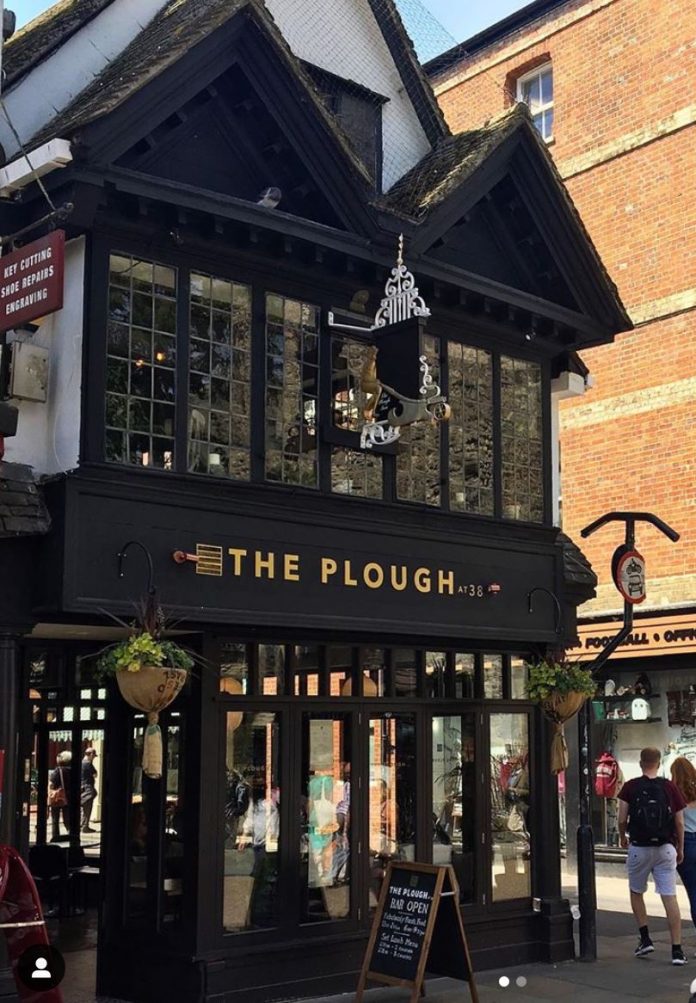 “Opening The Plough at 38 has been the hardest thing I’ve ever done in my life. But I am confident,” Chris Mulhall smiles. “It’s going very well. And with head chef Jan Hvizdos on board, with a bit of luck it will all go to plan.”

For Chris Mullhall, who runs 1855 wine bar in the Oxford Castle site, the former Austin Reed shop, provided him with the perfect opportunity to realise his dream, spurred on by the likes of Tom Kerridge and Heston Blumenthal – to run a, historic, independent pub in central Oxford serving excellent food.

38 Cornmarket used to be a favourite hostelry called The Plough Inn from 1656 to 1924 serving locals and weary travellers entering Oxford through the North Gate on to Northgate Street, later renamed Cornmarket.

while Chris’ and Jan’s expertise must be applauded, it is up to us to support local, independent businesses who go that extra mile. We must respond in kind, to make Oxford the kind of culinary hub and centre we all yearn for

“I started this project in June 2016 when I heard about the closure of Austin Reed,” Chris says. I decided to walk past the shop, and thought ‘yes this is the place’. It had location, location, location, which gave it footfall, a must when you start at the get-go.

“I wanted to get away from the chain led mentality of George Street and its generic restaurant set-up. I wanted a historic building – it had to ooze history.”

A year of negotiations began, with the landlord, agents, council, planners and the college for the Grade II listed building. Chris did a pitch and got the go-ahead.

The rest is lots of history and hard work, the former tailor’s now transformed into a bright, welcoming space. “We are getting there,” Chris smiles. “No one else in Oxford is doing what we are doing.”

Now a bustling hub of activity, it boasts a bar downstairs with its own micro-brewery and tables for casual dining and coffee, while upstairs is a stunning open plan restaurant manned by top chef Jan.

Jan worked at three Michelin starred restaurant The Fat Duck as sous chef for Heston Blumenthal, followed by stints at The Hinds Head, The Experimental Kitchen and The Crown, and then Gilbey’s and The Chequered Inn, Weston Turville. His pedigree speaks volumes about what Chris hopes to achieve.

“we are getting there. No one else in Oxford is doing what we are doing.”

Working in partnership with Activate Learning, Chris has also set up an apprenticeship style scheme with City of Oxford College’s catering students: “We take the best wanna-be students from the local catering college and Jan mentors them, which helps with my social conscience – to help train chefs of the future,” he says.

Jan, who hails from Czechoslovakia, is all about fresh ingredients, flavours and making everything from scratch – from the bread to ice cream.

I’ve eaten there twice, once before Christmas, when we had a fabulous and surprising dinner, lodging Jan firmly on my culinary radar, and then last Sunday for lunch.

The roast was more than reasonable – £17 for the fillet of beef and £14 for the pork, with all the trimmings. The vegetarian/vegan beetroot steak with watercress, toasted walnuts, horseradish veganaise and chips, came in at £13.50.

The bread was as good as expected, the soft whipped butter and golden crust adding to the pleasure. The mushroom and fennel soup was a moment of heaven, as the layered flavours subsided, the chive cream cheese in the centre adding a piquant, smooth, creamy addition to the autumnal flavours of the smooth potage and its celery oil decor. Beautiful to behold and enjoy.

There were minor improvements to be made on the menu: beetroot pannacotta for starter and then beetroot steak for mains was a bit much, however delicious. And a vegetarian roast would have been nice – they do get so jealous of watching us eat such a handsome plate of food with all the trimmings.

What a handsome plate it was. the pork ribeye rolled and sliced, the roast dry aged sirloin a generous portion.

As for the potatoes – they nearly stole the show, crispy on the outside with a hint of rosemary, and soft and fluffy inside. And then some enormous Yorkshire puddings, jug of gravy, dish of parsnips, carrots and some rather al dente cabbage and some damn fine home-made horse-radish. Hungry yet?

Onto dessert, my oh my. Nice and traditional – plum and apple crumble with ginger custard or vanilla ice cream and sticky toffee pudding, whose sponge had that depth of flavour, that treacley warmth and the necessary bounce, served with sweetened cream, a caramel sauce, a dusting of icing sugar and some homemade honeycomb.

And while Chris’ efforts and Jan’s expertise must be applauded, it is up to us to support local, independent businesses who go that extra mile for us. We must respond in kind, to make Oxford the kind of culinary hub and centre we all yearn for.