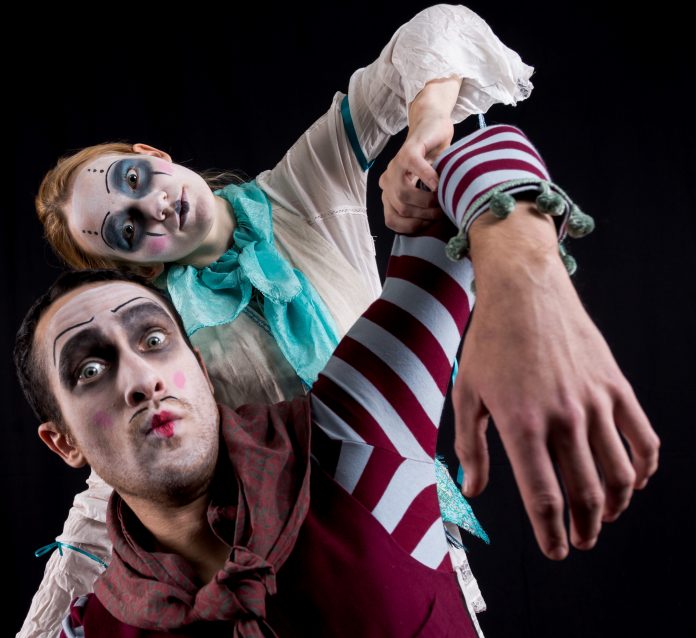 It’s Pinocchio, but not as we know it: Oxford Theatre Guild’s retelling of this beloved classic at OFS this week is not quite so child friendly.

The set is simple but effective; scaffolding with few props, a flurry of fog from the obligatory smoke machine and several mysterious figures, shrouded in dust cloths, dotted around.

An accordion player provides a suitable backdrop of music.  Familiar to Oxford audiences, the figure of Richard Readshaw enters as Geppetto, the forlorn carpenter and toy maker, and he unveils the humanoid figures, the last of which is a truly grotesque and almost disturbing, larger-than-life articulated wooden Pinocchio, operated by puppeteer Jacqui Lewis. Pinocchio is then represented on stage by Charlotte Clarke. The drama unfolds.

As the lights dim, we sit in silence for a few moments, not wishing to break the spell

This young ensemble are remarkable as uncanny puppets; there’s well-crafted choreography, movement, representations and dance on stage throughout the production, and is as smooth as silk. The costumes and eerie make-up add to the well-captured phantasmal atmosphere. Cast members play various characters along the way, and take faultless turns in spirited narration, some showcasing their remarkable musical ability.

We follow the hapless Pinocchio, who is sometimes spoilt and hurtful, but endlessly forgiven and loved, in his various misadventures as he endeavours to fathom the path of righteousness and becoming a ‘real’ boy – also known as the secret of ‘growing up’.  As an audience we are compelled to reflect on the desire to fit in, the dangers of succumbing to peer pressure or temptation and greed; and the consequences of not listening to those niggling voices in our head, here supplied by the whispers of cast members.

There’s also a warning to all regarding being naïve and taken-in by those with superficial charm, but sinister intent – the dark paths we could be led down and maybe sometimes softly tread, with, I felt, a vague reference to people trafficking.

This is dark material!

Our little man eventually, of course, redeems himself and saves his father. As the lights dim, we sit in silence for a few moments, not wishing to break the spell.  At almost two hours, with an interval, this production is captivating enough to hold attention.

But don’t forget to bring your own couch to hide behind…….

Pinocchio at OFS until Saturday. Tickets at oldfirestation.org.uk or 01865 263990