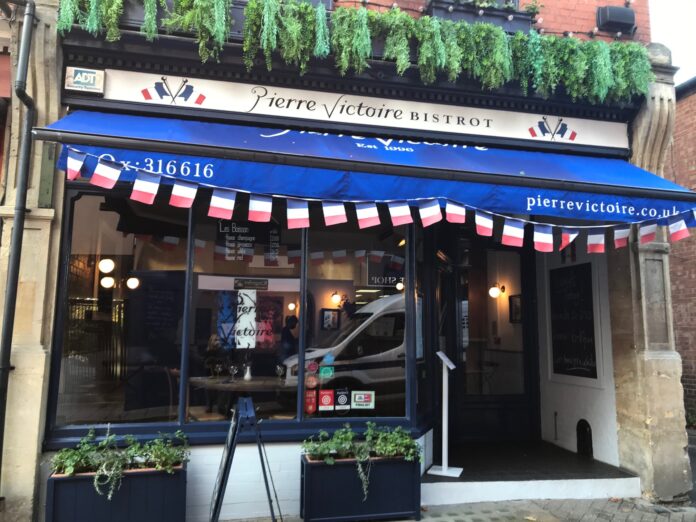 I could hardly walk after my meal at Pierre Victoire. Such was my gluttony I could scarcely move. I had to be basically carried out of the Little Clarendon Street bistro having eaten my own body weight in cheese.

It was entirely my own fault. My dining companion demonstrated much more admirable self control where the starters were concerned, by kicking off what was supposed to be a light lunch with some whitebait and tartare sauce.

I, on the other hand couldn’t help but fall for Pierre Victoire’s blatant and indeed applauded menu which include some wonderful old favourites, most of which have long since gone out of fashion.

And yes there was a time when every pub, wine bar and wedding would serve deep fried brie with a cranberry sauce to varying degrees of success, until what was a classic French brasserie dish was foisted by its own petard.

But there it was, unashamedly alive and kicking in Pierre Victoire, and the first thing I ordered on perusing the menu, despite all the classics jostling for pride of place from moule mariniere to calamari, crab salad, terrines and parfaits.

The pane brie arrived with an apple and pear compote and was just as I’d remembered – moreishly crispy and oozing. I enjoyed every second.

I had however totally forgotten that the whole reason we were there was to try a firm favourite – the tartiflette – traditionally mountainous fodder, so heavy on the old cheese and potato front, hence the overload.

So when the wonderful Alpine combination of potatoes, reblochon cheese, lardons (optional) and onions, layered up like a lasagna and then baked, arrived for my mains, served with a piquant salad, I carried on regardless. And was I repentant afterwards? No, because it truly hit the spot, both for authenticity and simplicity.

And that’s why Pierre Victoire is so beloved, and such a favourite ‘neighbourhood’ restaurant, because you can just pop in, before or after the theatre (once upon a time), a film, or for a quick lunch and it doesn’t need to be a big deal.

It’s a lovely, unpretentious and fluid place, regardless of Covid. There’s no fuss and bother, no singing and dancing, and it was a firm favourite in our Ox In A Box Food Awards.

The prices are as upfront. £15 for two courses and £18.50 for three. Wednesday – Saturday from 12 noon-2.30pm. We obviously couldn’t manage dessert, just managing to stagger out in time to make our train.

But with my eye firmly on the Fondue Savoyarde next time, it won’t be long until I return. That I can promise.