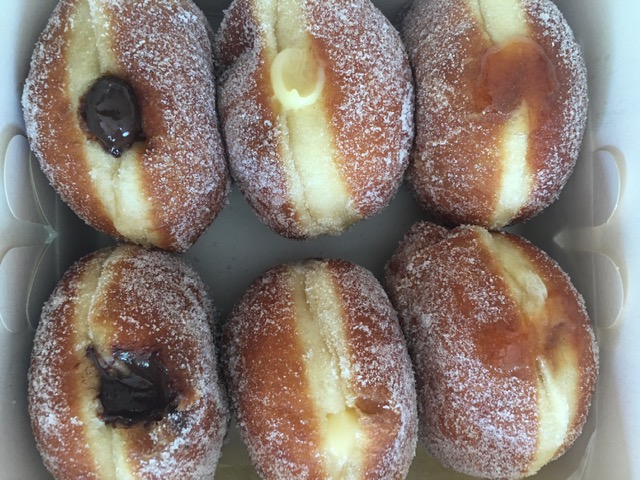 New doughnut delivery service Patron, which began in Oxford during lockdown, is selling out every week. But where did it come from and who is behind the English doughnut business?

The brainchild of chef Frideswide O’Neill and her boyfriend Sam Reed, the couple moved to Oxford just before lockdown.

As neither were working they decided to find a new avenue for their culinary talents and as Sam is a coffee specialist who loves doughnuts, the pair decided a new doughnut delivery service would work well in Oxford, and began experimenting with doughs and fillings.

The results have been extraordinary, the first week’s concoctions selling out in a day. Demand has continued at the same fast pace, selling out every week

The result is their brand new company Patron, which has only been running for a few months, and is already an unprecedented success.

“I think people have just been craving sugar,” Frideswide says, so named after Oxford’s patron saint, “but that’s what’s so great about starting up in a smaller city than London. Oxford has been a dream and has really embraced the concept.”

“People love doughnuts but tend not to make themselves because it’s quite a time consuming process. Plus we had all the equipment so there were no start up costs. We wouldn’t lose money if it didn’t work, put it that way, so Patron was cheap to set up.”

Soft, chewy, fresh and sugary, the fillings contrast with the sweetness – the sharpness of the lemon curd, the darkness of the chocolate, the tang of the jam – which had the kids buzzing with excitement in a way I haven’t seen since lockdown began!

Frides took her first batch to Jericho Coffee Traders who loved the doughnuts so much they urged her to start selling them straight away, and the coffee company now runs Patron’s Saturday morning takeaway service at their Botley Road base.

To give you an idea of how delicious her Patron doughnuts are, last week’s recipes included toffee apple, lemon curd and raspberry jam and this week – plum jam, chocolate praline and tonka bean, each week’s flavours being announced on Instagram.

And we know because we’ve tried them! Soft, chewy, fresh and sugary, the fillings contrast with the sweetness – the sharpness of the lemon curd, the darkness of the chocolate, the tang of the jam – a real treat freshly delivered to your door which had the kids buzzing with excitement in a way I haven’t seen since lockdown began!

The reaction has been extraordinary, the first week’s concoctions selling out in a day. Demand has continued at the same fast pace, selling out every week, which Frides and Sam are obviously delighted about.

“We hoped there would be a market for our doughnuts, but would’ve been happy with a few orders to keep us busy. We had no idea they would be so popular,” she said.

And what is the difference between English doughnuts and American donuts? “American tend to be glazed and with holes in while English are filled with things like custard and jam.”

Making the doughnuts is a long process though, the dough being rich like brioche and needing to be proved three times, once at 3am which means Frides is used to getting up in the early hours.

Sam is the delivery boy, cycling around Oxford with the doughnuts, banana bread and brownies that Frides also makes, from Wednesday-Friday, getting to know the new city where the pair have made their home.

Tap Social have also become big fans, not only using Sam and Frides’ catering horsebox at its new White House site on Abingdon Road, but also selling Patron’s doughnuts and brownies there.

Frides is now producing around 250 doughnuts a week, and knows that the capacity for more is extensive.

She is however wary of over-stretching themselves and says she doesn’t want to become nocturnal in the process, happy for now at the current pace of production.

Instead she wants to concentrate on the sustainability of her ingredients by introducing things like English cobnuts and other interesting and under appreciated local produce to her recipes.

She must be pleased then with how it’s going? “It’s been really exciting even if I do miss my sleep. Now I know what it must be like getting up at all hours of the night for a baby,” she laughs.

“It’s been a big challenge and a really nice way to get to know Oxford and its residents a bit better. It’s also been great in terms of our physical and mental health. So yes, more than happy.”