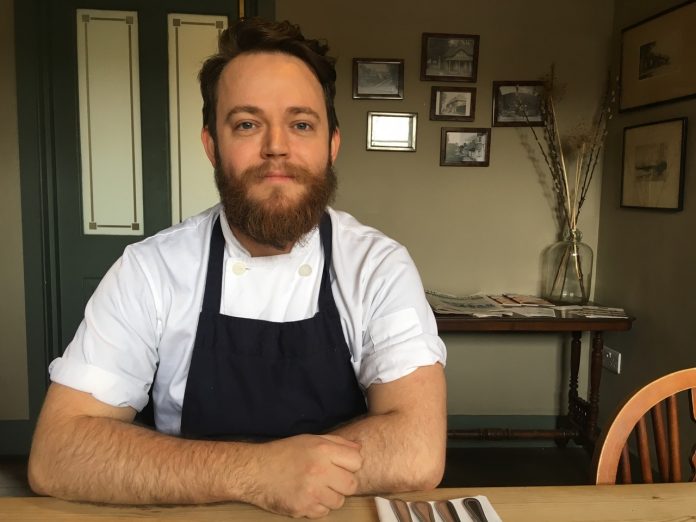 The fresh faced, blue-eyed, bearded young man in front of me looks more like a musician than a chef.

But then Liam Whittle toyed with becoming a guitarist rather than slaving away in the kitchens of some of the UK’s best restaurants.

Thank God he didn’t, or I wouldn’t have eaten the sumptuous meal I’d just enjoyed at The Greyhound in Letcombe Regis, where Liam has just taken over as head chef.

“I wanted to know what morel mushrooms were or a Poulet de Bresse, so I’d order them and try them out, in my student accommodation”

The 32- year-old has big plans for the South Oxfordshire pub, stepping ably into the hefty shoes left by Phil Currie, keen to make his own mark.

It was a brilliant posting, Liam being one of my favourite chefs in Oxfordshire.

Young, hungry, focused and gifted, he knows what he wants and is keen to prove himself.

I first came across Liam in the kitchens of The Hollybush in Witney after an exceptional meal there. Since then he has spent a year as executive chef for Artists in Residence (Mason’s Arms in South Leigh is one) and now he’s here.

Keen to see if Liam was continuing to fly the banner for exceptional pub food, we hot-footed it to the hamlet near Wantage to find out.

“The day I stop learning is the day I die, because that’s what excites me – new techniques, new ingredients….”

Yes, is the short answer. Yes, as I ate the double baked Leonard Stanley Gloucestershire Cheddar soufflé framed in a smoked haddock chowder, the soft cheesy puff contrasting with its tiny diced chunks of potato and smoky fish, or the Cornish mussels with white wine and parsley sauce and crusty bread.

I almost forgot – the bread. Liam is known for his love of bread, but even so the olive tapenade brioche shaped like a Chelsea bun was enough – soft, doughy, positively bouncy. – it was worth the trip alone.

For mains the whole plaice with heritage potatoes (served in a little bowl so you could eat them whole with your fingers if you so required), charred baby leeks, caviar and a chive butter sauce. (£16.50).

We fought over who would have the buffalo mozzarella, free and yellow courgette, spelt and spinach cream (£15.50) which was every bit as delicious, beautiful and well balanced as it sounded.

Veggie/vegans would have also enjoyed the roasted cauliflower steak, hazelnuts, kale, golden raisin, caper and lemon dressing, which we debated.

Th fish was beautifully cooked and presented, leaving little room for dessert which we then crammed in anyway – cheese for one and the chocolate fondant with Guinness ice cream for the other, just right, not too sweet with an irony earthiness to the ice cream.

With a ‘two courses for £18’ menu, or ‘three for £22’ also on offer, our lunch proved my point beautifully, that Liam is one to watch.

An interesting chef, who studied physics at university, he spent all of his student loan on buying expensive ingredients and cooking equipment. The writing was on the wall.

“I wanted to know what morel mushrooms were or a Poulet de Bresse, so I’d order them and try them out, in my student accommodation,” he says as if it’s the most normal thing in the world.

“I suppose I’ve always been interested in how things work and I think that’s where my love of cooking comes from. I just didn’t know at the time that’s how I wanted to live my life.”

Having grown up in Middlesbrough, learning to cook with his aunties and grandparents, valuing the ethos of communal food and eating, Liam started out in the science/food kitchens of Heston Blumenthal at The Hind’s Head in Bray – “my physics background helped me to work out not just what the ingredients were but what they did in a recipe.”

“We want to be a community pub that does great food, something a bit extra. I just want to feel proud and to get better every day, to pursue new things and to take the food to the next level”

Next he moved to Bluebells in Sunninghill under Adam Turley, “an amazing place to cut my teeth”, then Sketch in London for a year (which has just received it’s third star), onto Club Gascon and finally The Bull and Last in Highgate to experience high end gastro pub cooking, where he finally felt most at home.

A stint as front of house GM followed while helping out a friend Joe McCarthy at The Wychwood in Shipton-under-Wychwood, when he was approached by Luke and Alex at The Hollybush.

Three and a half years at The Hollybush spread Liam’s name even further, particularly here in Oxfordshire.

Now living in Uffington with his wife and two young boys, while Liam is keen to forge ahead with his career and one day open up his own place, he’s entirely focused on making The Greyhound a go-to destination pub for foodies and locals alike.

“I needed a better work/life balance and I have one at The Greyhound. We live just up the road in a thatched cottage with an orchard and a big garden to grow things in, so it’s perfect,” he says.

A 48 hour working week – 4 days on, three days off, is also his aim for both him and his team. “Of course there is an extra pressure as head chef but I try to keep cool, calm and collected and not to let the emotions get to you however passionate you are about your food. And then knowing when to switch off. And when I say off, I mean off/off.”

“This current focus on British produce has unearthed lots of forgotten fruits and vegetables that people have stopped using over the years.

“That’s why I love good pub food rather than fine dining, because it appeals to everyone and it means you are always cooking something new.

“The day I stop learning is the day I die, because that’s what excites me – new techniques, new ingredients.”

“More than that? We want to be a community pub that does great food, something a bit extra. I just want to feel proud and to get better every day, to pursue new things and to take the food to the next level.

So its it ongoing? “Yes. It will always be a journey and I don’t want it to ever stop. So it’s exciting and I’m looking forward to putting new roots down. I’m very committed. So in six months time it might a be a different story. You’ll have to come back then and see.”

If that meal was anything to go by then believe me I will.