It was a bold move, bringing in Martin Sherriff to man the kitchens at The Greyhound in Letcombe Regis.

Former head chef Liam Whittle had initially put the historic country pub on the map and they were big boots to fill, but Martin has the pedigree and he was out to prove it when we arrived for dinner recently. (READ ABOUT IT HERE: https://www.oxinabox.co.uk/exclusive-all-change-as-chef-martin-sherriff-takes-over-the-helm-at-the-greyhound-in-letcombe-regis-near-wantage/)

Still as quintessentially calm and inviting as ever, The Greyhound’s loyal clientele fans travel for miles to eat here, despite Letcombe Regis’ rural location.

First up the inventive cocktails, a new addition to the offering here, which we sipped in rapture while perusing the inventive menu. It all sounded enormously appealing so took us ages to choose.

The only thing Martin has kept on the menu is the soufflés, beloved by The Greyhound’s customers, but this time in a new guise of twice baked Stanley Gloucestershire cheddar with a smoked haddock chowder (£9) that had us fighting like children about who would have it.

Being a massive soufflé fan I was immensely jealous of their offering and its flakes of fish in that dense rich smoky sauce and the light puff of the cheese, but mine was better – the crunch of the nut, tartness of the pickled egg, tang of the mayo and bite of the asparagus and the softer potato all coming together effortlessly. Really accomplished.

As for the Tandoori monkfish with caramelised cauliflower, mango chutney and cumin-spiced tapioca cracker, it was beautifully spiced, all the ingredients able to be heard. That was just the starters!

The meal that ensued was really spectacular, maintaining the Greyhound’s fastidious reputation and introducing us to dishes we’d never had, always a massive plus for me.

Take the courgette, red onion and feta cheese samosa with salad Nicoise (no tuna) a quails egg and wild garlic mayonnaise (£18) – ever had that before? Me neither, and yet it was so perfectly executed, the samosa still piping hot and crispy, the filling piquant with a really seasonal local feel to it,

In fact seasonality and local sourcing plays a big part in the Greyhound’s ethos – the honey comes from the village’s Ridgeway Bees, they use local butchers and vegetable producers, and it shows.

As for the deconstructed shepherds pie – rump of lamb and shoulder, pickled vegetables, garden pea purr and a goats cheese whip (£24.50), so much work had gone into each element of the dish to bring it together beautifully.

So yes, Martin Sherriff is making waves and proving his worth. The Greyhound is certainly one of Oxfordshire’s best culinary offerings. And with a beautiful garden to boot, and an ever changing menu, you will catch it at its best. 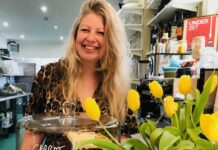