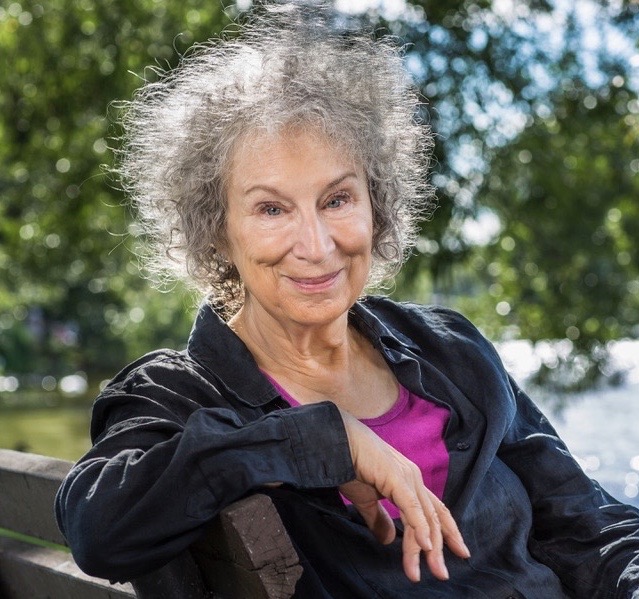 Praise be! The iconic Margaret Atwood came to New Theatre Oxford to celebrate the release of The Testaments, released 34 years after The Handmaid’s Tale.

She was interviewed by writer, comedian and author of ‘How to Own the Room: Women and the Art of Brilliant Speaking’ Viv Groskop.

It’s been an eventful few weeks for Atwood. Last week she received the Order of the Companions of Honour from the Queen, for her stellar achievements in literature; and earlier in the month she, for the second time won the Booker Prize, this time as joint winner with Bernardine Evaristo.

She is a fascinating combination of deadpan and playful, self-deprecating yet self-assured, leaving you unable to predict what she’s going to come out with next

After a thunderous round of applause to welcome her on stage, Viv noted that Margaret had brought her handbag along. Atwood explained that she now always brings it on stage as “once upon a time my fans stole my handbag”. The errant bag in question ended up with its own twitter following – #thehandbagstale.

This impromptu comment from Viv sparked Margaret into enthusiastically telling us about a new handbag she had recently brought in London, going off on an unexpected tangent on the subject, one which reoccurred to the audience’s amusement throughout the night.

“It’s my first day as an influencer!” she says as she showed us her new purse.

When asked how the three narrative strands within The Testaments came about, Margaret jokes: “It came to me in a flash of light.” She answers all questions in a calming, pragmatic manner.

She is a fascinating combination of deadpan and playful, self-deprecating yet self-assured, leaving you unable to predict what she’s going to come out with next.

The Handmaid’s outfit is now immediately recognisable to all who see it, and what it signifies. There is even a group in the circle tonight wearing the attire

Sometimes she speaks in a silly high voice or ends her sentences with the likes of “she said ominously” – as if she’s in the process of writing as she speaks. It makes for a compelling evening.

Writing The Handmaids Tale in 1984, Margaret confesses that she “had been thinking about it since 1981 and avoiding it, because I thought it was too kookie.” Little did she know then the cultural impact that it would have across the globe, still thrilling and frightening audiences to this day.

The Handmaid’s Tale TV series and how it has influenced popular culture was of course also discussed.

Crediting the hard work of the cast and crew, she praises how: “they put everything into it, so it was always going to be a good show. But even though the Republicans have been talking this way in the last few previous elections, they just haven’t won. So, on November 9 2016, not only I, but everybody connected with the show, woke up and said to ourselves: “We’re in a different show. Because the frame has changed. This is going to be viewed differently.” And it was. So that’s why we then started seeing Handmaid’s protesting, sitting in legislative assemblies, as rows of men in dark suits signed laws about women’s bodies.”

The Handmaid’s outfit, immediately recognisable to all who see it, and what it signifies, was worn by a group in the circle tonight wearing the attire.

Taking us through her writing practices, she gives this advice to young authors: “Start the back exercises early. Otherwise it’s going to catch up with you.”

The second half was a Q&A – we had been invited to tweet in during the break. Most of her witty answers make us laugh, but when she’s asked about the current political landscape, Atwood becomes more serious. “I’m disturbed by it.” She likens it to the atmosphere in the 1930’s – “and the 30’s didn’t end well. The polarisation, the extremism, the disappearance of the middle… that’s pretty upsetting to a person as old as I am.”

Amongst other subjects covered was climate change, in which she praised Extinction Rebellion and how they “demonstrate strength in numbers” – citing the group as one of the factors in making (some) politicians view the subject as a priority.

“One of the questions in my mind is, why are people endlessly [worrying about] Brexit, when they should be paying more attention to the survival of the human race?”

On the subject of Brexit, she continues that if she could wave her magic wand she would “cause us to go back in time and maybe avoid this rash, unconsidered and badly informed moment. I think lies were told and I don’t think people thought through the consequences, because the people who did this didn’t think it was going to pass. Meanwhile, here comes the election, lucky you!” she utters, her voice thick with sarcasm.

Speaking of how she copes with the dark themes in her work, her simple answer is: “It’s only a book!”

Despite the gloom present on her pages and the outside world, she finds hope in young people today, “who actually seem to care about things other than themselves.”

Atwood is utterly charismatic, funny and direct, and so the evening went too quickly. Asked if there’s going to be a third Handmaid’s novel, her response was that “we never know the future.”

As a new-born baby makes its presence known somewhere in the auditorium, Viv and Margaret are momentarily distracted from their conversation. A smiling Atwood gestures and states: “That’s the future right there.”