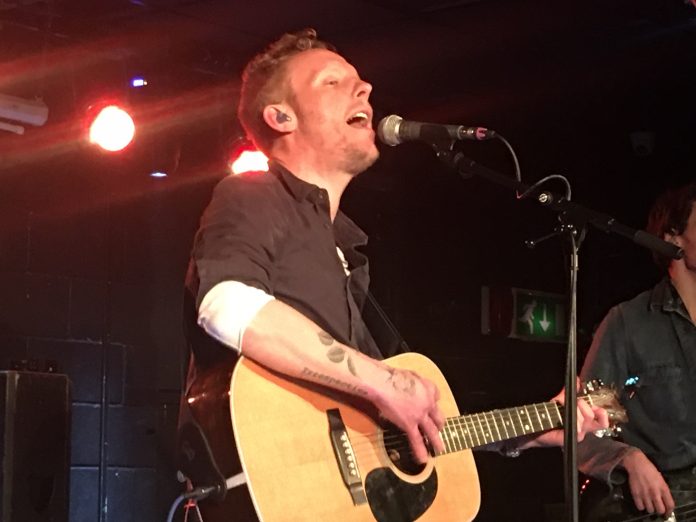 Laurence Fox at The Bullingdon

Poor old Lozza Fox. The former Lewis star is in the middle of a media storm at the moment, which kicked off on Question Time.

Such was the kickback that he came off Twitter this week, with a statement saying: “I’m going to take an extended break from social media. I’d like to say a couple of things. I think we need to learn to listen to each other better. I am learning this all the time. I believe that pushing people to the edge of their ability to remain emotionally ok through cancel culture can and does have deadly consequences…

“I know that in order for me to be ok I have to turn this noise off for a while. We all have feelings. We all have hopes and dreams. We don’t have to agree. We just have to respect that we are all different and we all deserve a chance to speak freely,” before signing off.

Which meant I had no idea what to expect when arriving at his gig at The Bullingdon on Cowley Road – banners, mobs, placards, Union Jacks, a weeping Lozza?

None of the above. Just lots of his fans and a packed auditorium. The singer and guitarist ambled on with his band and said a few words before playing a selection of tracks from his new album A Grief Observed and the last one Holding Patterns, while joking and bantering with the crowd as he went on.

His songs are thoughtful – he may not be talking to the press or social media at the moment, but if you want to know how he feels or what he thinks just listen to his lyrics.

Lozza sings in a surprisingly deep voice above love, his children, his exes (he was married to Billie Piper), grief, heartbreak, he even sings about shoes. His fans sang along to every word, and he has lots of them.

Loz, as he calls himself, did talk about said Question Time incident between songs, how he had a few tinnies on the train, and then while in the cab on the way to the TV studios, his taxi driver said: “Why does no one say what they actually think man,” so he did, rather too openly.

He also admitted that he already misses Twitter: “I might have to buy a book and actually do shit,” he laughed.

And then h added, on a more serious note: I was taught that in the acting profession you say what you think, especially as I’m in an acting family (yes those Fox’s) But now you’ve got to be on best behaviour everywhere all the time. I feel bad for celebrities everywhere, me included, and I’m growing increasingly intolerant of intolerance.”

He’s a nice bloke actually, chatting freely to his fans after the gig, taking endless selfies, helping an old lady out onto the street and into a taxi.

He wasn’t doing any interviews though, only saying “I have to step back from all that for a while because it’s not good for me at the moment.”

What he is doing is touring and playing to his fans, something he obviously gains great joy and satisfaction from. Until next time Lozza!