Home Theatre Review REVIEW: “In a world of injustice, it feels as though a wrong...
Facebook
Twitter
WhatsApp 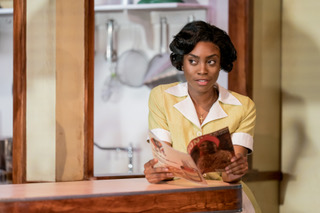 The late August Wilson was one of the great 20th century American playwrights. Two Trains Running is part of his 10 play compilation The American Century Cycle which explores the experiences and history of the descendants of Africans brought to North America.

In this piece it’s Pittsburgh in 1969. In a jaded diner surrounded by derelict shops and the rubble of demolished buildings, seven characters – an all-black cast – come and go over the course of a week.

A place of sanctuary perhaps from the chaos outside, we are given a snapshot of their lives as they spar and have heated debates with each other. Subjects discussed include slavery, unemployment, Malcolm X, and the restaurant owner Memphis’ ongoing battle with the city of Pittsburgh to “meet his price” for the sale of the building.

The bustle of street noise and music bursting into the restaurant every time the front door opens contrasts with the relative peace inside, broken intermittently with the raised voices of people’s different opinions.

The wrecking ball hanging over the restaurant’s ceiling is a symbol of its impending demolition, a looming visual sign of a new era on the horizon. I become absorbed enough in their stories to wonder where these six will end up once the diner closes for the very last time.

Set at the time of the rising Black Power movement, most of the characters seem to be searching for answers or struggling to improve their lives. Directed by Nancy Medina, winner of the 2018 RTST Sir Peter Hall Director Award, it’s through these everyday conversations that we learn of how the culture and community around them is going through a process of change.

During the pre-show talk, those who attended learned that not a single word of Wilson’s original writing was allowed to be taken out of the script. The play is therefore quite long, around 2 hours 45 minutes with a 15-minute interval in between; the cast having to work in rehearsals to get it down to that time.

On at the Playhouse until Saturday, Wilson’s work is largely unappreciated in the UK, but you might know his story ‘Fences’ – made into the Oscar-winning film starring Denzel Washington and Viola Davis – which has a similar pace and style.

Each cast member provided a different mood and presence in the play, with every part well performed. Derek Ezengau in particular I felt superbly portrayed Hambone – a simple-minded man, low on intellect perhaps, but high on principle. Despite his subtle style of acting, my eyes were drawn to him even when not part of the ongoing conversations.

While the play felt like a slow burner, the ending is particularly satisfying.

Without giving it away, in a world of injustice, it feels as though a wrong has been righted, however small. That will do, for now.