Home Theatre Review REVIEW: If you only see one thing this year make sure it’s...
Facebook
Twitter
WhatsApp 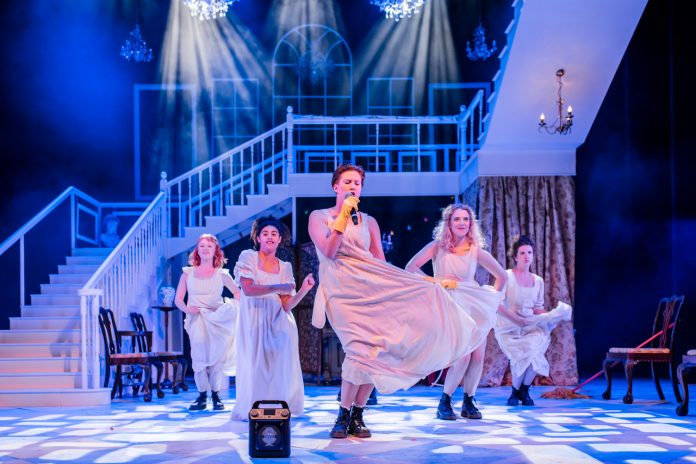 Pride and Prejudice is a sacred text, not to be trivialised, messed with, badly adapted or patronised.

So news that an all female cast were taking on the period classic and bringing it to life through 200 years of romantic pop history in an “Austenite, discotheque bonanza,” could have gone either way.

The young cast would either ruin it or reignite the beloved tale for a whole new generation, without a whiff of Colin Firth, his wet shirt, or a lake in sight.

Novel, refreshing and addictive, tell everyone you know to go

But how? With the kind of ingenuity, insight, humour, respect and brilliant theatricality that lit up both the theatre and the audience from the word go.

We were riveted to our seats from the minute the six servant girls began relating the story of what was going on upstairs, while embellishing the conundrums and scandal of the five Bennett Sisters in their quest for love, with song, laughter and sisterhood.

And yes maybe the swearing, karaoke, swigging from wine bottles, smoking, loud singing and raucous behaviour are not usually associated with the Georgians, but it works, and the devotion to the text and the level of story-telling is second to none.

This is largely down to playwright Isobel McArthur who adapted the Austen prose for a modern day audience, and, judging by the number of school children packing out The Playhouse, it’s working.

Fresh out of drama school, Isobel first staged the piece at the Tron Theatre in her home town of Glasgow.

When ‘Pride and Prejudice (*sort of)’ opened during a heatwave while the World Cup was on, they knew it was make or break, but news soon spread of Isobel’s brilliant new play, and since then theatres all over the country, including The Oxford Playhouse, have jumped on to the co-production band wagon to ensure we all get the chance to see it.

Why? Because it rips along at a cracking pace, introducing the characters in a whole new light. Yes Mrs Bennett is still neurotic, crass and embarrassing, but at least her situation is put in context. Set during the Napoleonic Wars with many men either called up or fighting, she has five unmarried daughters on her hands, yet if her husband dies first they will all be destitute because girls cannot inherit, so her urgency in marching them up the altar is understandable.

The race is on, and what a race and adventure it is.

Cantering through the Bennett’s trials and tribulations, while highlighting the absurdities and rigidities of the age, the cast of six women play 30 characters between them including Mr Darcy and Mr Bingley. Mr Bennett is played by an empty chair with a newspaper, only spoken to occasionally, and wheeled in and out when required.

The likes of Elizabeth Bennett refuse to kowtow to the expected niceties of the age or be patronised by Mr Darcy, Lady Catherine De Bourgh and Miss Bingley, neither will she sacrifice her romantic life for the surety of her family’s future. And while we all know the story, here is it given fresh perspective and drive.

Eliza Bennett, played by the wonderful Meghan Tyler, is a force to be reckoned with – her sharp, surly tongue, Northern accent and confidence, hard to reconcile with the age, but Isobel McArthur allows her to shine as an early feminist.

Another mention must got to Hannah Jarrett-Scott who is absolutely hilarious and riveting to watch. From the long suffering Charlotte Lucas to the uptight Miss Bingley, and the sandwich-short-of-a-picnic that is Mr Bingley, she lights up the stage whenever she appears.

And if the modernity of the setting, or the playlist alarm you, fear not, they provide humour and light relief, as well as some timely lyrics. Think school discos instead of period balls and you’re on the right wave-length.

And yet no part of the story is left untold, as the crisp, cracking momentum continues unabated until the Bennett sisters triumph, holding us in thrall until the very end.

In so doing, Isobel McArthur brings Austen’s novel back to life in a way that both the great author and her modern day audiences can only delight in.

Novel, refreshing and addictive, tell everyone you know to go.

Pride and Prejudice is on all week at Oxford Playhouse. Box office on 01865 305305 or oxfordplayhouse.com.