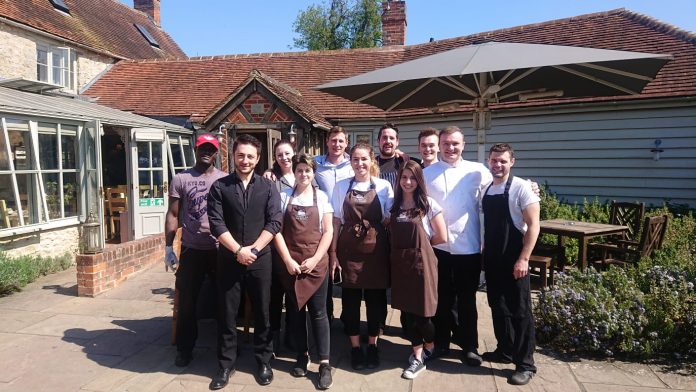 There must be a massive culinary party going on somewhere outside Oxfordshire to which I’m not invited, because some of my favourite chefs are leaving in their droves.

Liam Whittle left The Hollybush in Witney, Dave John Hall departed from Whistlers in Chippy, the entire team deserted Restaurant 56 at Sudbury House, Phil Currie from The Greyhound in Letcombe Regis, Pete Dovaston from The Plough in Witney and finally the legendary Kuba Winkowski from The Feathered Nest.

‘Where are you all going,” I keep asking, frantically throwing things in a suitcase ready to join the mass exodus. “Don’t leave without me.”

And then I realised that this is a migration as old as the hills, that chefs can’t keep still, and moving on is what they do, like a food-obsessed Dick Whittington, piling their Bains Maries and knife sets into a large handkerchief, hoisting it onto a stick over their shoulders and setting off to make their fortunes elsewhere.

Johnny Parke has just been biding his time, finessing his skills, so that when he re-emerged at The Mole in Toot Baldon recently, it was in a blaze of glory.

We go back a while. I know his dad Jeremy who used to run Studley Priory in Horton-Cum-Studley. Johnny is a local lad, educated at Teddies who took over at The Unicorn in Deddington as head chef in 2013 after transforming the shabby pub into somewhere people wanted to eat.

But as we have discussed, these things can’t last forever and he melted away back into the night a few years ago, like Shere Khan in The Jungle Book, until a few months ago when he reappeared at The Mole.

Judging by the reviews, accolades and compliments that have come streaming out of the doors since, he is going great guns.

And having visited twice, once in early summer, when we dined in splendour on potted Salcombe crab with crispy sourdough, Korean chicken wings with a ranch dip, Colchester rock oysters with chimichurri and lemon, and steamed Fowey mussels with smoked bacon, garlic, pier and cream, followed by Moroccan lamb belly salad with pomegranate, feta, mint and pine nuts.

Need I go on? Where else can you find crispy duck and pork salad with bean sprouts, pickled daikon, herbs and peanuts? Quite! Chocolate fondant, cardamom creme brûlée and treacle tart all but finished us off. Not only was it heavenly, but there were flashing red lights going off. This was REALLY good.

The Mole’s subsequent two AA rosettes in April proved it. It was officially on the up.

But last week’s lunch really sealed the deal for me. Sat outside in the courtyard garden surrounded by sundials and lavender, the world was a better place.

And how I gorged. The gazpacho from the specials board was thick and smoky, piquant and summery, and beautiful to behold. The chestnut mushroom and Mole ale rarebit with salsa verde & toast was a DIY fait accompli – a bowl of fondue style cheesy mushrooms, a knife and some toasted sourdough. Take me now.

But then that’s what Johnny does so brilliantly. He finds a classic and adds a twist, not just any twist, but something different, fun and enhancing.

It was the same with the ricotta and pine nut stuffed tempura courgette flower with caponata and tendersteam broccoli – the flower was balanced on the finely diced caponata (spicy aubergine stew) and was served with Monks Beard – like a rural samphire – and locally sourced. Genius. It proved Johnny’s eagerness to not only reintroduce flavours and vegetables but to incorporate them into his dishes. Monks beard also featured in the perfectly cooked stone bass with mash and a mushroom sauce, that had my friend in raptures.

The dark chocolate and amaretto creme brûlée with almond biscotti was probably a step too far, but was worth every calorie laden mouthful.

The bill was £50 a head with lots of rosé thrown in for good measure and coffee, and as we left I realised that while Johnny used to demonstrate such tremendous promise, he has now delivered by growing into a brilliant chef.