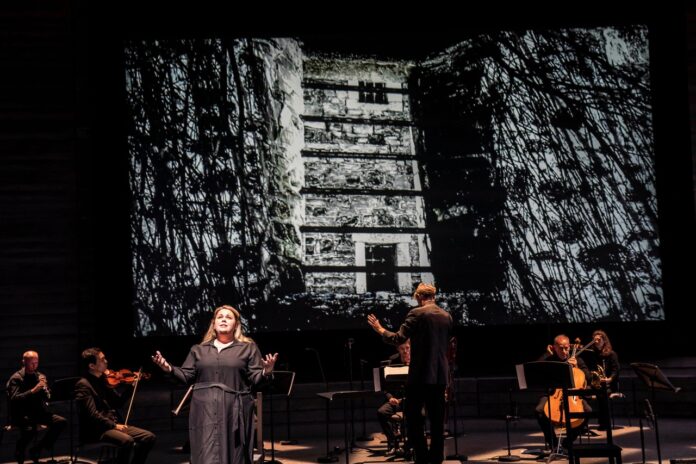 After a summer of cancellations, it was a rare and unexpected treat to be back at Wormsley this week for Beethoven’s Fidelio.

Originally planned for Garsington’s main season as a revival of John Cox’s 2009 production, this is a scaled-down, concert version, with a reduced orchestra and a socially distanced audience, but in a year as strange as this one it’s remarkable that it’s happening at all.

GARSINGTON OPERA DESERVES A HUGE ACCOLADE FOR MAKING THIS HAPPEN

What is even more remarkable is that this version, with its enforced simplicity, succeeds on its own merits.

Peter Mumford’s minimalist staging and lighting are powerful and direct, intensified by haunting, evocative images of the prison projected onto a screen at the back of the stage.

In his director’s notes, Mumford highlights the problematic nature of the dialogue, which he feels interrupts the natural flow of the drama.

His solution in this production is to replace the dialogue with narrative text interwoven with the projected images, avoiding those ‘dramatic interruptions’ and letting the central themes – the importance of liberty, hope and courage – to come through with greater clarity.

The lack of interval also gives the piece a welcome continuity that further heightens the drama.

“IN HINDSIGHT THIS OPERA, WITH ITS MESSAGES OF LIBERTY AND COURAGE, WAS AN INSPIRED CHOICE”

The performance suffers from the lack of physical and emotional interaction, but the soloists, spaced across the front of the stage within separate pools of light, do their best to bring out the dramatic intensity of the piece and to showcase what must surely be some of Beethoven’s most glorious music.

Katherine Broderick makes an impressive role debut as Leonore, the brave and loyal wife who disguises herself as Fidelio to free her husband, Florestan, from his illegal incarceration by Don Pizarro.

Dramatically and vocally compelling, she effortlessly dominates the stage with some stirring and electrifying moments. Toby Spence gives an intense, anguished Florestan, his despair at his hopeless situation, confined to a dungeon cell with no light and little nourishment, clearly felt.

The reduced Philharmonia – just 13 players – manages to sound like a full orchestra, producing a gloriously rich sound under the energetic direction of Douglas Boyd

Galina Averina delights as a sweetly-sung and immensely appealing Marzelline, and she is well matched by Trystan Llyr Griffiths as Jaquino. Stephen Richardson gives a strong, captivating performance as Rocco, Richard Burkhard is suitably authoritative as Don Fernando, and Andrew Foster-Williams plays the villain of the piece, Pizarro, with relish.

The reduced Philharmonia – just 13 players – somehow manages to sound like a full orchestra, producing a gloriously rich sound under the energetic direction of Douglas Boyd, whose enthusiasm is such that he is almost dancing on the podium.

Beethoven’s 250th anniversary, which should have been dominating the classical music world this year, has been sadly sidelined by Covid-19, so this late summer treat is all the more welcome, and Garsington Opera deserves a huge accolade for making this happen.

As we continue to battle coronavirus, enjoying our freedom but fearing new lockdown rules, the parallels with Florestan’s incarceration speak to us with particular resonance.

No one could have foreseen what was going to happen this year, but in hindsight this opera, with its messages of liberty and courage, was an inspired choice.

Fidelio continues until September 20, and will be broadcast by Radio 3 on September 26.