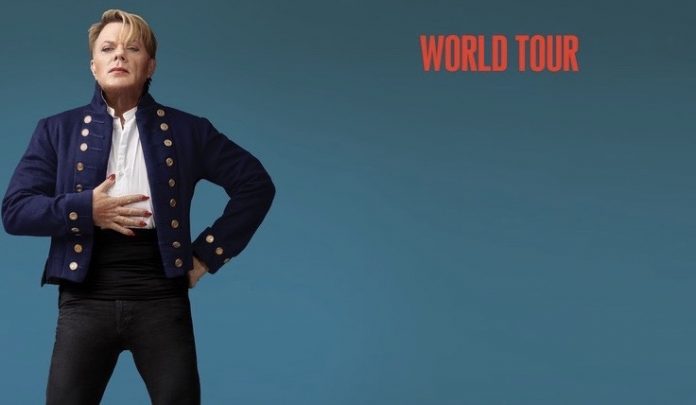 Sauntering onto stage with hot pink false nails, a tartan miniskirt and leather thigh-high boots – his muscular legs proudly on show from all that marathon running – no one could ever accuse Eddie Izzard of not making an entrance.

“This is my last tour before I go into politics” he announces almost immediately. “I don’t know what I can do – I can definitely do more than nothing,” he announces.

His positive outlook in the face of such a depressing political landscape radiates throughout the night, with him urging us throughout to embrace this within ourselves. “You know me, I’m a relentless bastard, and that’s the tactic.”

“this century we are either going to wipe ourselves out – goodbye humanity – or we’re going to we’re going to make it a fair world for 7.5 billion people. It’s one or the other. So, choose your side.”

“I’m not into Brex-hate, Trump-hate… Donald Trump, Boris Trump, Nigel Trump, I’m against them all – so we’ll fight that family.” If you know anything about Eddie, you’ll be aware of his political viewpoints as a fervent Europhile and Remainer; and while he largely stayed away from making any jokes about politics, it was these serious sorts of comments that got the strongest applause from the audience.

In opposition to Trumps infamous slogan, Eddie has created his own ‘Make Humanity Great Again’ blue hats, sold amongst other items at the merchandise stall, the proceeds of which he told us were going to The People’s Vote, for a third referendum (the first being in 1975, “which everyone’s forgotten”).

It seems he still enjoys touring his comedy, but now has his sights set on something a little more serious.

So, why the name ‘Wunderbar’ for this show? He explains: “At a time when half of our country and half of America have said “let’s try 1930s politics again shall we? Let’s have another bash at that – how did that turn out last time? Anyone watched a DVD?” – I thought I should reach back into that time and take a word from the German language which was used and abused by the Nazis, take it in a positive way – ‘Wunderbar’ – which of course means wonderful.”

Defining himself as gender fluid in his programme (he doesn’t mind which pronouns people use in reference to him – also using the terms transgender and transvestite interchangeably throughout the night), it’s impossible to miss that tonight Eddie is sporting some rather impressive breasts. Referencing that wunderbar sounds very similar to Wonderbra – “which is very close to my heart” he teases: “I know what you’re thinking, where did you get that necklace?!” – the audience interrupts his flow with loud laughter – “Brighton actually, a shop in Brighton…” pausing for dramatic effect, he continues: “My bosoms! Yes, they are from Ikea – and they come with assembly instructions, and a spirit level.”

From the big bang to dinosaurs, the first speaking humans and plenty more, Eddie packs in different subjects at an almost dizzying rate, bouncing off one topic before often returning to it later.

Onto politics again he says: “I’m going to try to get a seat in this election” – but if he can’t, he will try again. “I’ve said for ten years I’m going in, so I’m going in. I’m going in kids! And we’ll see what happens.”

He sighs. “We’re Great Britain, not Little England. We’ve got to fight this f***ing thing. You know? That’s what I think. We have to be brave and curious, and not fearful and suspicious. Otherwise I wouldn’t have got here.”

Despite enjoying his set, after a while it felt to me as if his routine didn’t have a particular structure, as funny as it was.

He tells us that he doesn’t write his shows, but begins them initially in improvisation.  According to the programme it’s clear that he is aware that sometimes his ramblings stray a little too far from the centre of the joke.

In fact he grins as he goes off on tangents within tangents, before realising he has forgotten what he was meant to be talking about.

Another topic is religion; he repeatedly speaks of there being no “floaty” God – “there is no plan, just weirdness” – as he takes us through his jumbled version of the history of the universe; and of his past adventures – the next being sea swimming.

Amongst the silliness were some more poignant, sweet moments, of memories of family life as a young child, and the sad fact that there was 50 years between the death of his mother and father, his dad dying last year. Of his mums’ premature death, he muses that “quite often, the good people go and bastards go on, and on, and on, like [Robert] Mugabe, who died in his bed, having raped his country…” He’s certainly not afraid to mince his words.

Apart from the personal anecdotes of the likes of his marathon running et al, the rest is pretty much nonsensical, with a few gems grenaded in. Not that he didn’t get plenty of laughs from the crowd.

In fact, a sizeable part of the evening was Izzard creating Pingu-esque sound effects and motioning, but still just about managing to make sense to us.

With an outfit change for the second half, he continues in much the same vein as before, occasional political statements, part inspirational speaking, part tomfoolery.

He genuinely appears to want everyone to do whatever they can to make the world a better place, but manages not to sound preachy – he’s doing what he can too. As well as encouraging us to sign up to Unicef, of which he is a patron, he makes a plea to us: “If you find Brex-hate and Trump-hate negative things, I encourage you – there’s a negative gravity to these things, but it gets people going. The young people are getting politicised, they’re getting old enough to vote, it’s changing everything at the moment.

“There’s more people in this country now who are against Brexit than for it, this is the latest polls of polls of polls… if you want to push back, push back against the negative of that; and go and do something positive.”

Izzard declares that if Trump is going to say “horrible things” then he is “going to say the truth; and I think this century we are either going to wipe ourselves out – goodbye humanity – or we’re going to we’re going to make it a fair world for 7.5 billion people. It’s one or the other. So, choose your side.”

Having developed some of his material for this tour first in French and German, he knows that while trying to make his comedy universal, his particular style isn’t ‘necessarily everyone’s cup of tea’ – but you can’t deny his conviction and ability to conquer anything he sets his mind to, is to be admired.