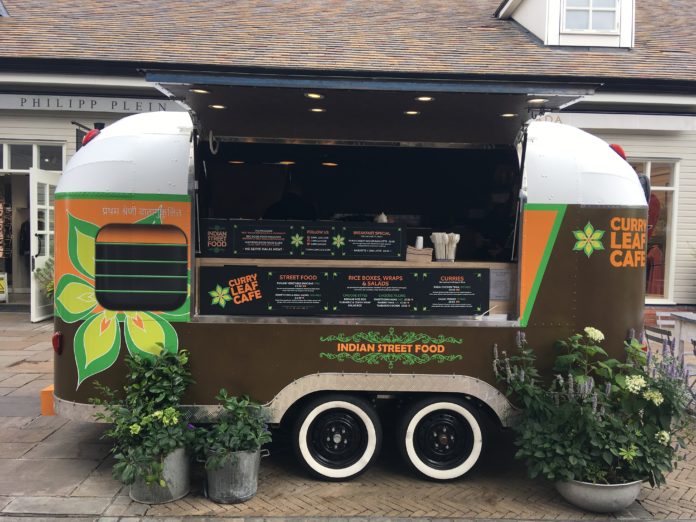 News that Curry Leaf Cafe was opening at Bicester Village had me hot-footing over faster than Usain Bolt on a start line.

Three cafes later, it expanded to Oxfordshire in May, bringing its award-winning take on Indian street food to Bicester Village, in the form of curries, wraps, salad boxes and craft beer from a purpose-built trailer inspired by classic Indian train carriages.

This new six-month residency coincides with the start of Bicester Village’s ‘All Things India Festival’, in which Indian fashion designers and artists celebrate the very best in contemporary Indian design.

Bicester Village has been making great efforts to cater for its hugely international clientele recently and their varying budgets and tastes. Hence The Wolseley opening last year, followed closely by Shan Shui, a Chinese restaurant.

But in the summer, street food comes into its own, and is paraded at regular intervals up the ever burgeoning shopping avenue, where you can find everything from pancakes and macaroons to noodles and Lebanese.

Curry is the most recent addition and the enticing , colourful Curry Leaf Cafe truck sells everything from breakfast and snacks to full blown meals.

As it was lunch time, we settled at the tables outside, scattered the length of the walkway, and ordered a bit of everything.

From the ‘street food ‘ section, veggie samosas which came with a choice of sauces from a traditional mango chutney to tamarind or chilli and garlic.

There were also sweet corn vada which we tried in a turmeric and cumin wrap, (£7.50) with a vegetable thoran ( sautéed carrot, green bean and cabbage) with red onion, sev noodles, crispy onions and chutneys.

Huge and yellow, juicy and moist, it was a generous portion and we only managed three quarters.

Ditto the tandoor chicken wrap, (£7.95) the meat moist, perfectly seasoned and cooked, it was an instant hit, the onions giving it a nice crunch.

The curries came in cardboard containers with rice and a side sauce of your choice. I had the paneer tikka in a biryani rice box and its was delicious. Lashings of hot fiery sauce, offsetting the chewy cheese perfectly.

The vegetable somsoas (£5.50) were interesting – more pastry parcels than filo triangles, needing a cool drink to wash them down with.

The bill was £34 for three, more than you’d pay on the streets of Delhi I’m sure. But then Curry Leaf Cafe is a law unto itself these days and certainly fits in.

But hurry, because it’s only there for six months. After that who knows, maybe Curry Leaf Cafe will expand to open in Oxford itself.