Home Eat RESTAURANT REVIEW: Are you a lion or an elephant? Find out at...
Facebook
Twitter
WhatsApp 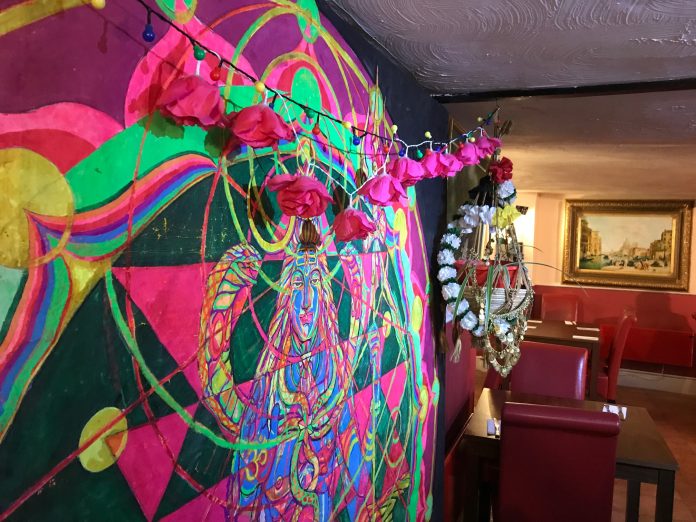 “Are you a lion or an elephant?” The question was asked by Jaya Patel in her new restaurant Delhish, having asked if the carnivores would have come knowing it was vegetarian.

The answer was no.

“Lions eat meat and sleep all day. Horses and elephants thrive and work. They are vegatarian,” she told them. “Which one are you?”

Delhish doesn’t pretend to be anything that it’s not. It is quite simply a vegetarian Indian kitchen serving some stunningly simple food

It was a good question, considering our journey there. News that we were dining at a vegetarian Indian restaurant had gone down down like a lead balloon, the truth escaping on the train to Bicester.

There was a stunned silence, followed by cries of outrage. ‘Why?’ ‘If we’d known we’d never have come?’ ‘What’s the point?’ ‘Can we get a kebab first?’ ‘Why didn’t we just go to our local curry house?’ echoing around the carriage, as my friend frantically read out the glowing reviews for Delhish, many by meat-eaters, all applauding the new curry house, and bar none, sincerely recommending it, regardless of your culinary persuasion, to no avail.

As it had just been voted one of Oxfordshire’s Top 25 restaurants in the Good Food Guide this week, it came highly recommended.

Incredible really in this day and age when vegetarianism is the biggest growing food market, and as veganism also comes into its own, that some remain so resolute..

When pressed, the carnivores said they just weren’t interested, that vegetarians have an option wherever they go, but in this instance they didn’t. We placated, they protested, the hysteria grew. Fellow passengers were wiping away tears. I was pleased to finally reach Bicester.

The 12 minute walk to Delhish from Bicester Village station, was accompanied by much grumbling and as we walked passed a rival curry house, the boys threatened to dive in and get a takeaway. I know – cavemen.

By the time we reached Delhish Vegetarian Kitchen, where Piccolo Amore used to be in the old Six bells Pub on Church Street, I was increasingly nervous. What if it wasn’t as good as everyone said? What if the Good Food Guide 2020 had got it wrong?

Arriving didn’t allay my fears. The former Italian restaurant was much in evidence with its red seating and Venetian paintings. Yes there were some Indian lights and decorations but it was a bit of a mish-mash, as if they were camping there instead of inhabiting it, a bit of a temporary feel.

Neither could you buy a pint, Corona and Kingfisher coming in bottles.

My favourite question of the night however, was to Mr Greedy. “Would you like the Indian or vegan red wine?” You can imagine.

The menu was impressive, but to a carnivore bewildering. Like asking a bear to choose a white nightie in a department store.

The thali (£30 for two) consisted of starters, mains and dessert, so we ordered six, with free top-ups of anything we liked or ran out of, some pani puri thrown in for good measure, and waited. Let them do the choosing for us.

The pan puri arrived first, the crispy hollow balls served DIY so that you had to fill them with the pickle, the yoghurt and the home-made Bombay mix yourself.

They were an instant hit, the textures and tastes, the sharp, sweet, crunchy, sour tastes all mingling together. You have to eat them whole or they dribble down your chin. Brilliant.

Then a plate of tiny pasties, pureed, smooth and fragrant, unexpected. Another favourite.

The Khaman Dhaka was a sliced savoury cake – light and spiced steamed chickpea and yoghurt sponge with chutney and tamarind sauce.

A dish of home-made poppadoms, again with yoghurt, pickles and chutneys and the vibrant green coriander chutney which I could eat with a spoon,

All derision had stopped. There was just an interested silence as we tried each dish on-by-one, marvelling at the new tastes and textures, the experience and novelty of eating something for the first time, the surprises coming thick and fast. The lions were shrinking.

The thali curries arrives as a four, a lentil, an aubergine, a Bombay aloo, and a peas and beans combo, accompanied by tiny rice and a plate of roti, a tomato salad and some round puris.

The bombay aloo won hands down. The aubergine – an Italianised hybrid didn’t really work for me and the remaining two needed more flavour. I needed a dahl, and a vegetable curry that was thick and saucy. But we ate it all. It was good, but had been eclipsed by the dazzling array of starters.

Dessert was another trio – all vegan – a sponge drizzled in fresh mango and passionfruit, a chocolate slab of creamy pave made of nuts, and a sticky strawberry and chocolate pudding, dense, sticky and wonderful.

Jaya came out to see if we’d liked everything. She is the most unassuming, humble, sparkling, passionate personality. Her love for her food shines through. Her cooking hails from Gujarat, where she comes from, and having cooked for her family and husband she decided to start cooking for us as well.

Having only opened a few months ago, The Good Food Guide was right. Delhish is really special. It’s hard to quantify because its charm lies not just in its food, but it’s honesty.

It doesn’t pretend to be anything that it’s not. It is quite simply a vegetarian Indian kitchen serving some stunningly simple food.

Otherwise the question remains – Lion or elephant? I’m an elephant all the way.

Delish, Oxfordshire’s only vegan and vegetarian Indian restaurant is at 7 Church Street, Bicester. 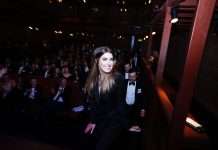 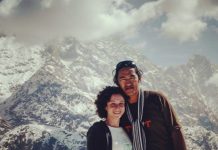 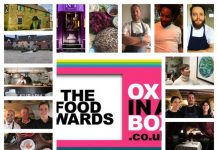 Here are all the finalists in the Ox In A Box Food Awards, just 24 left in eight categories, but who will win?